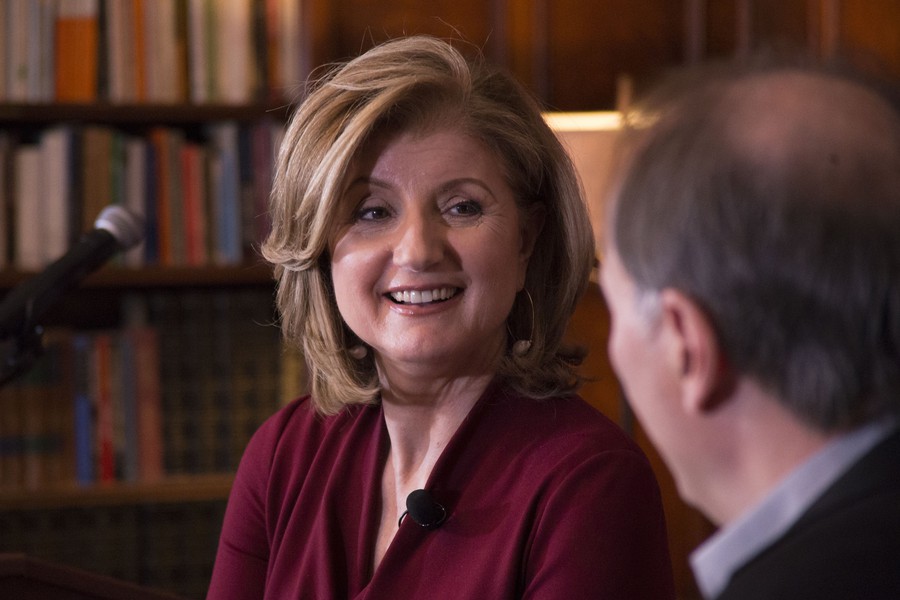 Courtesy of The Institute of Politics

On April 28, Arianna Huffington spoke with Institute of Politics (IOP) director David Axelrod about her new book The Sleep Revolution at the Quadrangle Club to a crowd of about 70 students.

The co-founder and editor-in-chief of The Huffington Post used to run a tight schedule on only four hours of sleep a night, but received a wake-up call nine years ago when she collapsed in her home and broke her cheekbone due to sleep deprivation.

Huffington wants to promote a culture shift around sleep. She believes that since the Industrial Revolution, people have focused less on getting enough sleep.

“The mythology of our culture is that we believe someone out there, most likely the Wall Street people, can get the job done on three or four hours’ sleep,” she said. “So they naturally think that it is okay to sleep less and feel tired.”

Apart from addressing misconceptions society holds about sleeping, Huffington said she also included scientific data in the second half of her book to bolster her claim that our society has inaccurate perceptions about sleeping. Huffington clarified that, in contrast to what is popularly believed, our brains are not dormant when we are asleep. “Sleep is a time of frenetic activity in the brain,” Huffington said. “It is cleaning out the ‘garbage,’ so to speak.”

She said that the importance of sleep is now especially relevant. According to Huffington, more than 2,500 scientific sleep centers in the world have been built since the first one was established in Stanford in 1970. These centers comprise research, clinical, and educational programs geared to advance the field of sleep research and medicine.

According to Huffington, big companies are also noticing the issue of sleep deprivation and urging their employees to sleep more. Huffington noted that Mark Bertolini, CEO of health care company Aetna, has given each of his employees a Fitbit wristband to track their sleep. Employees receive a $25 bonus for every night they get seven or more hours of sleep. Making a similar effort, McKinsey & Co. has hired a sleep specialist who ensures that the executives do not overwork. “The sleep revolution is happening,” Huffington said.

At the end of the discussion, Huffington gave the audience some advice on sleeping. She reiterated the importance of sleep rituals, a series of actions such as bathing, getting into pajamas, and reading a (paper) book, before going to bed. Huffington especially stressed the importance of putting away technological devices when it is time to sleep. “It is crucial to not let your day life intrude [on] your sleep.”

Huffington urged students to realize as soon as possible that sleep is more important than achievement. “No one says at a funeral ‘George was a great man; he increased the market share by one-third,’” she said. “Your eulogy is not your résumé.”