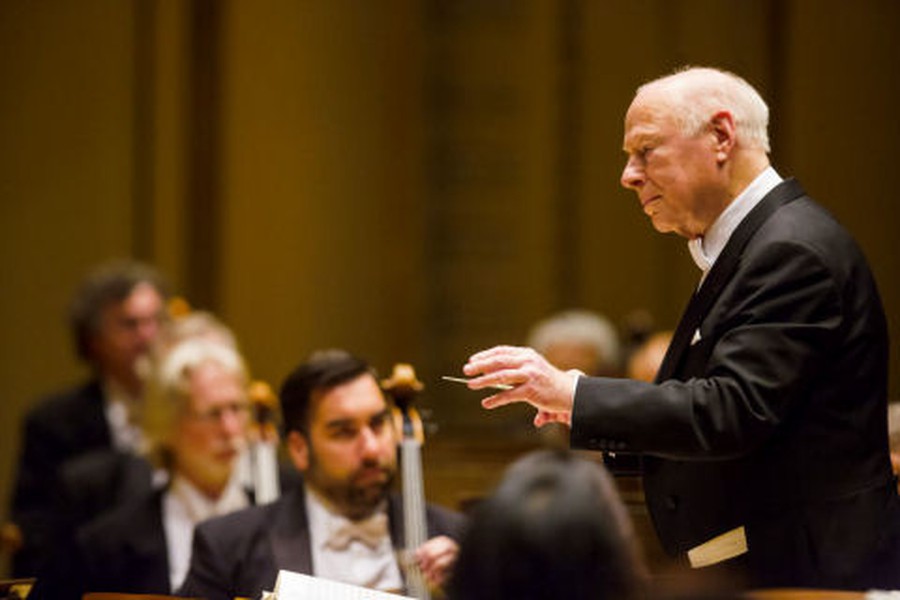 Bernard Haitink, pictured here from a 2007 performance with the CSO, led the orchestra in Strauss’ epic Alpine Symphony.

It’s the Edward-or-Jacob question of classical music. Which has more value: music for its own sake or music as representation? Last Friday’s Chicago Symphony Orchestra (CSO) concert offered an accessible—yet philosophically rigorous—program of Mozart and Strauss to explore this very theme, commanded by Dutch conductor Bernard Haitink.

The question boils down to form vs. function: music is beautiful either a) by virtue of its being music or b) by arousing the senses. Mozart’s Piano Concerto No. 22 is an example of the first, which elicits enjoyment primarily by relating the music to itself in such terms as melody, rhythm, and structure. Think of the music like banter on a first date—it doesn’t necessarily mean anything.

Austrian pianist Till Fellner brought considerable lyric intelligence to the Mozart concerto, pairing expressive clarity with naturalistic phrasing throughout. Though unproblematic, his playing lacked a sense of newness. The joy in hearing Mozart comes from hearing him for the first time. His strongly intuitive musical writing surprises and satisfies; you are convinced that each note is beautifully, sublimely in place—that it must be so. You take Mozart for granted, because he seems so obvious.

The challenge in playing Mozart is playing so that the audience hears it again for the first time. Fellner’s third movement was most successful in this regard: he conveyed a coquettishness in the rondo theme that infused the familiar tune with infectious energy. Haitink lent deft support from the orchestra, coaxing upbeat chatter from the flute and bluster from the bassoons. Yet Fellner’s cadenza felt overly prepared despite genuinely surprising thematic content. (A descending sequence of the rondo tune in retrograde!) His delivery felt less than spontaneous—a quibble, to be sure, but one that designates his interpretation as more standard than sensational.

Following Mozart is a Strauss tone poem, or a symphonic poem, among the best examples of music as representation. Think of them as film scores sans film—music alone conveys action and atmosphere to an audience. Listening becomes an active process of discovery. The composer gives you an itinerary, or program, to his work; he leaves the task of completing it to your imagination.

An Alpine Symphony packs a mountain trek into 50-odd minutes of music. Strauss marks the piece into 21 continuous episodes, from glorious sunrise to thicketed trails to a stormy descent. Central motifs maintain unity and indicate changes in atmosphere: to invoke a mountain pasture, Strauss modifies the climbing melody for English horns (suggestive of yodeling) and sets it over cowbell and fluted birdsong.

Coy but adventurous, An Alpine Symphony takes effort to put on. Intermission added about a hundred musicians to the stage, not to mention more than a dozen pieces of offstage brass (Mozart only needed, like, 20 violins). Haitink led the 150-odd musicians with extraordinary sensitivity. The sheer physical force of his orchestral sun pins you to the seat—brazen brasses full-blast, horsehair fracking first fiddles in half. Yet he also extracted moments of extraordinary delicacy, coaxing from the strings a satiny transparency suggestive of mountain mists.

Awe. Awe at the scale of the work, from its vaunting peaks to après-ski. Awe at the cohesion of the orchestra, at the seamlessness with which you pass from forest to glacier to summit in the soundscape. Awe at the composer as a narrator and the conductor as a storyteller.