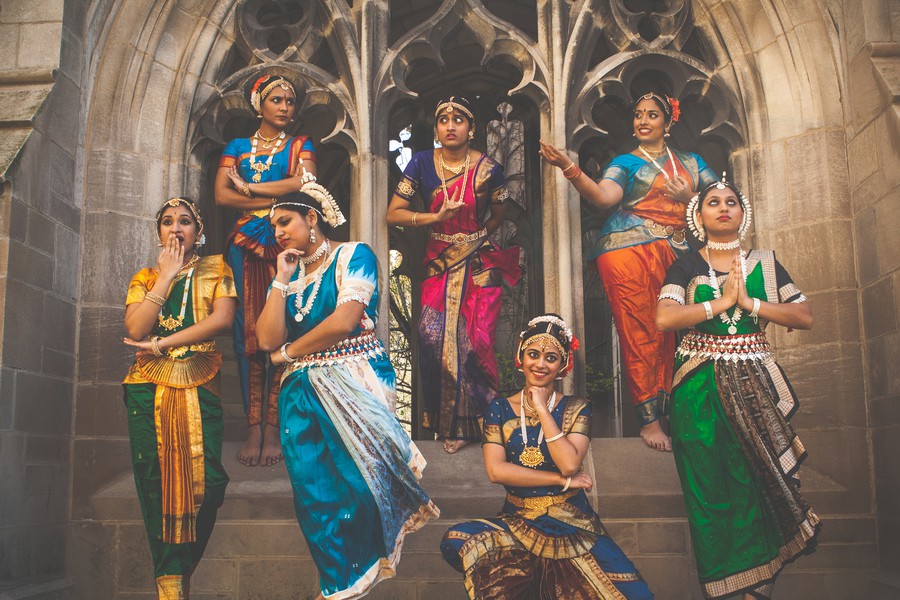 “The show was first conceptualized as a way of uniting two pretty different aspects of classical dance: the storytelling elements and the elements of pure dance that showcase technique,” explained fourth-year Mythili Vinnakota, a member of the Apsara board.

According to Vinnakota, the steps in a classical dance usually separate the process of illustrating the narrative being told and featuring technical skill, instead of doing both at once. The idea to go against this stereotype was what inspired Apsara to explore the Navarasa, the nine classical emotions of dance that are usually explained through abhinaya (“dance storytelling”) and nritta (“pure dance”).

Eight emotions were featured in the show: happiness, anger, wonder, fear, heroism, love, sorrow, and peace. Each dance was choreographed to reflect that particular emotion.

“The moves we came up with had to convey the emotion desired,” said third-year Elora Basu, who co-choreographed Happiness and Love. The emphasis was therefore primarily on the dance instead of more traditional indications of emotion, like facial expressions.

Similarly, the music that accompanied each dance also influenced how it was performed. Although the audience may have wondered why the dancers did not look particularly angry when dancing during Anger, Vinnakota explained that the song to which it was danced, “Radha Kaise Na Jale,” describes the jealousy that the Hindu goddess Radha felt towards Krishna.

Although the dancers choreographed their dances to reflect classical emotions, their performance was interspersed with modern elements.

“I was trained in ballet as well as bharatanatyam, so [I] was dying to choreo fusion,” said Vinnakota, whose choreography of Fear had the performers dancing to the Foo Fighters’ “Let it Die,” using elements of Western and classical Indian dance. Similarly, two performers danced to a mashup of A.R. Rehmnan’s “Tere Bina” and Rihanna’s “Stay” during Love.

Before each dance, an excerpt from Chilean poet Vicente Huidobro’s magnum opus “Altazor” would be read in a performative way to indicate the mood that would follow. Explaining the reasons behind the poetic interludes, Vinnakota said that she had read “Altazor” in Hum as a first-year and fell in love with the way it wove emotions through pure words.

“I thought it was fitting that my last show [would] use “Altazor” to further highlight the emotions [...] and narrate the show,” she said.

Second-year Noel Rubio, who performed the lines, was given artistic license to interpret the text. Using a few feeder lines from the epic, he crafted the script based on the storyline and emotional elements reflected in the choreography.

“My goal was to string together the right amount of excerpts to form a cohesive but concise storyline [and convey] a journey toward nirvana,” he explained.

A sense of collaboration underpinned the production: Vinnakota credits Apsara’s teamwork to UT for enhancing the way they told the story through lighting. As a theme, collaboration can be felt throughout the show, from the fusion between classical and contemporary music to the combination of storytelling and technique to the union of dance and poetry. Apsara has indeed reimagined and explored a classical art form through Navarasa.