After his hearing, Kissinger spoke to a rally that formed outside Levi to support him. 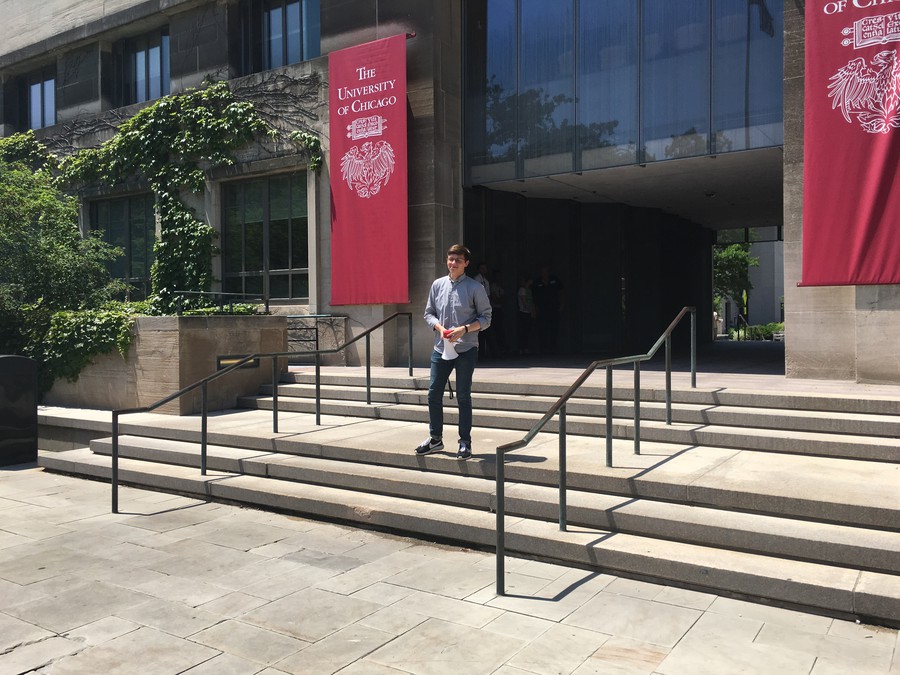 After his hearing, Kissinger addressed a rally of his supporters.

Fourth-year Student Government (SG) President Tyler Kissinger has been placed on disciplinary probation after he used his SG title to allow protesters past a locked door in an administrative building during a protest on May 19. Kissinger is still expected to graduate tomorrow.

A New York Times article published Wednesday said that Kissinger was “threatened with expulsion,” prompting outrage toward the administration on and off campus. Nearly 200 professors signed a statement calling for the charges against Kissinger to be dismissed, and 3,276 people signed an online petition along the same lines. Presidential candidate Bernie Sanders (A.B. ’64), who clashed with the administration during his time at the University, tweeted his support for Kissinger. In a statement to the Chicago Tribune, a University spokesperson said that students are not presented with a specific sanction, such as expulsion, when they are summoned to a disciplinary hearing.

Exiting the hearing, Kissinger was greeted with cheers by a crowd of around 75 gathered outside Levi Hall, the building where the May 19 sit-in was held. A CBS reporter and two cameramen stood with Kissinger's supporters. Kissinger addressed the crowd with a short speech. 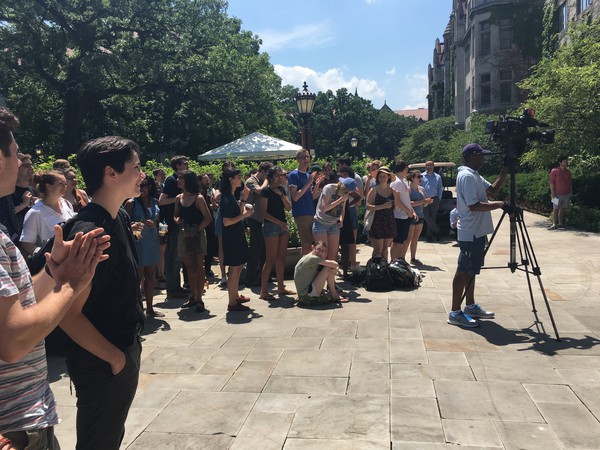 Supporters and members of the media gathered outside of Levi Hall before the hearing ended.

“I just heard back from the committee and they decided that I will be put on disciplinary probation, which means that for the remainder of my time as a student at the University of Chicago I need to follow policies, but that I will be permitted to graduate tomorrow,” Kissinger told the crowd through a megaphone. The rally was organized by the IIRON Student Network (ISN).

According to the Student Manual, students on disciplinary probation may be restricted from the exercise of some student privileges and rights at the discretion of the disciplinary committee. The student’s probationary status must be considered in any subsequent findings of misconduct.

“I think I can say [the meeting] lasted a good while, but other than that I don’t know that I’m really permitted to disclose much about the actual meeting itself,” Kissinger told The Maroon after his speech.

Asked whether he regretted using his SG access to Levi Hall to allow protesters in the building, Kissinger responded that he struggles with the question.

“I hope no one in the future is put into that position again. I think this faculty letter came out—180 faculty in support—and one of the things that they noticed is that students should have access to university buildings, university space,” Kissinger said. “I am hopeful that means that people are able to move toward a university hall, an administrative building that’s accessible to everyone. I also hope this means more public meetings, more open meetings, less cancelled ones. We weren’t able to meet with President Zimmer this quarter and I don’t think that facilitates speech.”

A summons issued to Kissinger cited his “premeditated and dishonest behavior to gain entry to Levi Hall, creating an unsafe situation.” The hearing took place this afternoon, one day before the Class of 2016’s graduation ceremony. The only other students cited for trespassing in recent years, according to the the University disciplinary reports available online, also received probation in the 2014–15 school year.

University spokesperson Jeremy Manier released a statement to The Maroon that read: “Freedom of expression and dissent are fundamental values of the University of Chicago, as reflected in the Report of the Committee on Freedom of Expression. The University’s policies do not prevent students from engaging in protest, and the University does not discipline students for speaking out on any issue. Any suggestion otherwise is simply untrue. All students are expected to follow the policies set forth in the Student Manual.”

On May 19, ISN organized a rally after administrators were invited to a public meeting to discuss University policy and did not attend. Before the rally, Kissinger entered Levi Hall, telling security guards that he had to attend to SG business. Kissinger told The New York Times in an interview that he hid in the bathroom for a few minutes before using his backpack to prop open a door to let in 33 other protesters.

The demonstrators, both students and alumni, staged a sit-in outside of Provost Isaacs’s office and called for a meeting with the administration. The protesters arrived equipped with adult diapers, blankets, and food. The sit-in ended after about an hour, when Associate Dean of Students in the University for Student Affairs Belinda Vazquez warned the protesters of potential arrest or disciplinary action, including expulsion. The protesters were escorted out of the building by UCPD officers.

Among the protesters’ demands were fossil fuel divestment, the revitalization of Student Disability Services, the end of discriminatory UCPD policing practices, and a $15 per hour minimum wage for University employees. Protesters marched from Ratner Athletic Center to Levi Hall, calling on the University to democratize the decision-making process by including students, faculty, and staff in discussions of these matters.

Kissinger’s battle with the administration garnered national attention following the New York Times article and the subsequent endorsement from Bernie Sanders on Twitter. Sanders retweeted the article, writing “Progress takes place when young people pick up the torch and say, ‘This is a world we are going to change.’”

After his speech, Kissinger expressed optimism regarding the future of the relationship between the administration and student body.