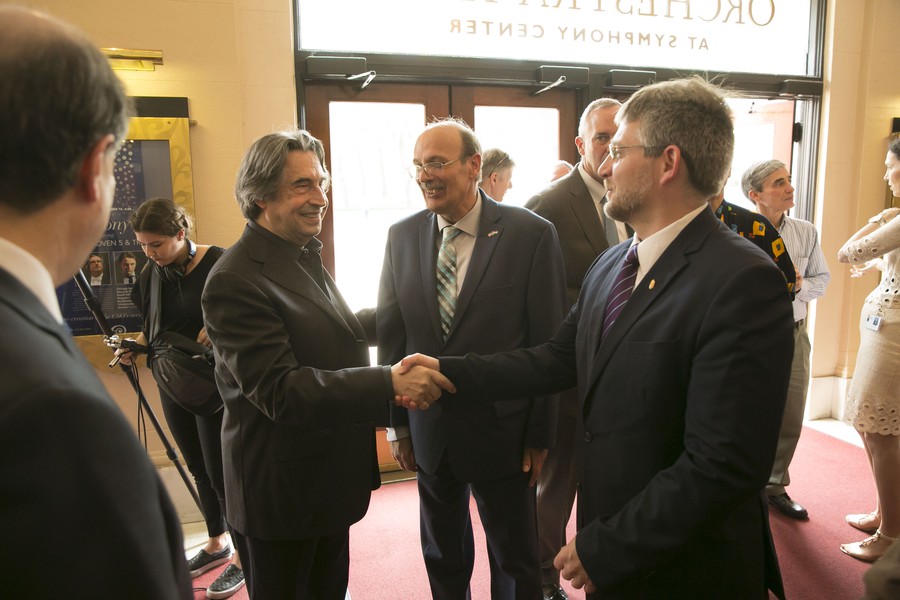 Riccardo Muti praises Reiner's legacy next to the Symphony Center's new bronze likeness of the maestro.

The bust is the handiwork of Hungarian sculptor Katalin Gerő, mounted on a plinth designed by Chicago architect Laurence Booth. The statue was commissioned at Muti’s suggestion as part of the CSO’s continued 125th anniversary celebration, which formally concludes next fall.

During a press conference in Symphony Center’s outer lobby, where the bust is installed, Muti called Reiner “one of the greatest maestros in the history of conductors.” Though Muti had not met Reiner, he recalled being shaped by Reiner’s recordings with the CSO as a conservatory student in Naples, long before his own future on the podium was even a thought in his mind.

“We couldn’t believe that an orchestra could play at such a level of refinement, perfection, and sensitivity,” he said. “It was like listening to something from another world.”

Alexander affirmed Reiner’s legacy. “The CSO we hear today we are hearing and enjoying because of the input and great leadership of Fritz Reiner,” he said.

Prior to the commission, Reiner’s historic tenure was sorely under-acknowledged at and around Symphony Center. Orchestra Hall is named after the CSO’s first music director, Theodore Thomas, and Sir Georg Solti Garden sits at the intersection of Jackson and Michigan, just down the street from Symphony Center and complete with its own bust of the eighth music director.

“There was no sign of somebody who had made this orchestra,” Muti noted. “It was a great orchestra before, but… the legend of the Chicago Symphony [in the international community] was made by Fritz Reiner.” 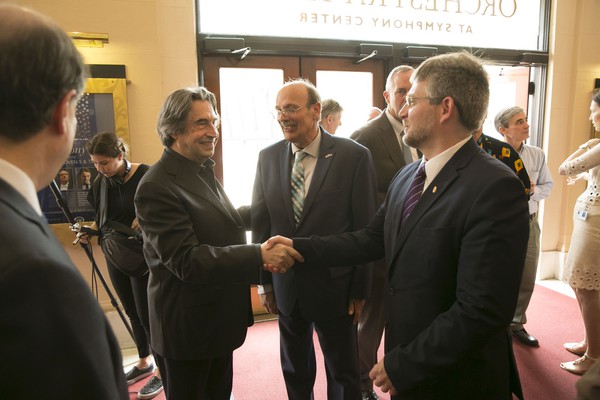 Before and after the unveiling, Muti congratulated Gerő, who was in attendance alongside Hungarian Consul General Szebényi Ferenc and his Deputy Chief of Mission Adam Markusfalvi-Toth.

“The expression is very tough, because some of the musicians still remember!” Muti quipped. (His comment was a nod to principal keyboardist Mary Sauer, harpist Lynne Turner, and principal trombonist Jay Friedman, who are the only remaining CSO musicians to have been appointed by Reiner. They are among the longest-serving orchestral musicians in the country.)

Born in Budapest in 1888, Reiner was the music director of the CSO from 1953 to 1962. While a student at the Liszt Academy, he studied piano with Bela Bartók, and he later worked with Richard Strauss while chief conductor of the Dresden Staatskapelle from 1914 to 1921. He would become a noted interpreter of both composers’ music. After immigrating to the United States, he also served as music director of the Cincinnati and Pittsburgh Symphonies, as well as principal conductor of the Metropolitan Opera.

Reiner served as musical advisor for the CSO during the 1962–63 season, just before his death on November 15, 1963. A memorial concert scheduled for November 28, 1963, became a joint memorial for President John F. Kennedy, who had been killed in Dallas six days earlier.