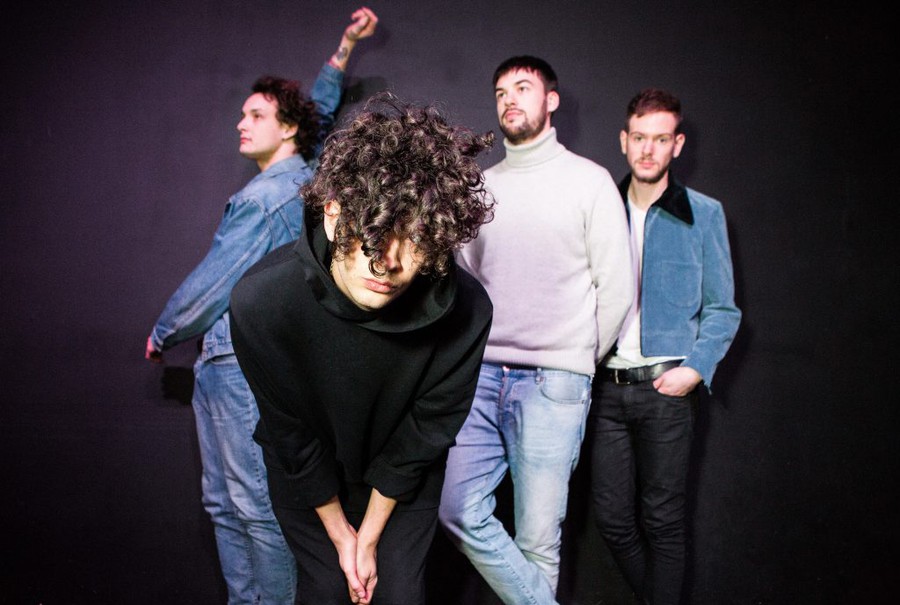 The 1975 appeals to a fervent fanbase of young women—most of whom weren't even alive in 1975.

I have a unifying theory of The 1975, but it won’t make sense if I come out with it right away. It is, in essence, an answer to the following question: Why do the teenage girls who make up The 1975’s core fanbase like the band so much?

I don’t mean to be condescending, nor do I mean to imply that all teenage girls like The 1975, or even that all of The 1975’s fans are teenage girls. I’m still a teenage girl, and I was friends with all of my friends when they were teenage girls. I also respect the sacredness of fandom: you don’t give out your undying love to someone easily, and you certainly don’t do it unless you get something back.

I had this question coming into The 1975’s Lollapalooza aftershow at the House of Blues for a few reasons. First of all, I, a teenage girl, have gone back and forth about The 1975 since 2013. I liked their first four EPs and their 2013 self-titled debut album.

When I started reading music criticism, however, I was shocked to discover that my two trusted sources—NME and Pitchfork—had it in for The 1975. Pitchfork gave “The 1975” a 5.9 out of 10, and NME awarded The 1975 the highly prestigious Worst Band Award. I was devastated. All the same, the people at Pitchfork and NMEhave been seriously listening to music for a lot longer than I have, and I figured they must know something I don’t. So I deleted their albums from my computer, deleted the photo of their show from my Instagram, and forgot about The 1975 for pretty much all of 2015.

In 2016, The 1975 came out with their second album, “I Like It When You Sleep, for You Are So Beautiful yet So Unaware of It.” Puzzlingly, critics now seemed to like The 1975, praising the album’s ambition and variation. I understood why critics liked “I Like It When You Sleep,” but I wanted to find out why, as a 17-year-old girl, I had liked The 1975 from the beginning, and if I’d been right all along.

The impersonal reason why I wanted to understand why The 1975’s teenage girl fans adored the band was that I thought it would help me understand the band better—after all, a reviewer’s job, beyond actual criticism, is understanding. And The 1975’s fans understand The 1975 deeply, as I once had: they read the interviews, listen to the records, and go to all the shows.

So I went to the House of Blues, watched the teenage girls, and eventually came up with an answer.

A black-and-white picture of Johnny Cash smoking a cigarette flashed on the projector at the House of Blues. “Johnny CAN,” the caption read. David Bowie and Jimmy Page, and their cigarettes, were featured next: “David CAN,” “Jimmy CAN.” Then, the conclusion of the advertisement: “You CAN’T. No smoking in the venue.”

Matty Healy, the lead singer of The 1975, lit up sometime during the third song, and the shrieks reverberated around the room. Healy can, too.

Healy makes smoking a cigarette look just as cool as Johnny, David, and Jimmy did—although, truth be told, he could make killing a puppy look cool. Another man wearing Healy’s three gold necklaces would’ve used them to enhance his masculinity—like, “I’m such a man I can make even these thin necklaces look manly”—and I get that image, but on Healy the necklaces look both hard and delicate. The overall effect is brash with a dash of vulnerability. Healy flops around on stage, sinking his knees so deeply it looks more like he’s collapsing than dancing (two notable exceptions were when he attempted to moonwalk and dab), but from those moves, you sense how in tune he is with his songs. This intimacy is also evident in the way he says “thank you” immediately after the song finishes, just before the audience processes the ending and starts clapping.

Before “Me,” from the “Music for Cars” EP, Healy started to talk. He requested that the audience put down their phones. “I want to connect,” he said desperately. “We’re in the same room for the same reason. Just us and you, and no phones.”

I don’t usually hold with the no-phones request—I paid for the ticket, so if I want to record, I will—but Healy’s reasons seemed different than the usual hokey “Live in the moment” or “You’re an image-obsessed millennial.” (And clearly he wasn’t anti-phones in general; at one point, he picked up an audience member’s phone and took a selfie with his back facing the crowd, so that his face was one of many.) Although on the surface “Me” seemed like an odd choice to inspire deeper audience connection—why not “You”?—it all eventually became clear. “Me” was Healy offering himself up to his audience; the no-phones request was an attempt to achieve the deepest level of connection possible. The whispered “I was thinking ‘bout killing myself” line was just barely audible over the swirling synths, but it was enough: a brave exposure, honored by open ears. 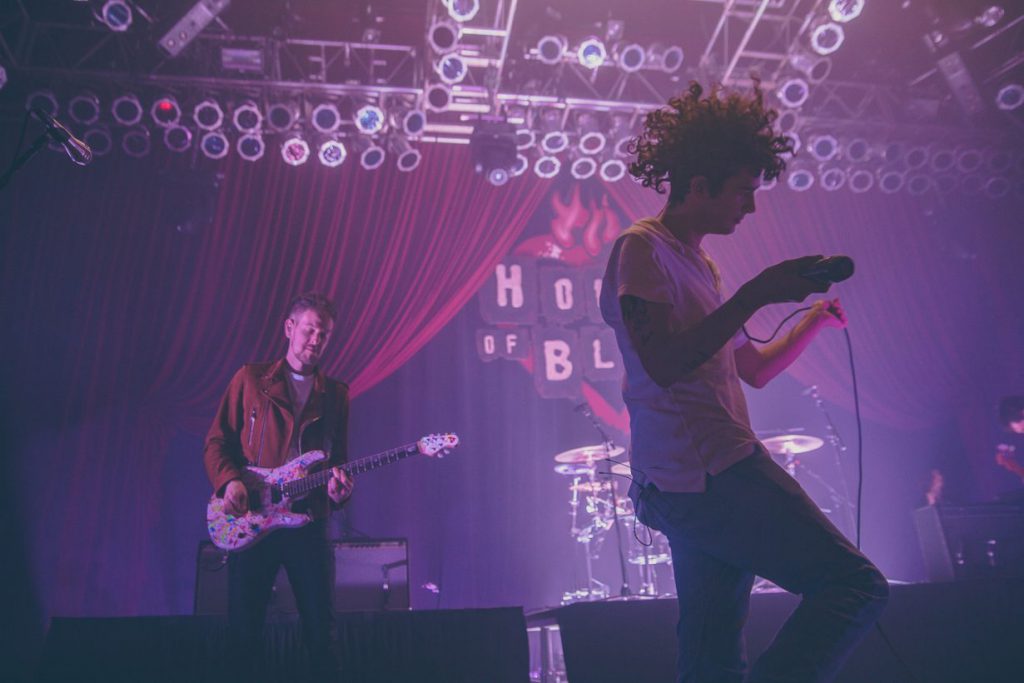 “Paris,” the second song before the encore, resonated similarly. The lyrics are Matty Healy at his most Matty Healy. Drugs? Check. Admission of his own weaknesses? Check. A girl, referred to as “she,” who is beautiful, flawed, drug-addicted, and perceptive? Check. British turns of phrase? Check. Healy grappling with fame? Check. Six-syllable word? Check. A meta-acknowledgment of criticism of The 1975? Check.

I read “Paris” as a take two of “Chocolate,” their 2014 single—a character study of a coked-up girl that reflects Healy’s own struggles with addiction. There was one lyric, though, that the crowd bellowed rather than sung: “I said, ‘Hey kids, we’re all just the same’/ What a shame.” The irony is that this dreary line—with its implication that no one can be unique—isn’t so bleak when 2,000 people scream it together. “We’re all just the same” became a joyful celebration of the connections among the audience members, and between the audience and Healy. The struggle seemed less bleak now that it was communal.

That same triumphal connection was especially present during the second-to-last song, “The Sound,” from “I Like It When You Sleep.” I remember how Chance the Rapper’s jubilation washed over me when I first listened to “All We Got”—he was so thrilled to be alive, to be successful, to work with Kanye, to be the dad of the best daughter and the partner of the best mother. That same wild happiness courses through “The Sound,” through some combination of the repeated two-line chorus, the gospel choir backing Healy’s voice, and the bright, pounding keyboard line. Like the “We’re just the same” line in “Paris,” the ample cynicism in “The Sound” was re-contextualized and given a more positive meaning live: “The sound of your heart” was something precious. Right before guitarist Adam Hann’s solo, Healy ordered the crowd to “do something dramatic” on the count of four. The audience obliged by jumping up and down with so much abandon that the venue floor felt like a trampoline.

And so my unifying theory is this: The 1975 achieves true connection with their teenage-girl fans by romanticizing the worst of the teenage experience. Even when Healy is singing about all the shit he’s gone through, he expresses his pain artfully through music and poetic language.

When you’re a teenage girl, your life is also full of shit. Your body changes, crushes screw with your emotions, you think about big-picture ideas—growing up, how to express yourself, the point of it all, God, dying, art, your place in the world, love—and you and everyone around you come up short of a satisfactory answer. If Healy can make being unable to get it up sound beautiful, your daily struggle to get someone to text you back, your teenage boredom, and your stained period panties can be beautiful too.

That ability to cast a glow over ordinary lives opens up teenage girls to The 1975, leading to something even more spectacular: genuine connection.

I don’t mean to reduce The 1975. On “I Like It When You Sleep,” particularly, Healy addresses a wide variety of subjects, and grapples with high-level philosophy by authors I haven’t read. My unifying theory of The 1975 is just an abstraction, and is probably worth little in reality.

If you’d asked any of the teenage girls at the show why they liked The 1975, you’d hear a wide variety of answers, probably none of them identical to my theory. Girls might tell you they liked the music, that it was inexorably catchy; this is true, as half the building walked out whistling the chorus from “The Sound.” Others would say they connected to the lyrics, or that they liked Healy’s philosophizing. (Has anyone else ever crammed the word “Epicurean” into a radio single before?) Some girls might even say that they liked The 1975’s aesthetic—the original black-and-white color scheme, Matty’s old all-black outfits, or the way Matty looks smoking a cigarette with his shirt open, chest tattoo visible for everyone to swoon over. Most would probably cite a combination of those reasons, although there’s no shame in any individual one, not even in being hopelessly attracted to Healy. (For example, I got into Blur because I kept seeing gorgeous pictures of bassist Alex James; I wanted to be able to put pictures of Alex up on my wall without feeling like a poser.)

Still, I think there’s truth in my unifying theory. Before the show started, I struck up a conversation from the photo pit with three friends in the front row. These girls weren’t the nicest—they were rude to the group next to them, who they thought they had taken up some of their hard-fought elbow room—but they were savvy.

“When did you guys start lining up for the show?” I asked.

“Five a.m.,” one of the girls said, her tone a mix of pride and defensiveness.

“Are you all from here?”

“No, I’m from Houston,” she replied, warming to my continuation of the conversation. “She”—the girl jabbed at the companion to her left—”is also from Houston, and she”—the girl to her right—“is from New Orleans.”