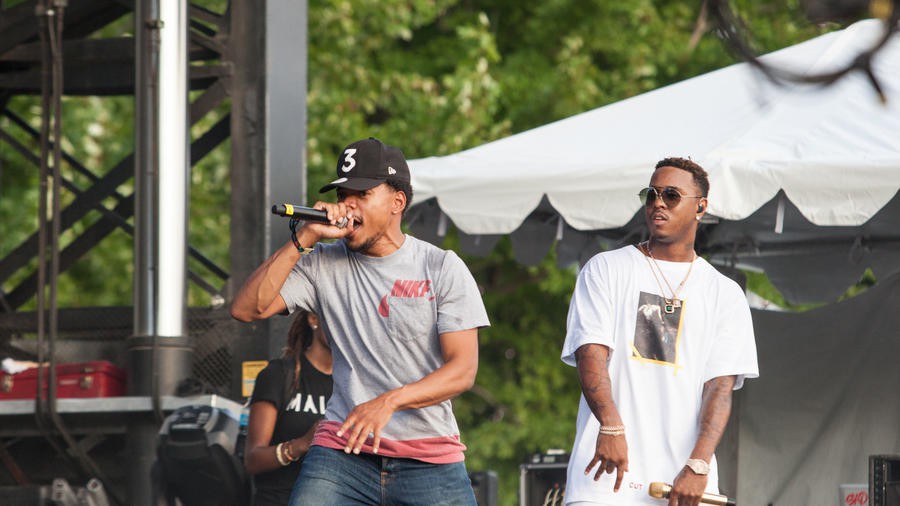 Chance the Rapper and Jeremih perform for a hometown crowd on July 17.

Brian Wilson Doing Pet Sounds Could’ve Been Horrible But Wasn’t, Although It Kind of Was

Brian Wilson can’t sing for shit, and neither can Al Jardine. The guy behind me was hitting more notes than Wilson was, and sometimes I got the feeling that Wilson was pulling the old orchestra trick for when you haven’t practiced: projecting so softly that you’re drowned out by everyone else. Wilson was also totally out of it—his face portrayed no emotion, and he wobbled off the stage without so much as a “thanks.” Yet Wilson’s band was resounding and unhurried, and Al Jardine’s son Mike was nothing short of heroic, flexing a ball-busting falsetto with ease.

I’m of the mildly controversial opinion that Pet Sounds, as influential as it is, is no match for an all-the-hits Beach Boys set. However, doing a Pet Sounds retrospective did make the whole thing more respectable. It was spun as a treat for intellectual Beach Boys fans who listen to albums, not singles, whereas a Greatest Hits set list would’ve been an exercise in nostalgia for drunk 60-somethings. Still, you absolutely cannot tell me that “Don’t Talk (Put Your Head on My Shoulder)” is more fun to hear live than “Fun Fun Fun,” because that’s a lie. The best of both worlds happened during the most popular tracks off Pet Sounds: “Wouldn’t It Be Nice,” “God Only Knows,” and “Sloop John B.”

After Wilson and his monstrously large band (which at one point included guest vocals from John Cusack) finished Pet Sounds, they did a short encore of The Hits. But by then all of the serious Pet Sounds fans had left, so even though I had a great singalong to “Barbara Ann,” it all seemed way more embarrassing now that I was completely surrounded by old people.

Who decided that the Pitchfork crowd was too ironic to hear “Kokomo”? I love “Kokomo.” Sue me.

Haven’t you heard? The saxophone’s back! (Although the devout will surely try to make a case for it never having left.) Carly Rae Jepsen had a saxophone player, who rang out the opening notes of “Run Away With Me”; Blood Orange had a saxophone player; and Twin Peaks brought out both an alto sax and a bari sax (and Whitney’s trumpet player).

Seriously, Twin Peaks—the crusading knights of down-and-dirty garage rock! the hurlers of joints into the crowd!—brought out two saxophone players. The end is nigh! Take cover! Repent!

I confessed to my boss the day after Pitchfork that I didn’t like Sufjan Stevens’s set. He asked me if it was because Stevens was too evangelical. I thought about it, and decided that wasn’t the problem; Chance the Rapper is a little evangelical, and his joyful proclamations of faith don’t bother me one bit.

Continuing that comparison, take Chance’s and Stevens’s different uses of Chicago. For Stevens, Chicago is some combination of a setting for his experiences and a metaphor for his feelings. Chance, on the other hand, uses Chicago generously—he wants to give back to Chicago. He wants to rep it.

The same felt true of their headlining sets. Chance’s set last year was like giving someone a great gift and wanting to watch them open it; the happier his audience got, the happier Chance became. On the other hand, Stevens’ insistence on goofiness and pageantry during this year’s festival felt self-indulgent, especially during the two interminable Age of Adz numbers “I Want to Be Well” and “Impossible Soul.” The last time I saw Stevens, I was irritated by the maximalist renditions of the vocals-and-acoustic-guitar songs from Carrie and Lowell. I minded them less this time around, since the huge stage and crowd absorbed the extra sound better than an indoor theater. On the track from Michigan, “For the Windows in Paradise, For the Fatherless in Ypsilanti,” it was just Stevens and his piano/guitar/banjo, which was a nice treat. Still, just about anything looks minimalist when stacked next to Stevens wearing a cape made out of streamers and brightly colored balloons.

On more than one occasion, I felt like Stevens’ set was an empty spectacle; I was less moved by his musical outpouring of grief when he was wearing seven-foot wings. Stevens’ worst sin was giggling about forgetting the lyrics to “Kiss,” his set-closing Prince cover featuring Moses Sumney. Fuck around with your material all you want, but it seems disrespectful to treat a recently-deceased artist’s work so lightly.

Did Pitchfork Book All of Dev Hynes’ Friends, or did Dev Hynes and His Friends Book Pitchfork?

Truly, this is one of the more enduring mysteries of our time. Dev Hynes (Blood Orange) popped up at Carly Rae Jepsen’s set to do the guitar line he wrote for “All That,” and Jepsen glided through Blood Orange’s transcendent Saturday set to perform “Better Than Me.” Hynes also brought out Sunday performer Empress Of to do “Best to You,” a track from the 2016 strong contender for Album of the Year, Freetown Sound. The overall effect of Blood Orange’s set was much like sitting on a beach at sunset—the sparkling guitar solos, soft harmonies, and Hynes’s shirtless, twirling body combined to produce an atmosphere of hazy content.

Savages blasted into my life on Saturday afternoon with particularly good timing. While walking home from Pitchfork the night before, I had been catcalled. Unfortunately, “Woman walking home alone at night gets catcalled” is not a unique headline, but this instance had felt particularly icky to me.

Savages’ set didn’t make me forget the vociferousness of the catcall. It did something better—it helped me fight against feeling helpless. Musically, Savages were the most powerful act of the weekend. Ayse Hassan muscling her bass guitar into submission combined with Fay Milton (savagely) battering her drum kit made for a particularly satisfying aural experience. Jehnny Beth, Savages’ lead singer, was graceful on stage, but not in a flowy way. Her movements were sharp, purposeful, and dramatic. She made a slow, mixing motion with her index finger, and the crowd understood her intentions instantly: The directive invigorated the two infantile mosh pits, and they became more intense.

“Don’t let the fuckers get you down,” Beth said, and later screamed. I was beyond grateful.

Because timing at the Blue Stage is always fucked up—the managers get an unrealistic 15 minutes to strike and build sets—I accidentally caught the end of the Range’s set while waiting for Shamir. The only track I heard in full was “1804,” and so I initially took the Range to be another white boy producer messing around with dancehall.

Fortunately, while Shamir set up, the organizers projected Superimpose, a documentary about the making of the Range’s 2016 album Potential, which corrected this impression. Most of the songs on Potential (including “1804”) sample YouTube clips, a result of the Range’s fascination with online artists’ willingness to make their music despite the slim chance of fame. Superimpose tracked down those YouTube artists, and the whole thing turned into a feel-good story about connectivity.

Pitchfork was a softball for Jeremih, because he’s from 109th and Loomis, and Chicago is his city. If you caught his set at Summer Breeze, the general structure of his Pitchfork set would’ve been familiar to you.

First, his DJ got the crowd hype by playing all the current bangers (this was noticeably more fun than hearing those songs on the radio, because you’re dancing with thousands of people and you know you’re less than 15 minutes away from hearing Jeremih’s sultry tones). Then Jeremih came out, and he asked the crowd if they wanted to hear old shit or new shit. It makes no difference, because it was either going to be “Birthday Sex” or “Pass Dat,” and both of those options are fantastic. Also, you knew he was going to do both eventually, and he did. (“Birthday Sex” gets the added sexy bonus of Jeremih singing sexily while sexily playing the keyboard.) “Planez,” another new-shit highlight, was atmospheric enough to make the crowd sway woozily. I suspect it to be Jeremih’s best song when J. Cole’s verse is absent from the track, which in this case it happily was.

During moments in the set when I worried Jeremih had run out of new shit, he revealed his impeccable taste in guests: he brought out his mother, whom he serenaded because it was Jeremih’s birthday and Jeremih is every mother’s dream child; G Herbo, who came out at the end to general bewilderment; and none other than Chicago Mayor Chance the Rapper, who curiously did “No Problem” and “Angels” but not “Summer Friends,” which actually features Jeremih.

I’m fairly certain I started sobbing as soon as I heard the swell of the chorus that begins “No Problem,” and I also recall myself and about a hundred other people making a mad dash for the front. As Meg from Hercules famously said, “People do crazy things when they’re in love with Chance the Rapper.”

*The header is a cruel joke that I shouldn’t have made. I love Jeremih dearly.