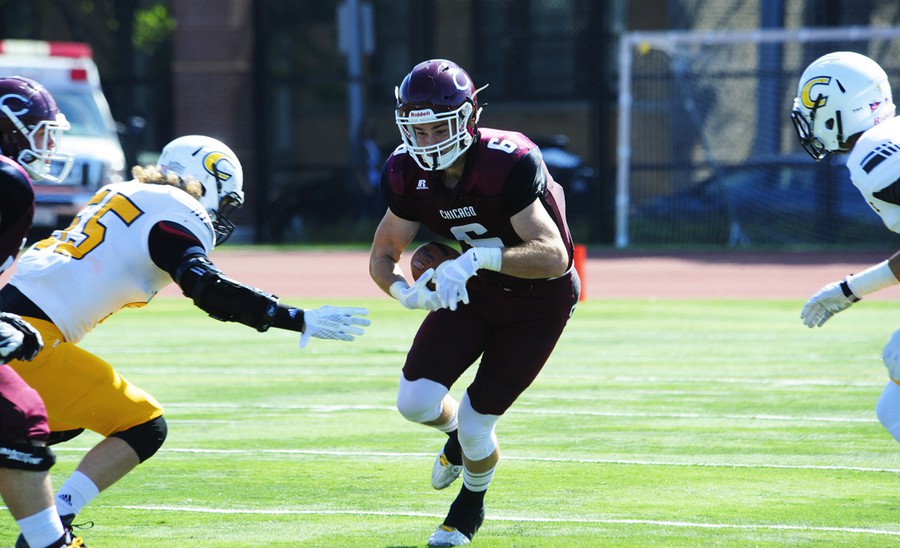 Chris Mason attempts to avoid the defenders as he carries the ball.

Last season marked the first year the Maroons moved out of the UAA conference and into the Southern Athletic Association (SAA). The South Siders are looking to improve on their previous 2015 season record of 6–4, and their previous standing as fourth in the SAA. This year, the Maroons welcomed back 71 returning players to the field: 17 fourth-years, 28 third-years, and 26 second-years. New to Stagg Field, 27 first-years joined the squad and quickly got into the swing of things. With a full roster of 98 players, Chicago is looking to boost past standings and get things done this season.

Preseason started for Chicago mid-August, as the Maroons arrived on campus a month prior to the arrival of their fellow students. For the next month and a half, the team was given the unique opportunity to keep its focus solely on the field, whereas its competitors had already started the academic year and would have to split their focuses between athletics and academics.

After preseason camp and weeks of training, September 3 came and Chicago set off for Cleveland, Ohio for its first game. Playing out of conference against previous UAA competitor, Case Western Reserve, the Maroons went in for the win, hopeful due to their narrow victory against Case in the 2015 season (31–30). Unfortunately, after a rocky start in the first quarter, the Chicago Maroons fell short in a 45–17 loss.

Starting the season 0–1 fueled the Maroons’ hunger as they went on the hunt for a conquest; and with two weeks until their next competition, the South Siders trained hard. When September 17 arrived, Chicago proved that it was ready for its competitor: SAA rivals, the Millsaps Majors of Jackson, Mississippi. A fierce match resulted in a victory for the Maroons, and although the Majors tried to keep pace, it was Chicago’s game from the start. Setting the tempo from the beginning, Chicago outscored the Majors 14–0 in the first quarter. Trying to regain ground, the Majors managed to match the Maroons with seven each in the second quarter. The third quarter proved less effective for Chicago, as the Majors outscored them thanks to two interceptions and an incompletion in the end zone. Fortunately for the Maroons, the Majors’ efforts were in vain. The Maroons came out victorious, 35–16 over the Majors.

Now with a record of 1–1 overall and 1–0 in their conference, the Maroons looked forward to their next SAA game, when they would travel just below the Mason-Dixon line to meet their opponents of Centre College in Kentucky. The Maroons fell 49–27 in a tough battle. Second-year safety Jeremy Vincent said in reference to this loss that the team “started slow and didn’t come out as fast as they wanted, and by the time things had started picking back up it was a little bit too late.”

In preparation for Saturday’s game, Vincent said, “As a team, as far as defense goes, we’ve focused on stopping the run and also being sound in the secondary.” Although anxious, Vincent is “ready and looking forward to playing at home again, and being able to bounce back from last week’s game.”Chicago’s first home game since the academic quarter started kicks-off at noon on Saturday at Stagg Field.