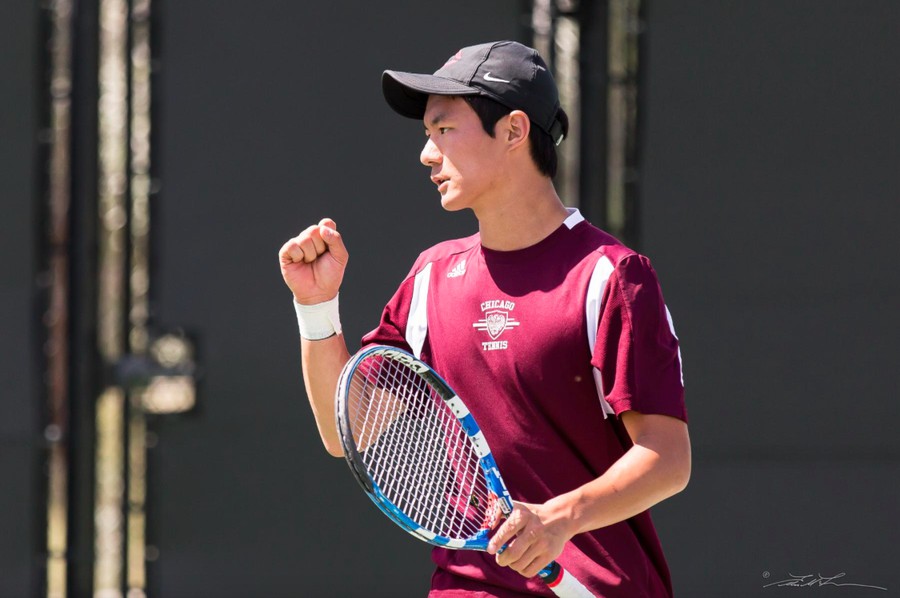 This past weekend, UChicago dominated the men’s portion of the Intercollegiate Tennis Association (ITA) Central Region Championships for the third straight year, bringing both the singles and doubles titles back to Hyde Park. Third-year David Liu won in singles while fourth-year Max Hawkins teamed up with first-year Tyler Raclin in their first official matches together to win the doubles side. All three athletes were named UAA Athletes of the Week. In a field of 128 players, Liu was the eighth seed and had to take down some of his own teammates on the way to the title.

Liu said this is not the first time something like this has happened. “The final last year was also an all-UChicago match, and there were plenty on the way to the final this year. The way I see it is that while it isn't ideal that we have to compete against each other, it's certainly better than losing to other schools,” he said. “Peter played great throughout the tournament and it was a hard-fought final, and I just happened to come out on top on that given day. Maybe if we played it a day later, or if the weather was a little different, the result could have been different.”

For the fourth-year Hawkins, teaming up with a first-year was a pleasant surprise as the duo went from unseeded to doubles champions. “Playing with Tyler was awesome. He doesn’t really seem like a freshman. He's a great doubles player who was really easy to play with because of his personality, intellect, and ability,” he said. Commenting on his surprise, Hawkins said, “I still
can't believe we won the tournament. I didn't think I was even going to play in it a few weeks before, so it really hasn't sunk in. I have to give a lot of credit to [coaches] Jay and Kris, and my teammates for putting Tyler and I in a position to do well.”

The women’s side hopes to follow the men’s lead in its ITA Central Region Championships this upcoming weekend. In their only outing of the season so far, the Maroon women dominated Carthage in a 9–0 sweep.

Second-year Kaela Bynoe pointed out that it was not just the score of the matches against Carthage, but the team’s approach that stuck out. “I think the team is feeling really good about the win over Carthage. Not only did we dominate with the score, we had a really great attitude and great energy that I think helped us play better despite the fact that we hadn't played much
over the past ten days,” she said.

Hopefully that trend continues to Kalamazoo, MI, this weekend as the Maroons look to complete the sweep of the ITA Central Region Championships. “We've learned not to ‘expect’ to win anything, but we feel confident that we can do really well at ITAs. The boys just had all UChicago singles and doubles finals at ITAs, so we are definitely going to try to match them,” added Bynoe.

Both the women and men believe their respective early season success bodes well for the season to come, but the two sides emphasize the amount of work they have left to do.

“With our team this year, I think we have the firepower to compete with anyone on all fronts and we will be a strong force to be reckoned with,” stated Liu. “We have one goal this year, which is to win the University's first-ever NCAA title, and after our last two Final Four finishes, I know it's possible.”

“We know what we need to improve, and we look forward to getting everyone’s best shot since we’ll be one of the favorites going into this year,” added Hawkins.

“We have a big team, but everyone who’s on the team wants to be here and is willing to push each other and sacrifice for each other which wasn’t true my first year.”“We had a pretty successful season last year; we made it to the quarterfinals of NCAA. So our goal this year is to top that,” said Bynoe. “We've got four very good new players on the team, so I think it's very possible.”