Women's Soccer off to Historic Start 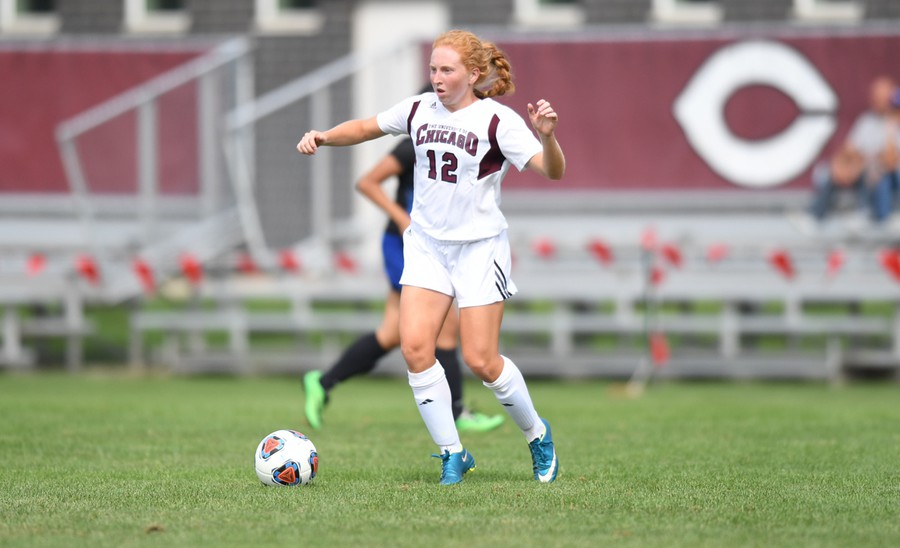 Jenna McKinney makes her mark as she races up the field with the ball in the midst of opposing defenders.

Chicago’s slew of victories has come over Calvin, Aurora, Kalamazoo, Illinois Wesleyan, Milwaukee School of Engineering, North Central, Wheaton, Augustana, and Carthage. Even more impressive, the Maroons started their season with four straight shutouts, their longest streak since 2010, when they had tallied six in a row.

Not only are the South Siders winning, but they are dominating by significant margins. The single game in which they won by less than a two-point margin was against Kalamazoo, which the Maroons still won 1–0.

Perhaps the greatest demonstration of the squad’s defensive prowess was shown against No. 20 Augustana on September 24. The Maroons dominated every relevant statistic, not only taking 15 shots on goal but also only allowing two on their end. Corner kick attempts were also lopsided 8–0 in favor of the South Siders.

Their most recent game against Carthage on Wednesday night proved to be one of their most challenging thus far, as the Lady Reds fired 11 shots, eight of which were on goal. This marked the first time all season that UChicago allowed double digit shot attempts. Fortunately, however, the South Siders were able to pull off a 2–0 victory, with goals by second-year defender Sydney Mathis and third-year midfielder Mia Calamari.

Contributing greatly to the team’s early success has been the arrival of 11 talented first-years, many of whom have made an immediate impact on the field. For instance, first-year goalkeeper Katie Donovan, from Connecticut, has already tallied five impressive shutouts, and as a result was named UAA Athlete of the Week in mid-September.

Third-year Caroline Olivero, who recently returned to the field after suffering an ACL tear last year, attributes early success to the team’s ease on the field. “We are playing much more fluid, creative soccer,” she said. “I think that environment is allowing all of the talent that we have to really shine through. We also have a really deep team this year, which is exciting.”

The start of October also marks the start of conference play for the Maroons, which means more competition and higher intensity matchups with more time spent on the road. This weekend, the South Siders will travel to Atlanta, GA, to face off against Emory. The Eagles now sit at a 5–3 record, but most recently defeated No. 23 Centre College, proving that they are not a team to be taken lightly.

Further, at this time last year, Chicago was also squaring off against the Eagles and managed to escape with a 1–0 win. Emory was ranked 24th in the nation at the time; however, the 2015 Maroons were heading into the game at 7–4, a far cry from their perfect record this year.

On moving into conference play, Olivero said, “We will need to focus on maintaining composure and sticking to our plan in the face of better and better teams. We'll have to be very disciplined in that regard.”

If the first month of the season is any indication for the rest of the season, the Maroons have the ability to do just that.