Chicagoans Say Goodbye to Their President 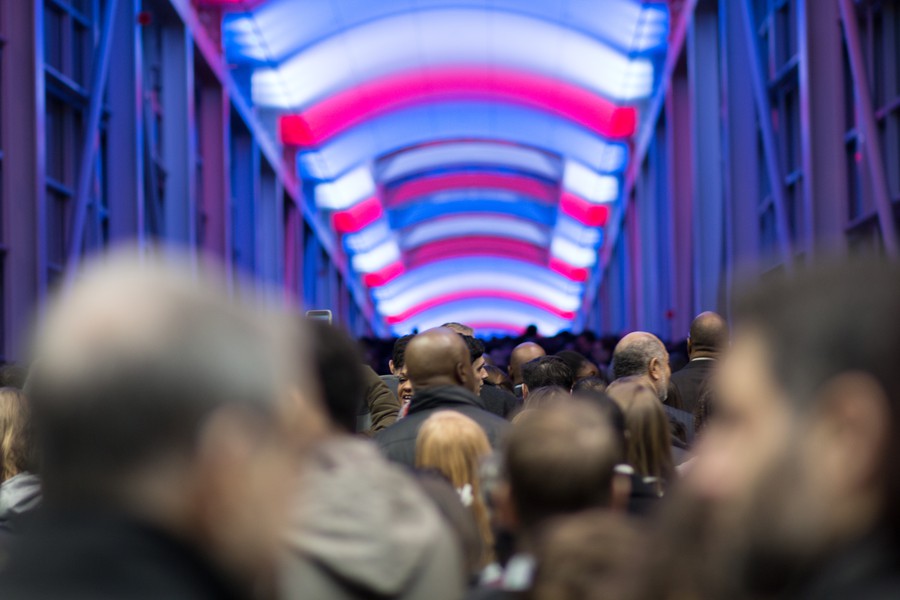 The massive crowd files out of the venue.

Richard Brown, like many Chicagoans, came full circle last night. As he stood in line for the President’s farewell speech at McCormick Place, he compared the atmosphere to the iconic night in Grant Park in 2008, where he stood and watched Barack Obama give his victory speech. “The energy that night was so electric, so happy, so energizing,” he recalled. “And here we are, eight years later, still impressed by the man.”

Brown, like many of the 18,000 guests who attended Tuesday’s speech, arrived before 6 a.m. on Saturday morning to stand in an hours-long line for tickets outside McCormick Place in the three-degree weather. “First my toes went numb, then the middle of my foot went numb, then my entire foot went numb, but after I was there for two hours I figured I just can’t leave,” Brown said.

It was worth it though, said Brown, who grew up in Chatham and Bronzeville, because of the President’s connections to the city. “I’m a South Sider…and sometimes people give the South Side a bad rap…so it gives me a sense of pride to say that the leader of the free world is from the South Side.”

Brown attended the speech with his sister and some of his fraternity brothers from college. Calae Perry, who came with Brown, observed that the the mood in the room had changed since Grant Park in 2008.

“We know that there’s going to be something that will end that we love now, so it’s bittersweet; it’s somber. It’s a lot of spiritual reminiscing,” he said.

Both Brown and Perry emphasized their appreciation for Obama’s work and legacy. The President’s My Brother’s Keeper initiative, which provides mentorship to young men of color, is particularly important to Brown, who runs a nonprofit for young men on the South Side.

“He’s a quintessential model of what you can be if you work hard,” Brown said. “Right here from our neighborhood, right here from our town, and he’s a really good example for the people I work with of how anything’s possible.”

Perry stated that Obama’s presidency has been “by no means perfect,” and that he wished the President had worked more on criminal justice reform, but that he is “happy on him for Cuba, for civil rights, for trying to make the economy better for everybody.”

Others in line expressed greater dissatisfaction with Obama’s record. Marilu Vazquez explained that while she liked Obama during his first term, she has been disappointed by his second. She stood in line for tickets with her daughter on Saturday because she wanted to hear the President speak about what he has done for the country.

Melissa Torres, her 17-year-old daughter, agreed. “I guess I was a little bit disappointed about immigration reform and now that Trump is going to be president it’s a little bit more worrying because I think there will be more deportations and more disappointments,” she said.

Another Chicago high school student in line, Graeme Phillips, discussed the iconic role he believes Obama has played over the course of his presidency.

“People love this guy,” Phillips said. “You know how the Democrats are always looking for the next Jack Kennedy and Republicans are looking for Ronald Reagan? I feel like Obama’s the closest thing to Jack Kennedy.” Four hours away from the start of the President’s remarks, Phillips added, “This is his last speech; it’s gonna be emotional; it’s gonna be something. I think his goal is to inflict hope and really set up a platform for a brighter future.”

Obama delivered his farewell address on January 10 in McCormick Place, to a crowd of 20,000, including some University of Chicago students who were able to obtain tickets.