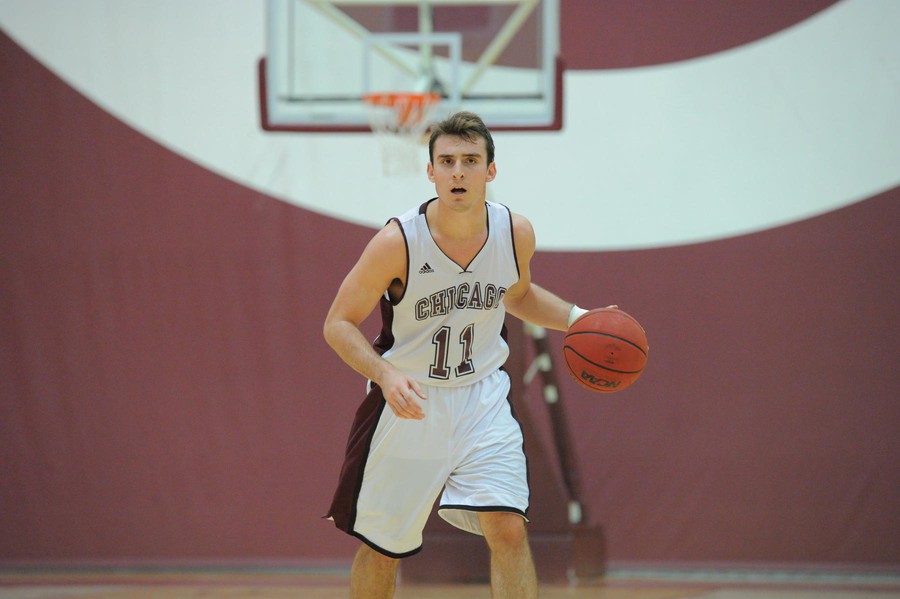 Fourth-year guard Tyler Howard looks to start a drive on the basket.

This weekend, the men’s basketball team will look for its first UAA wins of the young season as it heads out east to play No. 3 University of Rochester (12–0, 1–0 UAA) and Emory University (9–3, 0–1 UAA).

The Maroons (8–4, 0–1 UAA) have had a solid start to the season with all of the losses coming at the hand of nationally ranked teams. That being said, the South Siders will have another chance to knock off a ranked opponent this weekend after the heartbreaking 70–68 loss to Wash U.

As conference play kicks into high gear, fourth-year Alex Gustafson remarked on the challenges that brings. “Going on the road against two of the top teams in our conference is going to be tough, but I think we're hungry for two bounce-back wins,” said Gustafson. Conference road games are always testing and challenging as they necessitate a lot of travel and match-ups against tough teams. The key to getting through the conference schedule is to protect your home court and snag a few wins on the road. The Maroons are ready to compete this weekend and make things interesting atop the UAA standings.

Friday night’s game poses a tough matchup, pitting the Maroons against the No. 3 team in the country, Rochester. The undefeated Yellow Jackets are currently projected to win the UAA. Both Chicago and Rochester have boasted phenomenal offensive statistics thus far and enter the match with similar offensive efficiencies (1.18 points per possession vs 1.11 respectively). Chicago and Rochester also top the conference in points per game with 83.7 and 79.4 respectively.

Beating Rochester would be a big win for the Maroons, as it would set them up in a good place for the UAA conference season and also give them a win over a ranked team on their résumé.

While Rochester is the big name for the weekend, Emory is a force to be reckoned with on its own merit as well. Emory is always a competitive team, having appeared in the NCAA Tournament for the past three years. Emory is right up there with points per game at 79.3, posing the question this weekend of whose defense can force stops.

The Maroons are ready to get back to their winning form, having lost three tough games in a row. The squad has been hard at work this week, prepping for the first doubleheader weekend.  “We dropped an unfortunate one last weekend, but we've had a great week of practice with a lot of pace and energy and are hoping to get off to a hot start against both teams this weekend,” said Gustafson.

This weekend will be a good indicator of where the Maroons stack up in terms of UAA competition as after this weekend they’ll have faced up against three of the top teams.

Tip-off for Friday’s matchup at Rochester is set for 7 p.m., while Sunday’s game will begin at 11 p.m. at Emory University.