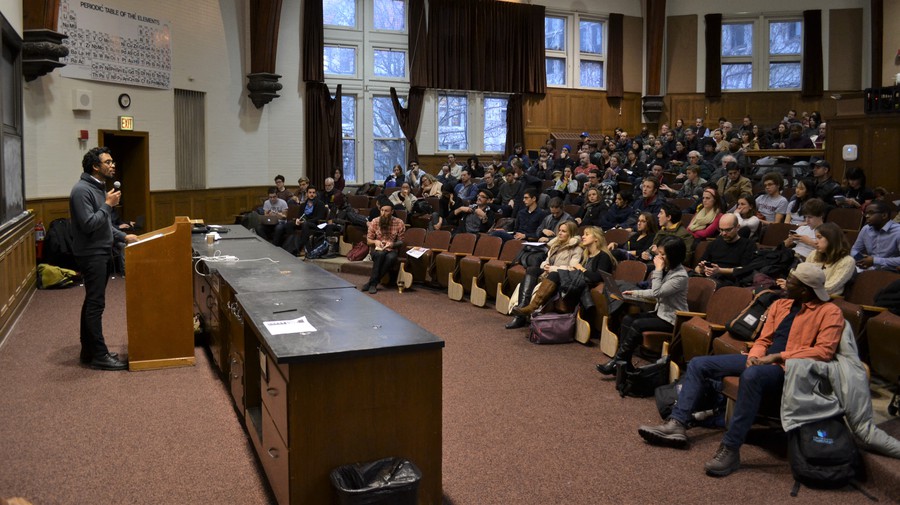 On Friday, January 13, a UChicago coalition of concerned students, faculty, and staff in the dawning age of Trump made a call for an Inauguration Day protest here at the University of Chicago. Collectively known as U of C Resists, the new coalition hosted its first meeting at Kent 107, officially titled “Resisting Trump: Where Do We Go From Here?”

“This is a matter of life and death,” third-year Steph Ban said to a fully packed Kent lecture hall. Seconds later, the auditorium-sized room erupted into an applause for Ban.

Ban was speaking on behalf of the Organization for Students with Disabilities (OSD), one of 11 University and local organizations that lent their voices to the event of the evening.

U of C Resists describes itself as a “coalition of UChicago students, staff, and faculty organizing to resist Trump’s agenda and the bigotry that his election has emboldened.” Days before the 13th, posters for the event had been distributed across campus.

The event was scheduled to begin at 4 p.m. on Friday. By 4:20 p.m., the lecture auditorium, which holds 286, was full besides few scattered seats in the front. Anton Ford, an assistant professor in philosophy, moderated the event. He said that the meeting serves as a gathering for those who are alarmed by a future under Trump and believe it to be necessary to fight back.

“How are we likely affected and what can we do about it?” Ford asked the audience.

The meeting consisted of two segments. The first half featured short speeches from representatives of University and local organizations. The second half was open to floor discussion.

Some representatives made speeches citing their own fears and fears of loved ones. Others suggested resistance initiatives forward, like walkouts, protests, or simple participation in chapter meetings.

Alex Shams, who is pursuing a Ph.D. in anthropology and is affiliated with Students for Justice in Palestine, took his time to make another point. He reminded the audience that long before Trump rose to the highest office of the land, anti-Semitism existed, far-right ideologies existed, so did the many other sentiments now breeding fear among many in attendance. Alex cited ongoing attacks he and his fellow members had endured from local far-right groups, which he said included blacklists aimed at damaging their future employment prospects. “This is not new,” Alex said. The way forward must take that into perspective.

Toward the end of the evening, a first-year student in the College stood up to speak during the open floor discussion. Taking a slightly different angle from previous comments, she spoke about the particular need for unity at this moment and the danger of a “us versus them” mentality.

After the event, Ford, who noted that he couldn't speak on behalf of U of C Resists, commented as a participant that he felt the energy and the turnout to be amazing. “There were people who wanted to come here from disparate kinds of activism, to work together going forward, [and] I think that was [precisely] the purpose of the meeting,” Ford said.