I’m not sold on whether the “quick and dirty” format of food prep works in a Mediterranean restaurant.

Last night, Roti Modern Mediterranean opened its doors next to the Chipotle on 53rd Street. Roti definitely fits the bill as a Chipotle impersonator, which makes its proximity to the real deal ironic. However, I respect Hotelling’s Law and could therefore overlook the tempting Chipotle smell to venture inside Roti for lunch on Wednesday.

I was first greeted with an abundance of trendy restaurant flair, including stainless steel, painted brick, and artistic rope structures as the Red Hot Chili Peppers played softly in the background. The huge signs that adorn the entryway read “Gluten Free,” “Organic,” “Antibiotic Free,” and “Free-Range.” And let me tell you, there aren’t many places left where you can get some decent free-range hummus.

These restaurateurs certainly know their audience—and their buzzwords—but I found it most surprising that the food actually seemed healthy. The meats and sauces in the assembly line seemed dwarfed by the sheer amount of vegetables throughout, which explains how few calories are in each of their dishes: 200 to 300 in each main course. This customizable health food comes at a price, of course. But for health food of the non-wrap/burrito variety, Roti might be the perfect counterweight to Chipotle.

I first ordered the pita wrap, filled with steak, feta, tomatoes, cucumbers, hummus, garlic sauce, and roasted red pepper sauce; and the basmati and wild rice bowl, with spicy lamb meatballs, couscous, olives, tomatoes, cucumbers, feta, hummus, quinoa cauliflower tabbouleh, and both red and green types of s’hug. I had no idea what the s’hug was, and the worker making my food didn’t either (it turned out to be a sauce). I also added on a cup of their red lentil soup and a piece of heavenly baklava. 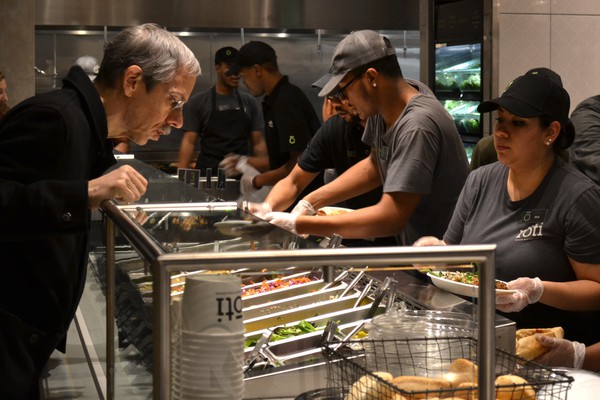 Patrons in line customizing their meal.

The cafeteria setup of the restaurant means that the food is prepared as you order it, but also requires you to bus your own table afterwards. The ingredients were served on different quadrants of the plate, but I didn’t mix my ingredients. Nonetheless, I enjoyed the process of getting the ideal “Mediterranean” bite in each forkful.

The rice bowl was, as a whole, delicious. The olives were packed with flavor and were sprinkled temptingly around the soft rice in the center. The rice itself was chewy and lemon-tinged, which broke up the veggie monotony. I warn anyone trying the tender spicy lamb meatballs that they are really quite spicy, much more so than expected.

And the hummus! The hummus was the star of the show: a salty, smooth texture with the intermingling of spice and oil. The quinoa cauliflower tabbouleh—the strangest ingredient—was actually pretty good, and tasted like a familiar deli coleslaw. The red s’hug was curry-like and savory, while the green s’hug had a strong cilantro-meets-pesto kind of flavor. Despite heavy spicing, the couscous was somehow flavorless, so I avoided it throughout the meal.

The red lentil soup was great—just eat it quickly, since its flavor is captured by the heat. It was much more like a curry sauce than a lentil soup, featuring a floating layer of cilantro and sticky vegetable fibers on top. 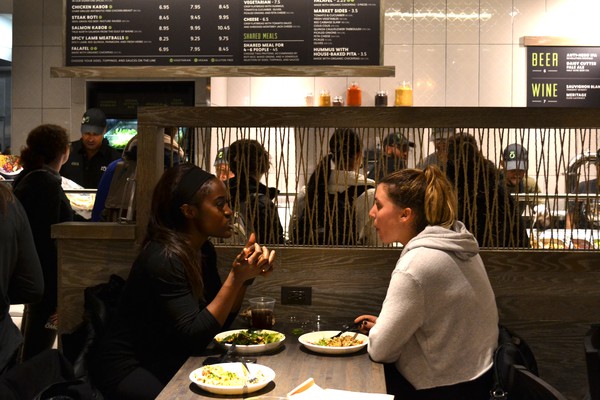 Patrons in line customizing their meal.

If I learned anything about food from Roti Modern Mediterranean, it’s that a pita wrap is a terrible invention, and that they should quickly revert back to tortillas before anyone gets hurt. It took me five bites to breach its dense shell, and the filling wasn’t even worth ripping through layer after layer of unyielding pita. The sauces formed a separate cavity in the hull of the pita, far away from the meat and huge lump of feta cheese. Although the meat and vegetables were certainly flavorful on their own, the meat was cold and barely covered in garlic sauce. At Chipotle, I avoid the bowl and always prefer the burrito, but I highly recommend doing the opposite when eating at Roti.

I enjoyed the quick and easy flavors at my disposal on the assembly line, but I would have preferred more individual care to ensure that the flavors end up in the right places. It was disappointing that by the time I sat down, the meat in my wrap had already gone cold, and I would imagine that the average Hyde Park citizen would also need to ask what s’hug is. I’m not sold on whether the “quick and dirty” format of food prep works in a Mediterranean restaurant, though I appreciated Roti’s showing, especially in the variety of ingredients available to the customizing customer.