Court’s "Blues" Provides a Window Into a Renaissance 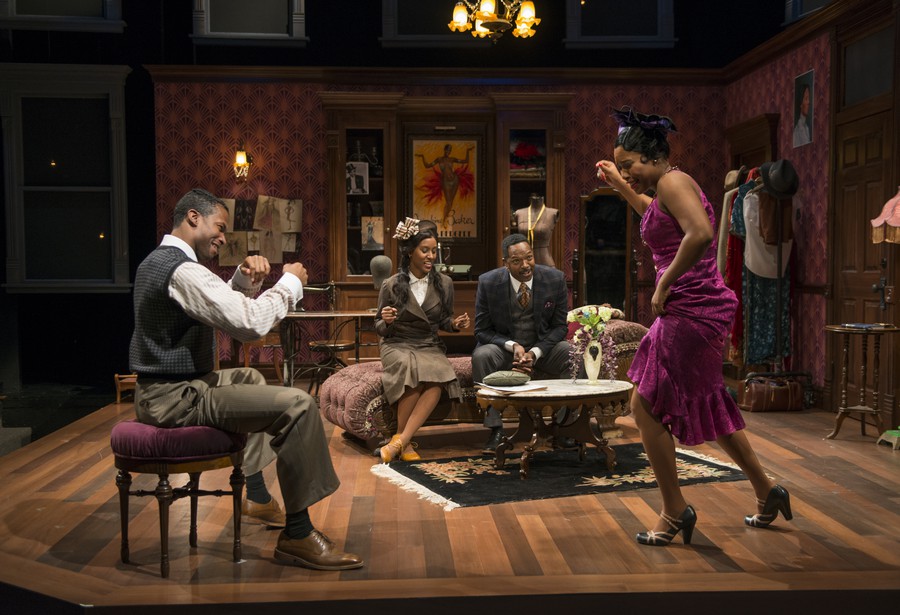 (From left to right) Parris, Cooper, Meredith, and Turner as Guy, Delia, Sam, and Angel enjoy a spontaneous blues dance.

Court Theatre opens 2017 with Blues for an Alabama Sky, a tribute to the Harlem Renaissance that unfolds all of the hope, humor, and heartache of the period. Pearl Cleage’s stunning and quick-witted script follows the lives of Angel (Toya Turner), an aspiring singer who dreams of her name in lights, and Guy (Sean Parris), a talented costumer for Harlem nightclubs whose goal is to design for Josephine Baker’s acts in Paris. The two live, lavishly and loudly, in an apartment beside their far more serious-minded friend Delia (Celeste M. Cooper), who works tirelessly with real-life birth control activist Margaret Sanger in hopes of establishing a family planning clinic for the women of Harlem.

The set of Blues is brimming with color and detail. From the first moment the actors enter, we see how well the stage complements them; it appears lived-in, with half-sewn garments, bottles of liquor, and an enormous poster of a grinning Josephine Baker in feathers (and not much else), an omnipresent manifestation of Guy’s deepest wish.

Next door is Delia’s more subtle, cool-toned room with a tidy bookcase and simple vanity. Both rooms become centers of lively companionship and astonishingly intimate moments of isolation. Audience members feel privileged to be able to look in on these moments, all of which seem rich and real. 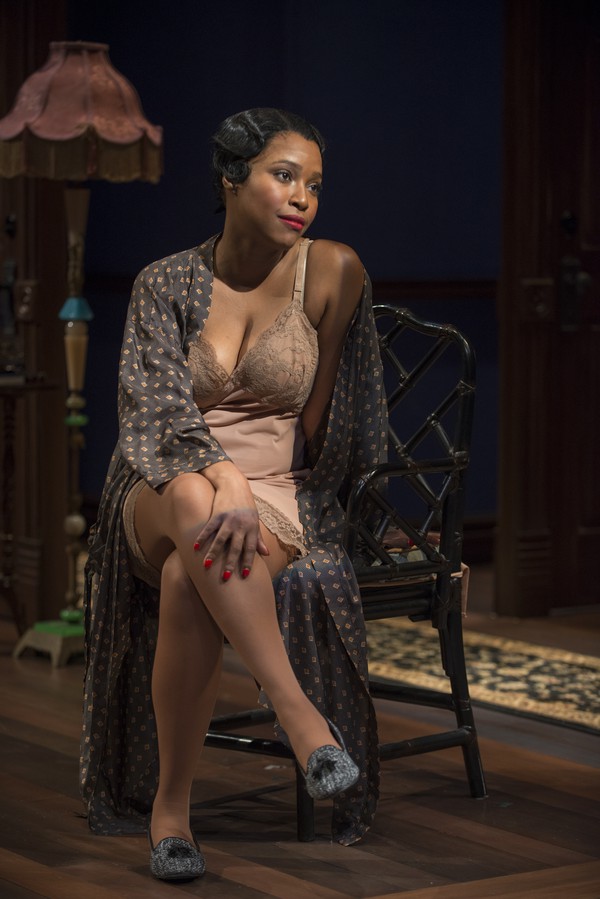 Angel (Toya Turner) contemplates her prospects after much hardship.

Turner is dynamic and captivating as Angel, the play’s central character. She sings and shimmies her complicated persona into every heart as she gazes out her apartment window. After a bout of bad luck, she pushes on, struggling to make it as an artist in a city wracked by the Great Depression. In the moments between running about in high-arched heels and slinky gowns in search of auditions, she settles in for some bootlegged alcohol with Sam (James Vincent Meredith), a friend and local doctor. Sam, a kind but distant soul approaching middle age, appears between long hospital shifts delivering babies to Harlem mothers who often can barely afford to sustain themselves. The cast possesses a well-practiced familiarity that emerges in their ear-filling banter and long-drawn moments of tension. In this midst of this, a stranger named Leeland (Geno Walker) from Alabama enters their lives and may turn their urban perspective around—for better or for worse.

As much as Blues evokes hearty laughs, it also confronts elements of identity in a meaningful manner from beginning to end. An homage to the inherent tragedy of an artist flourishing in the midst of a depression, Blues conveys a sense of yearning under the weight of pressing abstracts—from racism to gender expression to bodily autonomy—as well as the very physical effects of poverty. Though set in the past, this show’s themes are essential, especially today. This isn’t one to miss.

"Electra"fying Performance at the Court Theatre

Court Theatre’s "Electra" is stunning, thought-provoking, and accessible even to those not well-versed in Greek tragedy.