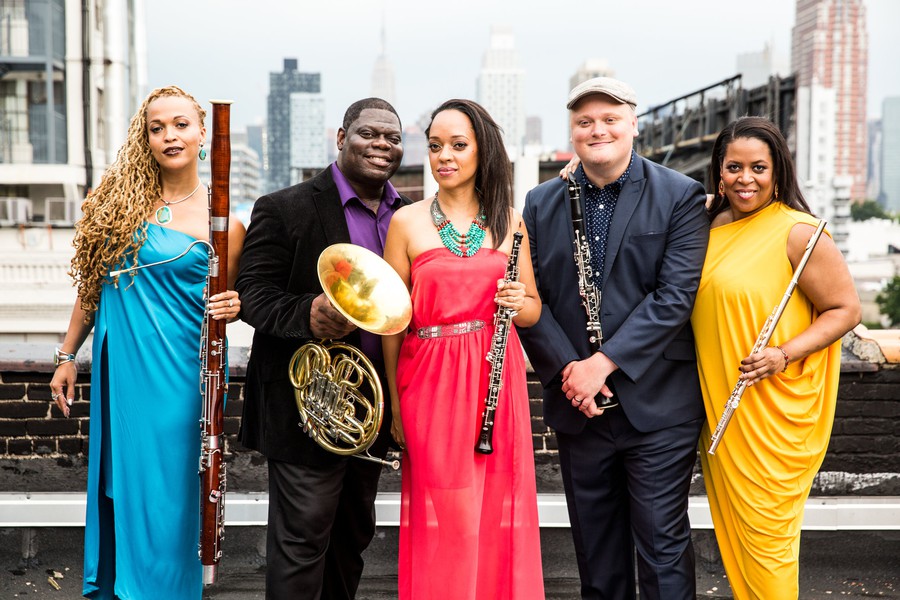 When Valerie Coleman was studying flute performance at Mannes School of Music in 1997, she came up with the idea for the name of her wind quintet: Imani Winds. With that in mind, she asked friends for names of quality New York musicians of color in the freelancing scene and came across bassoonist Monica Ellis, French horn player Jeff Scott, oboist Toyin Spellman-Diaz, and clarinetist Mariam Adam. Swahili for “faith,” imani became the new quintet’s namesake.

Today, nearly two decades later and with four of the five original members still in the ensemble, Imani Winds has gone on to receive a Grammy nomination for Best Classical Crossover Album (2016). Last year, Mark Dover came on board as Imani’s clarinetist. Throughout its career, the group has been devoted to promoting diversity in classical music, and it works hard to reach as diverse an audience as possible through various outreach efforts and collaborations with other performers and composers. At the end of last academic year, UChicago named Imani Winds the new Don Michael Randel ensemble in residence on campus, succeeding the Pacifica Quartet.

On Friday, the Imanis teamed up with the University of Chicago Chamber Music Organization (CMO) to partake in the third of a series of CMO-hosted panel discussions on race, class, and privilege in classical music in the Logan Penthouse. The discussion was moderated by fourth-year Shirley Zhang.

The discussion quickly turned to the Imanis’ dedication to performing diverse music by composers of varying backgrounds. As Scott explained, wind quintets “don’t have the Mozarts, the Brahms, the Strausses, and so on. So we don’t have great literature, the great composers of the 18th and 19th centuries.”

Scott—who, along with Coleman, is a composer himself—discussed that this distinct lack of repertoire is what placed Imani Winds and other wind quintets in a unique position to influence the birth of an entirely new canon of repertoire.

“You just can’t survive without repertoire,” he continued. “So you celebrate the idea that you’re starting with a blank palette.”

From this blank palette, Imani Winds created its Legacy Commissioning Project. Through Legacy, Imani commissioned 10 composers of color for a variety of concerts, as well as recordings.

“We knew right away that it was important to commission music from underrepresented folk,” Scott said. “It’s hard enough to get your music premiered no matter who you are, but definitely if you’re African-American, or Latino, or Asian; if you’re not from the standard European canon, it’s hard to get music performed. We have a platform that we stand on, and we decided to put our money where our mouths were.”

Ultimately the musicians stressed that performing diverse genres is integral to promoting inclusivity in classical music, and integral to Imani on the whole.

“As artists, it’s our responsibility to be true to ourselves,” Coleman said.

The group recalled a night when they performed one of Scott’s original pieces, a work that combined the music of Bach with John Coltrane. The concert included Imani Winds, a string quartet, and a jazz combo. In the Imani spirit of defying traditional musical boundaries, the performance attracted a wide array of classical music lovers and jazz enthusiasts alike.

The ensemble also discussed the other ways in which they “put their money where their mouth is.” Outreach is key for Imani—half of the group's touring schedule involves working with students, going to schools and churches, and reaching out to people who may not have otherwise had exposure to the ensemble.

In many ways, Imani Winds has been a trailblazer for the chamber and classical music worlds, and at Friday’s discussion they encouraged and challenged audience members not to be afraid to do the same.

“If you’re not seeing what you want to see in classical music on the stage or writing the music, be that person,” Scott said. “Find those other people with the same minds and push the boundaries. We knew that there were not many African-American chamber music concert ensembles touring in the United States, so this was not by accident that we put this group together. We didn’t know if it was going to be successful, but that was part of the mission.”

Friday’s discussion ended by turning outwards, well beyond the confines of Logan Penthouse.

“We are proud to be a mostly African-American—and Mark—ensemble, but I think these questions of diversity should not just be asked of people of color, they need to be asked of everyone,” Spellman-Diaz concluded. “We feel it’s all of our challenge.”