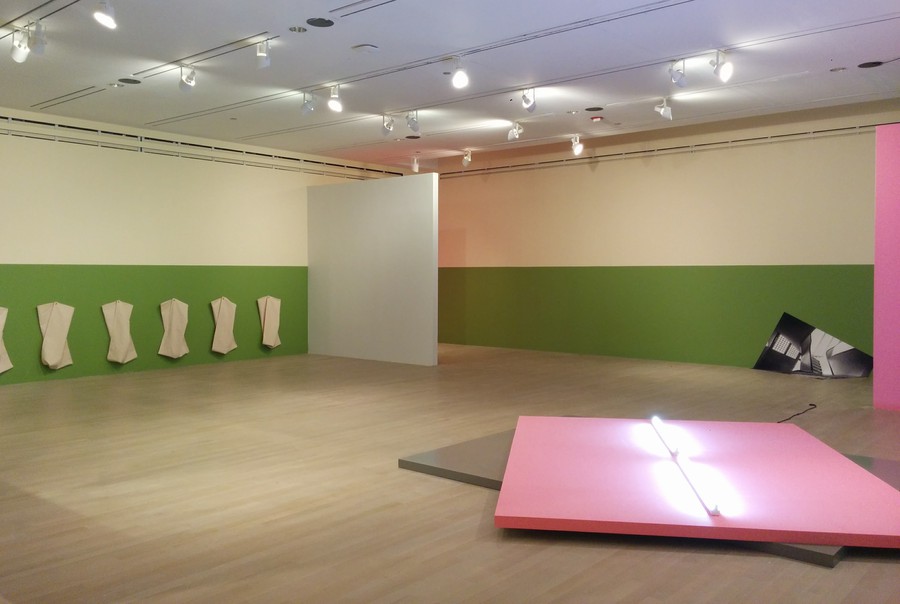 Courtesy of May Huang

Bright colors on two-toned walls fill the Logan Center Gallery, which currently features Canadian artist Kapwani Kiwanga’s first solo exhibition in the U.S., Kapwani Kiwanga: The sum and its parts. The show is curated by Logan’s Yesomi Umolu and supported by a number of organizations in France, where Kiwanga is now based.

Kiwanga graduated from McGill University with degrees in anthropology and comparative religions, but soon realized that academia was not her calling. Instead she turned to art and eventually pursued postgraduate work in the field.

Nonetheless, her research background factors heavily into her work, which explores how institutions such as schools, prisons, and hospitals affect physical and physiological behavior. What might at first glance seem to be only arbitrary colors on the walls in fact capture design elements rooted in the history of institutional control.

“All those parts come to a sum, which is the sum of an interest in architecture and design and how it relates to our control of our bodies,” Kiwanga said.

Kiwanga describes the exhibition space as “two-toned” because she juxtaposes pairs of colors throughout the gallery in various combinations: blue/white and gray/yellow feature prominently on the patchwork at the exhibition entrance, while the bare gallery walls are painted creamy white on top of green.

“[I wanted to investigate] the use of color and its effects on one’s bodily physiology,” Kiwanga said.

Some of Kiwanga’s color combinations reflect those used by institutions that adopted the “dado-wall treatment” to influence the behavior of the people they monitored. Kiwanga investigated such places as the Weyburn Mental Hospital in Saskatchewan, Canada, which was considered a pioneer for drug use in psychiatric treatments, as well as European reformatory schools from the late 19th century.

A vast amount of research went into the exhibition. Kiwanga trawled through the sea of archives in Special Collections to study the work of color theorist Faber Birren, who was a student at the University during the 1920s and later consulted for industries on incorporating color into the workplace.

For Kiwanga, a deceptively simple color speaks volumes. From a speaker in the gallery, Kiwanga’s voice explains the significance of the colors she has chosen to exhibit. One color in particular, “Baker Miller Pink,” is the same pink that was used in a Seattle Washington Naval correction facility during the 1970s. Its advocates claimed the color lowered inmates’ heart rates and induced a tranquilizing effect to counter aggressive behavior. The charcoal color on the patchwork at the entrance recalls prisons: guards would put charcoal on the walls to keep inmates standing erect, as the pigment would rub off on their skin otherwise. The green that dominates much of the gallery evokes healing and care. At the same time, eight pieces of fabric pinned to the walls represent the hammocks used in the Mettray Penal Colony in France—another symbol of institutional control. Kiwanga is deliberate even down to the layout: The dimensions of the pink sections dispersed throughout the gallery represent the optimal prison cell size when painted Baker Miller Pink.

Two-tone elements reappear in Kiwanga’s film A Primer (2017), which is also featured in the exhibition. The film zooms in on objects such as fans and windows to indicate how hospitals encouraged the passage of fresh air for their patients, implementing another form of hygienic control through interior design.

As a result of the divide created by these two-toned palettes, the entire exhibition is characterized by a certain linearity. Sharp lines and edges echo the "thin blue line" and “color line,” which represent law enforcement and racial segregation, respectively. It seems only fitting that civil institutions, from government surveillance to secondary education, aim to keep people “in line.”

“There’s something [in the colors] that calls into question [the idea] of hierarchy…that affects the way we view those institutions,” Kiwanga explained. “[They] are here to help us, but to also form and mold our bodies and behavior.”

Yet there are also moments when the rigid linearity breaks. Black-and-white prints plastered on the walls and floors—some of which depict Paris’s Pitié-Salpêtrière Hospital or were found in Birren’s archives—challenge the organized flatness of the solid colors around it.

Through color and space, Kiwanga prompts us not only to explore how architectural design primed certain physical and physiological responses to institutional environments throughout history, but perhaps also—by standing in her exhibition space—to experience some of those effects ourselves. Ultimately, Kapwani Kiwanga: The sum and its parts draws our attention to the “parts” that make up the “sum” of institutional authority, rejecting a passive acceptance of external control and instead—through research and rigorous inquiry—exposing it through art.

Kapwani Kiwanga: The sum and its parts will be on view at Logan Center Gallery until March 12.

Major support is provided by Etant Donnés Contemporary Art, a program of FACE Foundation, developed in partnership with the Cultural Services of the French Embassy in the United States, with lead funding from the Florence Gould Foundation, the Helen Frankenthaler Foundation, the French Ministry of Culture and Communication, and Institut français-Paris. Additional support from the France Chicago Center at the University of Chicago.