Maroons Off to Hot Start in Winter Season 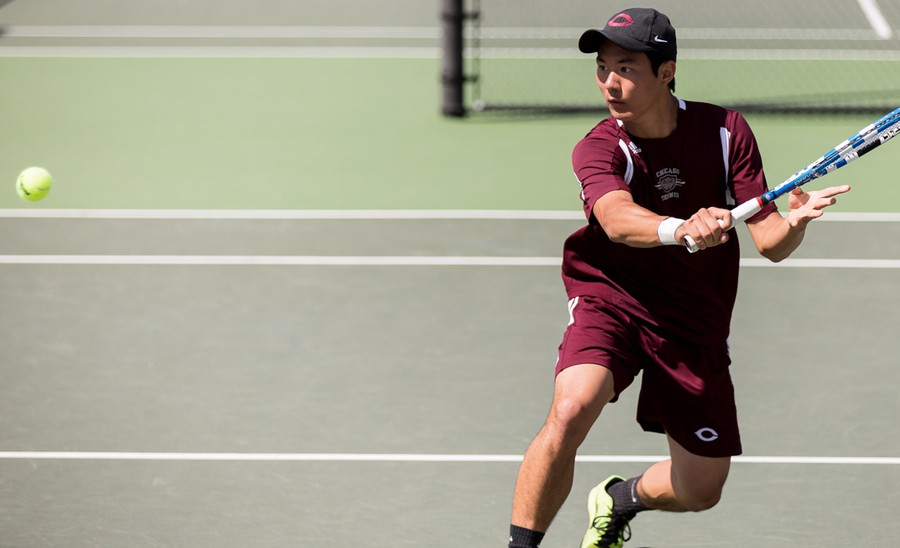 On Saturday, the University of Chicago men’s and women’s tennis teams dominatedin their first matches of the new year, with the men taking down Coe College and the women sweeping Lewis University. The No. 5 Maroon men traveled to Cedar Rapids, Iowa,to face the No. 25 Kohawks in two complete matches. The No. 10 women’s team captured the win against the DII Flyers at home.

Taking the court for the first time since September, the men competed in 18 total matches that were scored as two separate duals. The Maroons began the day with victoriesin all six doubles contests. The top two doubles matches—featuring third-year David Liu and first-year Erik Kerrigan at number one and second-year Charlie Pei and third-year Peter Leung at number two—ended in tiebreaks, 9–8. The other doubles matches ended with the Maroons on top 8–3, 8–0, 8–5,and 8–0.

UChicago came away with an 8–1 victory in the first set of matches and a 9–0 win in the second to improve their overall season record to 3–0. Liu, the reigning Intercollegiate Tennis Association Central Region singles champion, was satisfied with his team’s performance this weekend. “We came into this match wanting to set the tone for the rest of the season,and I think we did that. Of course we had ups and downs, but that’s to be expected in our first match of the season,” he said.

Liu also spoke highly of the team dynamic and is looking forward to seeing the squad progress over the next three months of the season. “The team competed well, and our chemistry is really good right now. Most importantly, this weekend helped us find our strengths and highlighted things we can improve on moving forward,” Liu said. “We should have a great week of practice in preparation for our home matches next weekend,” he added.

In their first competitive team play since October 3, the Maroon women tallied victories in all nine of their matches. The squad dropped one set at each of the top two singles spots, but third-year Ariana Iranpour and first-year Marjorie Antohi came away with the wins in super tiebreaks.The other singles matches ended in two sets,and the Maroons won doubles play 8–6, 8–4, and 8–3.All six UChicago competitors—Iranpour, Antohi, second-year Rachel Kim, fourth-year Tiffany Chen, first-year Estefania Navarro, and first-year Alyssa Rudin—were multiple winners.

The women are now 2–0 this season. The teams are back on the court on Saturday, with the women playing Hope College at 10 a.m. and the men taking on Hope at 1 p.m. and Lewis at 6 p.m. The women’s matchup will feature two top 10 central region teams, withthe Maroons currently ranked first andHope ranked eighth. All three matches will take place at XS Tennis.