UBallet Takes Ballet Beginners Under Its Wing in Swan Lake

New and experienced dancers soared together in UBallet's production of "Swan Lake."

Swan Lake is a perennial classic, famous for Tchaikovsky’s emotional score and Lev Ivanov’s choreography that, from the cursed swans’ woeful fluttering to the jester’s exuberant leaps, captures the profound emotion of the plot. Last weekend, University Ballet of Chicago (UBallet) gave its first full-length production of Swan Lake—an ambitious undertaking for a no-cut ensemble. The music and choreography weave an incredibly nuanced story, making graceful acting as important as graceful dancing, and the 1895 revival choreography, now the standard for performances of Swan Lake, is difficult even for the most seasoned dancers. 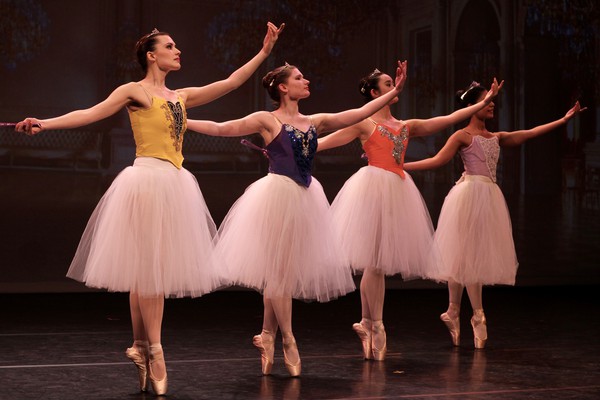 UBallet took the defining classic of a traditionally elite art form and gave it to the curious but uninitiated. Before the curtains parted, Executive Director Zoe Makoul took the stage, explaining how to interpret the pantomime that allows characters to communicate with one another and the audience. The synopsis printed in the program allowed new audience members to follow along by connecting the pantomimed action onstage to the plot points listed in the program. From the start, Makoul and company showed their commitment to making a classic ballet accessible for the new viewers in their audience.

After the final notes of the overture faded away, first-year Samuel David as Jester gleefully opened the ballet at Prince Siegfried’s birthday party. The ladies of the court danced en demi-pointe (on the balls of their feet) in ballet shoes, followed by a pas de trois (dance for three) that highlighted three experienced dancers: second-year Riko Kanaida, third-year Elizabeth Ortiz, and fourth-year Chris Chen. The sets and choreography did not stray far from tradition, except for the lack of men in the cast and the adaptations made in the choreography for newer dancers. Dancers of all levels integrated most fully in the group of cursed swans at the lake, some en demi-pointe, some en pointe (on the tips of their toes), all dancing Ivanov’s iconic choreography in unison. 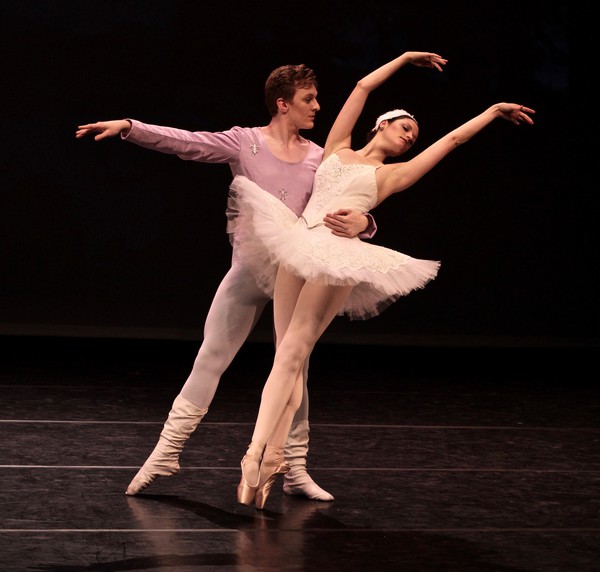 Divinity School graduate student Caroline Anglim was remarkably emotive in her role as Odette; her facial expressions and melancholic wing flutters grounded the emotional arc of the show. Anglim acted the transitions from despair to hope to tragic loss with the faltering reserve that is emblematic of her character. Second-year Kelsey Hopkins drew thunderous applause for executing the notoriously difficult choreography of Odile, bringing an unexpected sweetness to the villain’s puppet. Chris Chen was ominous as Von Rothbart, the villain himself, aided by glowing red light cast on his black feathers. Although his magical mastermind created the conflict, Chen truly shone as a dancer in the pas de trois of the first act. All three of these main dancers, alongside the other ballerinas who danced en pointe, belied their lack of experience in ballet. Their mastery of core roles supported the performances of newer dancers and made the ballet a success.

Throughout the performance, the spirit of learning invoked by Makoul in her opening remarks rang true. From bringing in first-time viewers with a pantomime briefing to featuring dancers who had never done ballet before rehearsals began, UBallet made its philosophy clear: ballet is for everyone. There were several moments during the performance, watching steps that felt beautiful but accessible, when I caught myself thinking that I could possibly dance ballet, too.

If you’d like to try your hand (and feet), auditions for Romeo and Juliet, UBallet’s next tryst with Tchaikovsky, will be held on Sunday, February 5. Everyone who auditions will receive both a part in the show and the opportunity to learn about an amazing art form from performers who seek to spread the love of ballet.

UBallet is holding auditions for Romeo and Juliet by Sergei Prokofiev, not Pyotr Ilych Tchaikovsky.