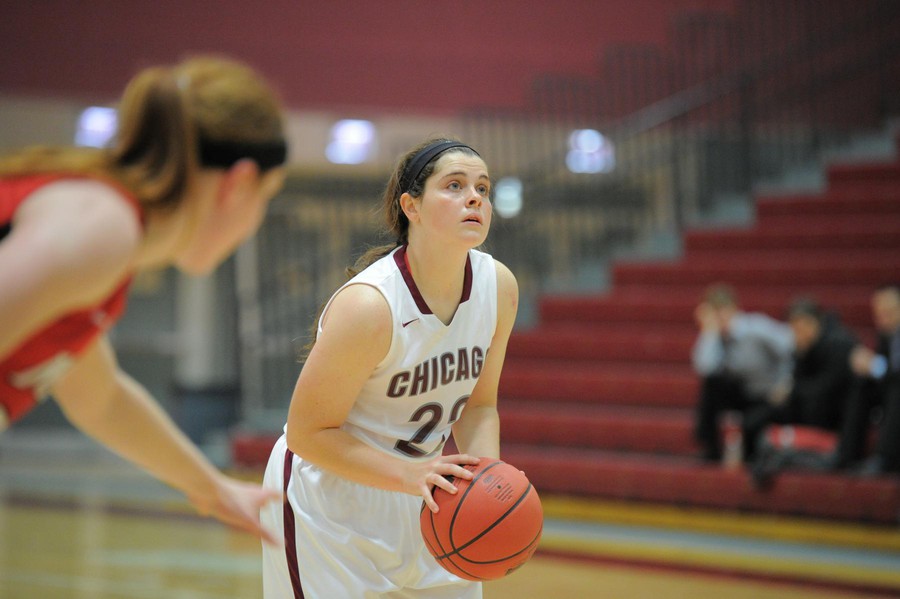 The South Siders opened UAA competition with a bang on Saturday as the unbeaten No. 5 Wash U Bears rolled into Ratner Athletics Center. In a classic rivalry showdown, the Maroons’ toughness proved to be too much down the stretch, as Chicago handed the Bears their first loss of the season with a final score of 75–68.

The two UAA powerhouses were in a battle from the opening tip. After a stalemate during the first ten minutes of action, the Maroons began to flex their muscles in the second quarter. First-year Pennsylvania-native Taylor Lake closed the half, scoring five unanswered points, a handful of her 16 first-half points, to give the Maroons a 41–35 edge at intermission.

In a second half full of runs, the Chicago defense weathered the counterpunches and stood firm in the final moments. With the Maroons holding a double-digit lead early on in the fourth quarter, the Bears surged back with a 13–2 run of their own. Clinging to a 68–66 lead with just two minutes remaining, Chicago’s defense answered the call. With just a five-point cushion and 24 seconds remaining, first-year guard Miranda Burt grabbed her second steal of the night on the Wash U inbound, sealing the game for the South Siders. The Maroons took advantage of their opportunities at the charity stripe, converting seven of eight free throws down the stretch.

Lake credited the victory to an excellent week of training. “The practices this past week were a huge key,” Lake said. “We went hard every practice and made the most of every one, which helped us gain confidence in our game.”

Looking ahead, Lake described the win as a testament to her team’s potential. “I see this win serving as a reminder that we can beat any team if we play hard and believe in each other for all 40 minutes,” she said.

Saturday’s victory marks Chicago’s second straight win over a ranked Wash U opponent, dating back to last year’s season finale at Ratner Athletic Center when the Maroons defeated the ninth-ranked Bears by a score of 82–70 on Senior Night. Further, this win is especially exciting considering that the South Siders have not been able to defeat the Bears in consecutive games for the past four years. Interestingly enough, the Maroons also have missed the NCAA tournament those four years, while Wash U went on to compete late into the post season.

The South Siders (8–4, 1–0 UAA) will travel to New York on Friday to take on the red-hot No. 22 University of Rochester (10–2, 1–0 UAA). The Rochester Yellowjackets come into the contest on a four-game winning streak, capturing a victory in their UAA opener against Emory on Saturday. On Sunday, the squad will head to Atlanta to take on the Emory Eagles, Rochester’s travel partner.

Tip-off for Friday’s contest is scheduled for 6 p.m. Eastern Time, while Sunday’s game will occur at 2 p.m. Eastern.