History, Hysterics, and The Dun 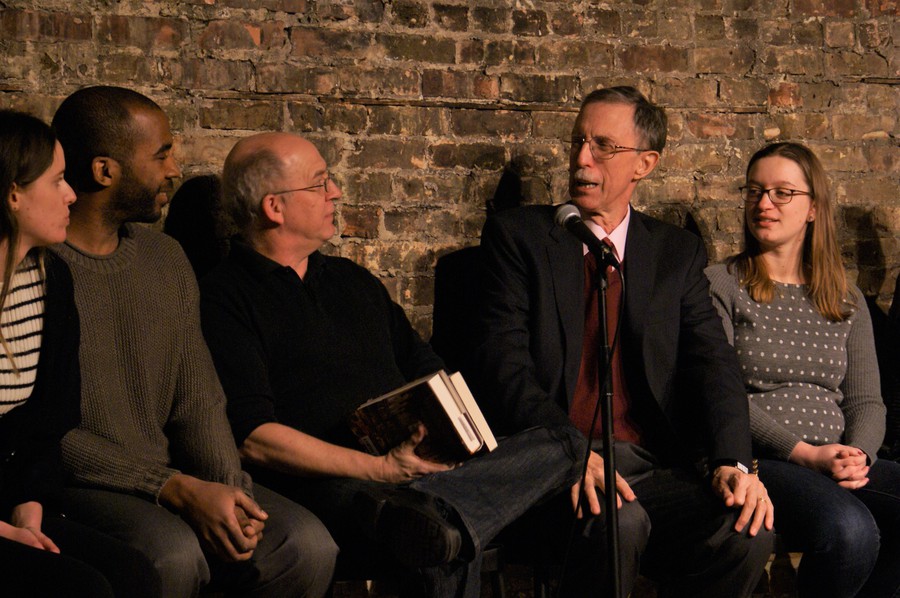 Dean Boyer is featured in improv comedy alongside students and faculty in The Revival's The Hutchins Plan.

UChicago alums were instrumental in the rise of improv comedy: Mike Nichols (X ’53), Elaine May (though she hitchhiked across the U.S. to attend classes, she never formally enrolled), and Paul Sills (A.B. ’51) founded The Compass Players and performed at a Hyde Park street corner—55th Street and University Avenue—between 1955 and 1958.

Since its opening in 2015 on that same corner, The Revival’s modus operandi has been to bring improv comedy back to its birthplace on Chicago’s South Side. “The Hutchins Plan,” a semimonthly fixture at The Revival, pays homage to the University’s role in improv history. Named after former University president Robert Maynard Hutchins (1929–1951), each hour-long show is framed around monologues by faculty guests—usually about their interests or field of study—which are riffed upon by an ensemble of former and current UChicago students.

As host, ensemble member, and Law School professor Randy Picker noted, the guest of Friday’s show needed no introduction: Dean of the College John W. Boyer. Though always aimed toward a University-affiliated audience, this installment of “The Hutchins Plan” promised to be especially UChicago-centric. Former presidents of the University cropped up as popular subjects; a life-size cardboard cutout of Hutchins himself, perched on the stage, confirmed as much.

To start, Picker sat Boyer down alongside the ensemble for an interview about Hutchins (turns out the University’s fifth president was an inveterate golfer, and considered quite the heartthrob among undergraduate women), then opened the floor to even more candid questions from the ensemble.

“Say the University invites someone to speak on campus, but he’s straight-up Hitler,” third-year Val Bodurtha asked. “If Jake Bittle is revving up to puke on him at an IOP event, and you have the option to deflect the vomit with a silver tray, but splash it on innocent students in the first row, do you do it?”

With mock bashfulness, Kevin Shang (A.B. ’16) shot up his hand. “What’s the story of your first kiss?”

The group proceeded to tie together the disparate themes (first kisses, golf, The University of Chicago: A History) in a series of irreverent scenes, plus a cheeky nod to an infamous headline from the past year. (“Mom, don’t get me wrong—I’m still really excited to go to UChicago in the fall, but I wish they’d stop sending me hate mail! There was the first one, and now this one just says: ‘Marla Ignatius, go fuck yourself!’”)

Sometimes awkward, sometimes slow, last week’s historically-steeped “Hutchins Plan” shone in moments that united the past and present. After taking a predictable audience suggestion for a theme (“Habsburgs!”), Boyer characterized Franz Joseph I as a cunning leader masquerading as a simpleton. This inspired an imagined dialogue between the “real” Donald Trump (Picker)—an enlightened enthusiast of Plato—and supposed puppet master Kellyanne Conway (Bodurtha). The next monologue used the much-circulated “Dun Boyir” meme as a launching pad, though Picker missed the reference.

“It’s a very inept portrait of me,” Boyer said, by way of explanation.

Boyer’s second monologue quickly returned to the University’s presidents and their personal quirks. William Rainey Harper apparently had a habit of playing the clarinet around campus like a pied piper; Hutchins once tried to commercialize the College’s Great Books collection, selling books “by white male authors” as a marketing ploy for the University.

“They deserved memes, too,” Boyer said.