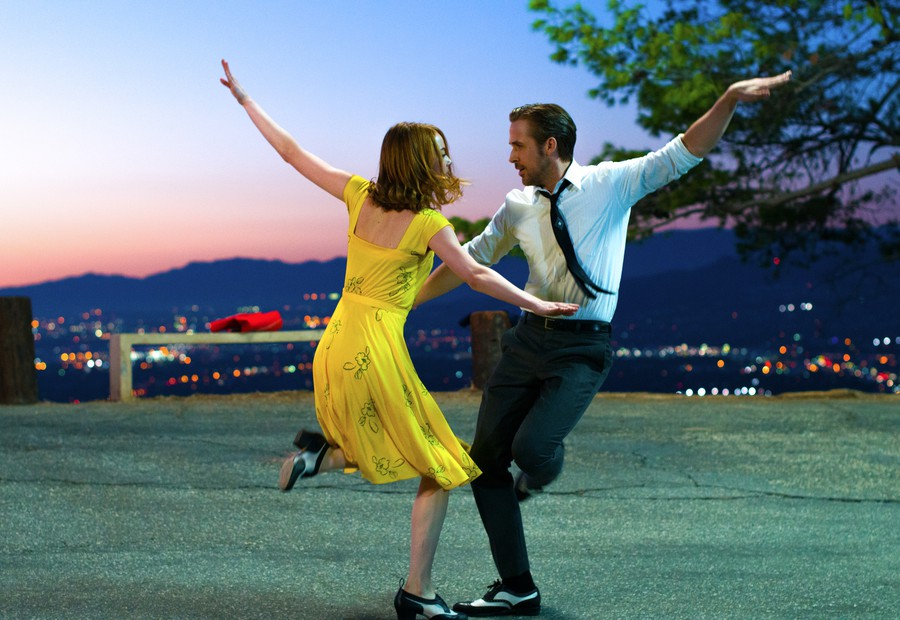 Debbie Reynolds’s recent passing brought to mind one of my favorite movies—Singin’ in the Rain—and the special magic of musicals. My dad likes to joke that we own just about every Oscar-winning musical from the 1940s and ’50s. I grew up singing along to classics like My Fair Lady, West Side Story, An American in Paris, and, of course, Singin’ in the Rain; movies with infectious songs and swirling dance numbers would leave me humming along and tapping my feet long after the credits rolled.

The opening scene of La La Land taps into that same unabashed delight. A typical L.A. traffic jam bursts into a technicolor whirlwind of movement and music; honking horns and car radios unfurl into a big, bouncy melody and commuters leap from their vehicles to dance on car roofs and highway dividers. The city stretches out in the background, bathed in sunlight, the horizon shimmering with heat and the tantalizing promise of success. It’s a bold opening, over-the-top and bursting with almost frantic energy, but deliciously earnest.

Out of the traffic jam emerge the two main characters: Mia (Emma Stone), a barista with dreams of being an actress, and Sebastian (Ryan Gosling), a struggling pianist and jazz purist with hopes of opening his own club. She has just failed yet another audition and he is having trouble paying his bills, preferring to rail against a salsa tapas bar that has replaced a venerated jazz club.

After the usual series of chance encounters, the two accept their chemistry and their romance doubles as a love letter to L.A. and the arts. They watch Rebel Without a Cause in an old theater, go to a jazz club, and waltz around the Griffith Observatory in colorful, sun-drenched scenes offset by palm trees. And as their love blossoms, so do their dreams: Sebastian encourages Mia to write an autobiographical one-woman show, and he joins the fusion band of an old friend (John Legend).  Yet the poor response to Mia’s play and Sebastian’s ambivalence toward the band put pressure on their relationship. The pursuit of dreams is often consuming: When love threatens to suffocate those dreams, what then?

Stone and Gosling channel the same easy chemistry from Crazy Stupid Love, imbuing their relationship with charm and sincerity. The relatively pared-down nature of their performances anchor the film against its lush, saturated backdrop—a slight dose of realism in the ethereal City of Stars. And as very real people struggling in a fantasy, the pair are no Fred and Ginger: they dance somewhat stiffly and sing sometimes imperfectly. The breathiness and slight catches of Stone’s voice in the emotional solo “Audition (The Fools Who Dream)” evoke the melancholy and delicate charm of “Moon River” in Breakfast at Tiffany’s.

La La Land marks director Damien Chazelle and composer Justin Hurwitz’s second collaboration. As in Whiplash, their first collaboration and another Best Picture nominee, La La Land explores commitment to one’s craft, set to an evocative score. Yet while Whiplash was often introspective, La La Land is inclined to wear its heart on its sleeve, exploring how one can balance love and the pursuit of art, if at all. Hurwitz’s score is perfectly paced—at times lingering sweetly, other times punchy as a car revving up on L.A.’s highways—and delivers well-timed doses of nostalgia to balance the film’s modern core.

Charming and endearing—old-fashioned words describe a movie that lovingly reworks the old-fashioned for the present. I walked out of the theater with a silly grin on my face, feeling rather like Gene Kelly as he swung around a streetlight in the pouring rain. “What a glorious feelin’/ I’m happy again.”