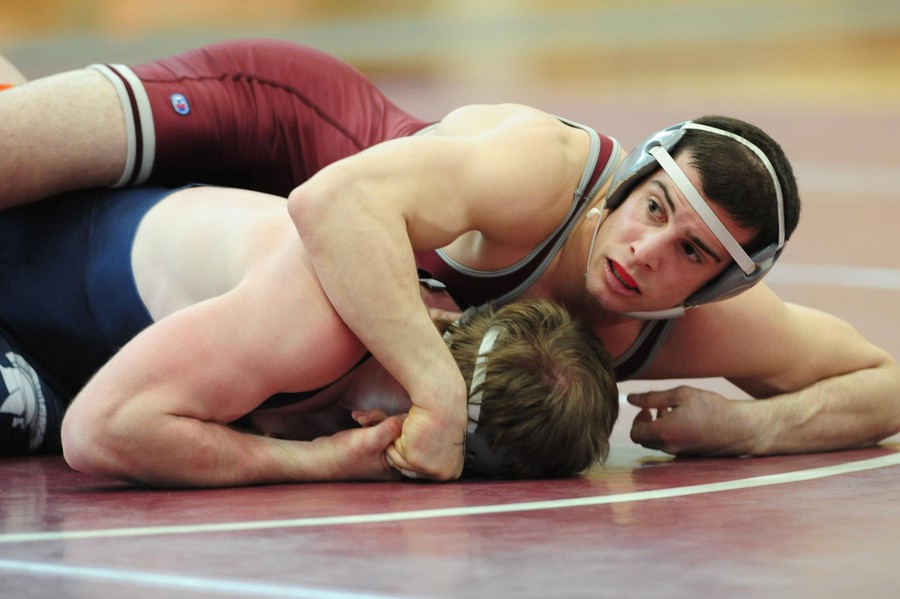 Fourth-year Paul Papoutsis pins down his opponent with intensity.

This past Saturday, the Maroons played host to a seven-team field at the Henry Crown Field House on campus. The other participants in the Division III contest were regional schools, including the host Chicago, University of Dubuque, Manchester University, Milwaukee School of Engineering, Saint John’s University, Trine University, and Wabash College.

Coming into the matches, the South Siders had compiled a winning 10–6 record in dual meets since the 2013– 2014 season. The team also featured six wrestlers possessing double-digit wins under their belt. Strong contributions from top to bottom of the roster resulted in a hat trick of wins for the Maroons on the weekend, catapulting them to 13–6 in the duals.

In a match against the Trine University Thunder that included two for- feits, the South Siders took matters into their own hands to take seven out of the last eight matches. Team members from opposite ends of the experience spectrum were able to pin their opponents with first-years Kahlan Lee-Lermer (149 pounds) and Adam Rizk (heavyweight), and fourth-year Michael Sepke (165 pounds) coming out on top.

Additional results from the talented class of first-years included Grant Morrison (141 pounds) and Steve Bonsall (157 pounds) winning their respective matches by major decision. This means that a wrestler wins from points alone, as long as the margin of victory is eight points or greater and less than the 15 points required for a technical fall.

The second clash of the day ended with a 25–16 decision over Dubuque. The Dubuque team received an initial boost with two forfeits from the Maroons, giving them a 12–0 lead. However, UChicago was not to be left in the dust, as they stormed back to sweep the next seven games. Second-year John Jayne (195 pounds) was quick to pin his opponent in the first round. An impressive display from first-year Kyle Peisker (157 pounds) resulted in an 11–0 shutout of his opponent, while second-year Jason Lynch (184 pounds) was able to earn a major decision as well.

In the third and last contest, the South Siders once again came from behind to defeat Manchester University 33–16. A forfeit, a major decision, and a pin in the first three matches put the Manchester Spartans up. Unfortunately, those were all the points they would muster, as the Maroons won the next seven matches in a row to cruise to a convincing win. First-year duo Lee-Lermer and Rizk earned pins once again, and Lynch and Bonsall each dominated to claim technical fall victories. The matches of Sepke and third-year Nicholas DiNapoli both concluded in 11–3 major decisions for the veteran duo.

When asked to reflect on the dual meet, fourth-year captain Paul Papoutsis highlighted the contributions of the most recent additions to the squad. “The first-years played a huge role,” Papoutsis said. “The younger guys really stepped up and got some big wins so the team could come out on top.”

About how the team could use this momentum going forward, Papoutsis said, “We need to continue to improve our technique and physical condition. As the season goes on, it’s important not to become complacent.”

The team’s next fixture is the Elmhurst Invitational this Saturday, January 14.