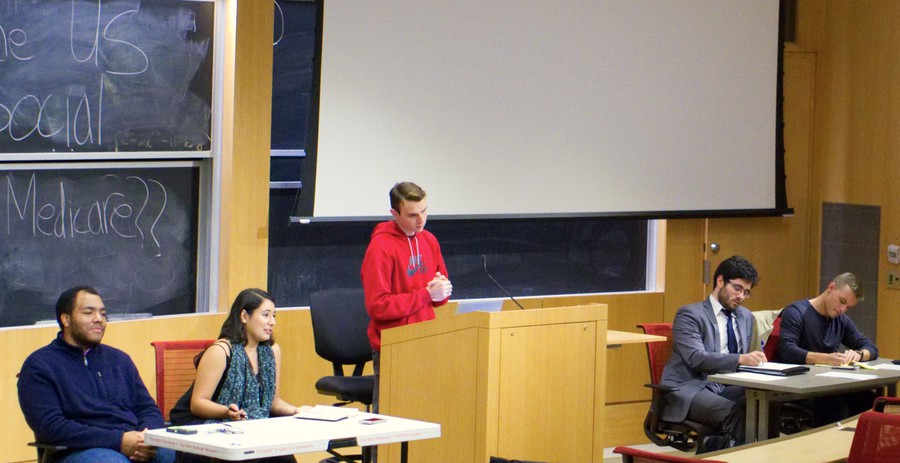 College Republicans and UC Democrats join a debate on medicare and social security hosted by the UChicago Political Union (UCPU).

The UChicago Political Union (UCPU) hosted the College Republicans and UC Dems on Wednesday for a debate on whether the United States should cut Social Security and Medicare.

The Dems framed their argument around a call to amend and improve Social Security and Medicare, but not outright abandon the programs. The Republicans were quick to agree, saying, “We don’t want to see people left despondent.” The question on the table then became how to fund the programs, or how to change them enough to make funding practical.

The Republicans’ primary suggestion was to raise the minimum retirement age, thus lowering entitlement spending and increasing tax returns as people remain in the workforce longer. They argued that raising taxes on the rich has not been working, as the one percent makes much of its money outside of paychecks.

Third-year and UC Dems president Anaïs Rosenblatt argued that we need to drive down exorbitant health-care costs rather than restrict coverage to meet cost constraints. “It’s one thing to say you don’t want to cut people off, but put your policy where your mouth is,” she said.

She and her debate partner, fourth-year and UC Dems treasurer Daniel Jellins, added that in more labor-intensive lines of work, it’s not always feasible to stay in the workforce until old age. They said that raising the retirement age, as the United States has 20 times in the past eight years, is not a solution.

Third-year and UCPU president Adam Chan said the debate topic was chosen because it holds no bias toward either side and because both clubs agreed it would facilitate an interesting discussion.

“At UChicago, where we tend to lean left, you’re not going to get someone who will just say ‘eliminate, eliminate!’ You’ll instead get more into the details of the plans,” he said. A preliminary poll of the audience at the debate indicated a vast Democrat majority.

Fourth-year Matthew Foldi, president of College Republicans, remarked, “If they say people over 65, in essence, can’t work, the question I wanted to ask them [UC Dems] was, ‘Can Bernie Sanders be president?’” Another member interjected that this would also rule out Donald Trump.

“In essence, whether a Democrat or a Republican, you want to help people that are over the age of 65 or at some retirement age,” said second-year Eugene Miravete, who argued for the College Republicans along with fourth-year James Miller. “The problem is, if…the math doesn’t work out, they’re not going to get the money.”

“Though we disagree, we were incredibly happy to have the debate,” Foldi said, adding that he looks forward to future debates. “It was good to have some cross-partisan dialogue.”

UCPU describes itself on its Facebook page as focused on providing a space for political discourse among people with diverse views. The group hosts regular debates and has monthly meetings at the Institute of Politics.