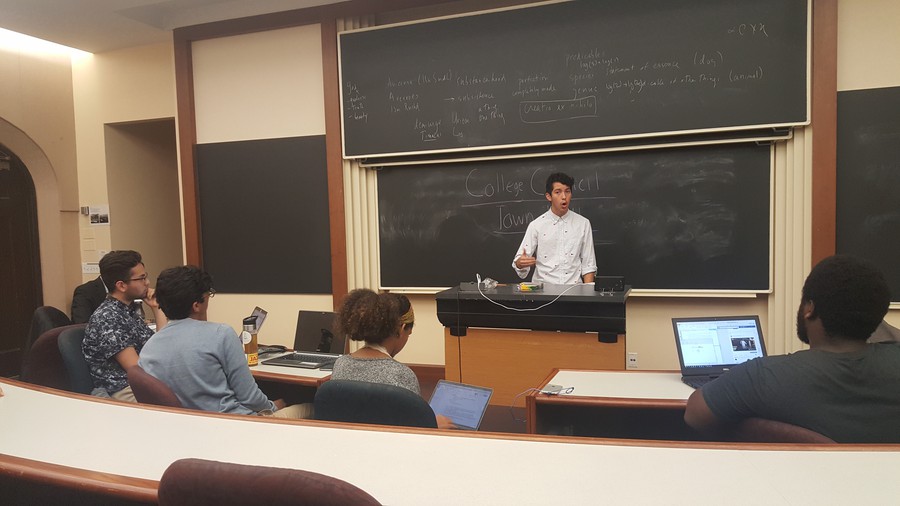 First-years running for College Council participated in a debate hosted by the Chicago Debate Society (CDS) on Tuesday, sharing their ideas on issues including sexual assault, controversial speakers, and support for undocumented students.

Ten of the 18 candidates running to represent the Class of 2021 were present at the debate. The election began on Wednesday and will continue until Friday at 4:30 p.m.

Anand Shah, Cheyenne Wakeland-Hart, and Emilio Balderas are running on the “JACE” slate. They met during the Chicago Bound pre-orientation program, and their platform focused on providing University-subsidized housing for cultural groups on campus, such as Movimiento Estudiantial Chicanx de Aztlán (MEChA).

Josue Sican, who did not attend the debate, is the fourth member of that slate.

Zeeshan Khan, Myles Hudson, Raven Rainey, and Tony Ma are running together as the “ZMRT” slate, which says its priorities are diversity, community engagement, and student life.

Candidates universally expressed support for undocumented students as well as for initiatives to expand access to menstrual products. College Council was active on both of these issues last year.

The candidates generally disagreed with College Council’s past support for the Boycott, Divestment, and Sanctions (BDS) movement, expressed in an April 2016 resolution in favor of divesting from companies tied to Israel. Candidates rejected the measure, seeing it as outside College Council’s mandate.

"College Council's job is not to be advocating for specific international political issues,” Morales said. “If we advocate for BDS, it ultimately means that we're drawing away time from other important issues, [and] we are in over our heads when we talk about this issue."

Others expressed concern that divestment would cause unnecessary economic pain.

“BDS cripples the regional economy, hurting Jews and Palestinians alike,” Ma said. “It leads more people into unemployment, which leads to extremism, which leads to more lasting conflicts in that region."

Turning to campus life, candidates clashed over the University’s relationship to fraternities. Most were explicit about the need to reform Greek life, with Trivedi arguing that sexual assault “surrounds fraternities.”

“I don't personally believe that there's anything wrong with having a party,” Balderas said. “It's just remaining in constant dialogue with RSOs, so that when there are parties, they aren't damaging to certain groups on campus, and that it is open and inclusive for all students."

Morales pushed back, arguing that the focus on fraternities is misguided.

"I think it's important not to conflate fraternities automatically with sexual assault or racism,” Morales said. “I think the right question is how do we react when something goes wrong in a fraternity, and how do we prevent it from happening?”

At one point, candidates were asked whether UChicago should become a smoke-free campus. Most candidates thought the proposal went too far, but were sympathetic to limiting areas on campus that allowed smoking. Trivedi was more in favor of the smoke-free proposal, but also  supported designated smoking areas rather than a total ban.

When asked whether candidates’ goals are achievable in College Council, most expressed cautious optimism.

"There’s a very limited budget, but we are failing to take into account where our true power comes from,” Balderas said. “We're a representative of the Class of 2021. That means we're elected by 1,500 students, and that means what we say matters.”