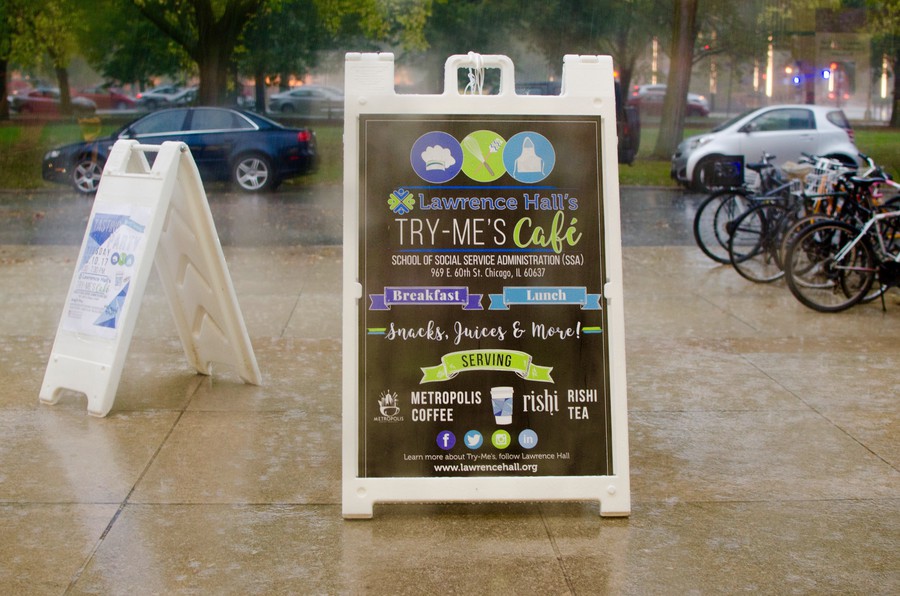 Try-Me’s café is located south of the midway on the SSA building’s ground floor.

Try-Me’s café at the School of Social Service Administration (SSA) celebrated its grand opening on Tuesday, October 10. The café is run by Lawrence Hall, a youth and family services organization.

A “tasting party” took place in the SSA lobby, offering a selection of the café’s menu options, including salads, wraps, bagels, and coffee from Metropolis, the high-end coffee roaster that the café sources from.

The café’s soft opening was in April. The youth crew members employed by the café underwent training throughout the summer in preparation for Tuesday’s grand opening. According to Sean McGinnis, vice president of the youth community development programs at Lawrence Hall, the event was a success, with around 100 people attending. There were no opening remarks, but representatives from Lawrence Hall attended to share more about the program and their initiatives.

The café is an expansion of Lawrence Hall’s culinary arts program, aimed at mentoring and training youths with real work experience. “What happens is, they work with me for six to nine months. At about month six, we start working on job skills—finding them better jobs,” said Damond Hayes, the manager of the café and instructor of the four youth crew members at Try-Me’s. “Training goes from in the café to more of getting prepared for career development.”

It takes Parvion McDonald, a 20-year-old employee living in Calumet City, almost two hours of commute to get to Try-Me’s. “[The commute is] worth it because I like doing it. It’s fun. People come in, I give ‘em a smile, thank you, have a nice day,” Parvion said.

Try-Me’s is open from 8 a.m.–7 p.m. on weekdays, with shorter hours on the weekends.

The cafe is run by Lawrence Hall, a nonprofit which works with at-risk Chicago youth.