Catching Up With Ta-Nehisi Coates

“Our story is a tragedy. I know it sounds odd, but that belief does not depress me. It focuses me.”

By Brooke Nagler   and May Huang 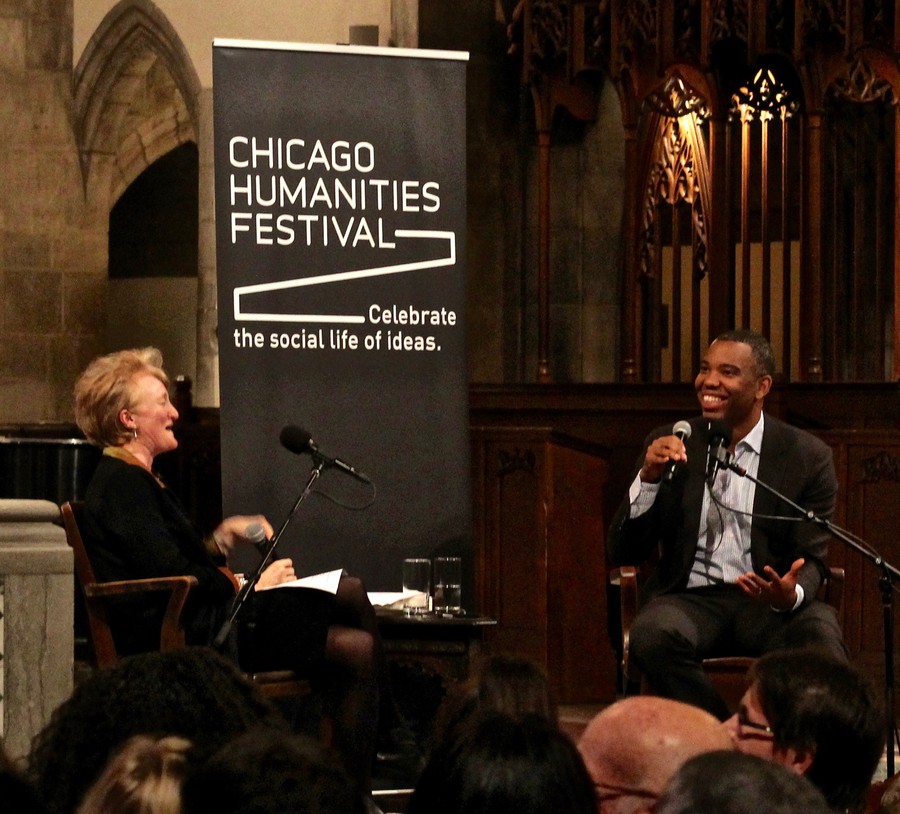 Krista Tippett (left) interviews Ta-Nehisi Coates (right) for her podcast "On Being."

The line outside Rockefeller Chapel stretched around the corner of 59th Street and all the way up South Woodlawn Avenue last Thursday night, as over 1,500 people waited to hear a live recording of Krista Tippett’s On Being podcast with author and educator Ta-Nehisi Coates.

A staple in the radio and podcast world, On Being features thought-provoking interviews with individuals from a range of professions: doctors to activists, artists to historians. Since 2001, Tippett has prompted conversations that illuminate the vastness of human experience, earning her recognition with the National Humanities Medal, awarded by former president Barack Obama in 2014.

As a national correspondent for The Atlantic and an author of three books and a comic series, Coates has written a great deal about cultural and political issues, focusing largely on their relations to race. In 2015 he won the National Book Award for Nonfiction for Between the World and Me and received a “genius grant” from the Macarthur Foundation. Coates has just released a new book this month, titled We Were Eight Years in Power, and began working with Marvel to write a Black Panther comic series.

An intensely illuminating and provocative interview, last Thursday’s event officially kicked off the Chicago Humanities Festival's Fallfest/17, centered around the theme of Belief. The hour and a half-long conversation highlighted Coates’s views on the current state of the nation and shed light on the influences and experiences that brought him to those conclusions.

Tippett traditionally begins her conversations by asking her interviewees about their spiritual background, a subject that segued into a discussion of how Coates challenges the “myth of providential progress”—the idea that history naturally bends towards justice through divine intervention.

“I don’t know how you measure that against the very human practice of repeating brutality over and over again,” remarked Coates, who believes that the notion of linking historical “progress” to providence is always wrong. To him, thinking of cruelty as a “long-term historical process” does injustice to the individuals whose “history ended the minute they were snuffed out.”

“Providential understanding makes them bricks in a road in order to give it a happy ending, to say it was all worth it,” Coates said. Later, he wondered aloud why the compassion that people are demonstrating now was absent before. Without asking this question of ourselves, he said, the brutality of history repeats itself.

Such thoughts are decisively pessimistic, but Coates made it clear that his aim is not to locate hope, although—as Tippet remarked—white people often seem to ask that of him. Trained as a journalist, Coates explained that “there’s not a criteria” for hope in journalism, a profession that asks writers to “write” the wrong in the world. (As a history major, he also quipped that those who want to be depressed should “go to the University of Chicago’s history department.”)

Although Coates could not speak to his own hope, he nonetheless described experiences that imbued him with an unbreakable confidence. He discussed his time at Howard University, a historically black college, where he met—after growing up in a culture where “black people are not depicted as beautiful”—black students who were both beautiful and brilliant.

“I felt like I could fight anybody,” he said, reflecting on the newfound sense of self he found after graduation. “I felt so armed and confident.”

“I listened to his lectures, and I just felt free,” he explained. Malcolm X showed Coates that he did not have to change the way he moved through the world to accommodate other people. He could own his writing style—to “write as you hear it.”

“If you’re black in this world…nobody slows down for you,” said Coates. When his journalist colleagues made jokes about indie bands he did not know, Coates told himself that he needed to “catch up.” And now he gives the same advice to his readers. 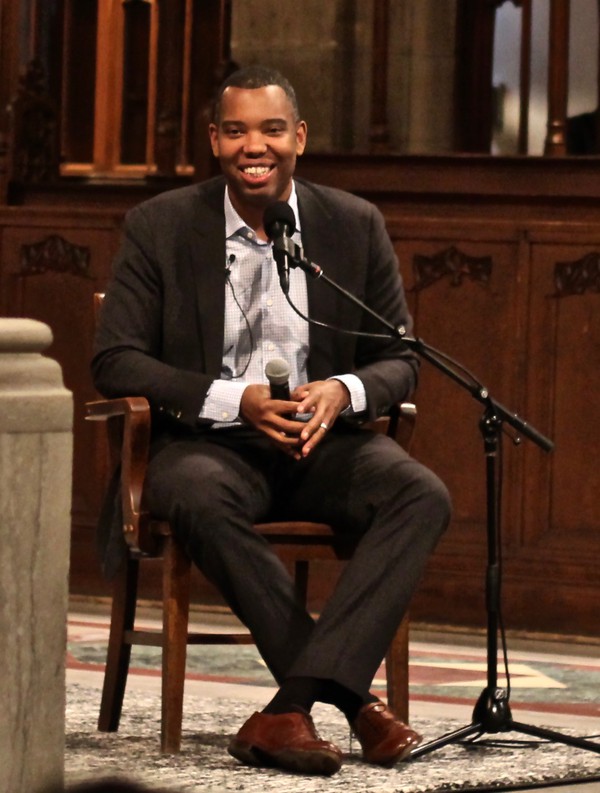 But the extent to which people—especially white people—are “catching up” was also a subject of discourse.

During the conversation, Tippet gestured to the irony of how she, as someone who “carries the heritage of cruelty in her white body,” is in dialogue with Coates about that very heritage. “I’m a white person,” she asked. “What do you want me to do?”

“You and I are in the cage,” he responded. The structures of oppression in America took so long to build; no one trapped within them can immediately escape.

Although Coates initially spoke about the universality of the power dynamics he writes about, in response to Tippett’s question about why white people like his work, he later questioned the premise of her assumption. He clarified that white people do not necessarily “like” his work (he joked that was the reason why attendees had to pass through security).

The question one should ask is not why white people like his work, just as the question is not where one may find hope. Tippett perhaps recognized this, but could not seem to stray from it, resulting in certain moments that missed the mark or lacked understanding. Eventually, she rephrased her question, asking why Coates has become “a voice.”

In many ways, Coates shares her curiosity, and expressed his bemusement during the Q&A section of the podcast as to why he felt that he had no authority to answer many of the questions. He admitted he was stumped when asked for advice about teaching history or identifying the most pressing legal challenge of coming years. Demonstrating a humility that was palpable throughout the evening, Coates said he believes that people cannot truly know everything, and that he did not want to be known as a “public intellectual.”

Coates nonetheless made an effort to answer the last question, posed by middle school teachers who wondered how to help students remain optimistic under the current administration. Coates’s response brought the conversation full circle. One should not be looking for hope, he argued. Instead, we should ask, “Why is this okay?” and look for the truth. As he said at one point during the conversation, “What we need to do...is get to a place where citizens are encouraged to see their history critically.” He advocated for a serious examination of the influence of the past and its implications on the present.

In We Were Eight Years in Power, Coates writes: “Our story is a tragedy. I know it sounds odd, but that belief does not depress me. It focuses me.”

What we need to do is focus, looking not for reasons to hope, but rather reasons why the world is in its current condition. Change is not a matter of optimism or ignorance; it requires understanding, persevering, and catching up.

The live recording was the kickoff event for the Chicago Humanities Festival's Fallfest/17: Belief.