An Education on Masseduction 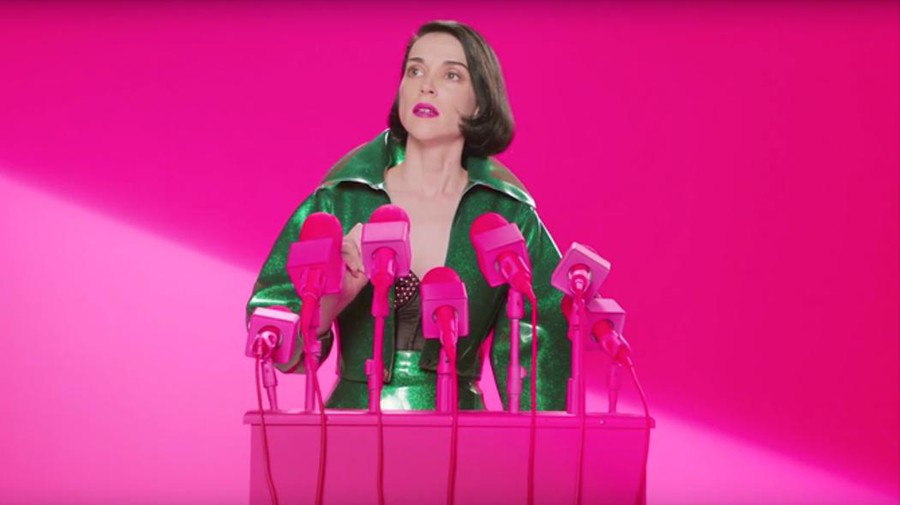 MASSEDUCTION is as much a contemporary piece of performance art as it is a musical record. Musicians have been seizing upon the intertextual possibilities of album releases for decades now, collaborating with visual artists on LP covers, filmmakers on music videos and full-length features (à la Lemonade), and even programmers on interactive mobile apps like Björk for Biophilia. However, St. Vincent’s latest album, MASSEDUCTION, truly capitalizes on the myriad media available, creating an immersive (anti)social media experience which truly embodies her pre-campaign claim: “The personal is political.”

An early harbinger of this Armageddon of an album took the form of an Instagram video claiming to be “A Very Special Announcement” that didn’t actually impart any information. The snippet featured the latest incarnation of Annie Clark: dressed in a futuristic green jumpsuit, her spectral face framed by curtains of sleek, black hair. Over the next three months, this new persona would be solidified as more promotional material was released on the account. Most of these were interview segments in which the questions were supplanted by generic “insert” statements, perhaps to scoff at the shallowness of the celebrity interviews that Clark herself has endured—as if saving herself the trouble of being asked another “question about being a woman in music.”

Next came her first single, “New York,” uploaded as a YouTube video in which the audio superposed a saturated image of thigh-high stiletto boots protruding from a blank backdrop. The same monochromatic, minimalist aesthetic is apparent in the Facebook livestream the guitar virtuoso hosted a few months later, in which she stood behind a podium overwhelmed by microphones and commenced to take “questions in the style of Sarah Huckabee Sanders: brusque, defensive, and with the subtle threat of physical violence in each response.” St. Vincent cast an absurdist light on the media practice with her vague, eccentric responses, one of which being, “I didn’t answer your question, but I did give you a lot of food for thought.”

Later, in October, a select group of people were allowed to venture through a labyrinth of art-installation-puzzle hybrids that lead them to MP3 audios of the unreleased songs, each room reifying one of the 13 songs on MASSEDUCTION. Clark’s latest “archetype” then emerged from the social media cocoon in which it had been incubating for months and spread its sinister, seductive wings. Of her metamorphosis, Clark notes how her 2011 Strange Mercy featured a “housewife on pills,” her subsequent album was headed by a “near-future cult leader,” and now MASSEDUCTION reflects a “dominatrix at the mental institution: sexy but very arch, and very, very absurd too.”

In addition to this Bowie-esque transformation, MASSEDUCTION represents St. Vincent’s musical and lyrical growth. While songs like the post-apocalyptic “Fear The Future” signal a faithfulness to the angularly alien atmosphere that pervaded most of St. Vincent, others, like “Dancing With A Ghost” and “Slow Disco,” exude a symphonic sadness and simplicity that seem derivative of her older work, often described as sonically shyer than her current oeuvre. An analogous, thematic continuity is apparent in the opening track, “Hang On Me,” in which Clark pursues the sense of kinship between outsiders, reconciling alienation with acceptance in much the same way that the lyrics alternate between first and second person and her soft, muffled croons melt into the deep, assertive bass in the background. A similarly self-destructive tone dominates the title-track, where a vocally acrobatic chorus laments a Sisyphean struggle: “I can’t turn off what turns me on.”

Perhaps the least aesthetically stimulating but most emotionally engaging song is “Happy Birthday, Johnny.” This is a personal piano ballad that contextualizes fame by situating it within a single, socially imbalanced relationship threatening to tear itself asunder. Instrumentals are humbler here, allowing more leeway for St. Vincent’s untampered vocals to expose an emotional complex that is at once affectionate, self-loathing, and apologetic. In the second single, ambitious guitar riffs coalesce with satirical lyrics in “Los Ageless,” where absurdist sound complements the flamboyant settings of the music video.

While some may decry the vast divergences between the songs on this album, I find the diversity comforting and quite relatable. What better than the contrast between kinky skepticism in “Savior” and the deceptively upbeat “Young Lover,” a tragedy about an overdosed partner, to illustrate the intricate nuances of the human experience? If the tracks on MASSEDUCTION seem slightly more intimate than Clark’s previous works, that’s because they are. “You can't fact-check it,” she said in a press release, “but if you want to know about my life, listen to this record.” Yet, while the tabloids ambushed the possibility of references to her past relationship with model/actress Cara Delevingne in songs like “Young Lover” and even “New York,” she maintains in a Vogue interview that “songs are Rorschach tests anyway. They say more about you than the person who made them.”

Mobilizing installation art and Instagram posts, Facebook livestreams and “cartoon scroll[s],” St. Vincent presents to the world a multimedia masterpiece teetering between the profoundly private and the prominently political, arguably her most confessional and most relatable album.