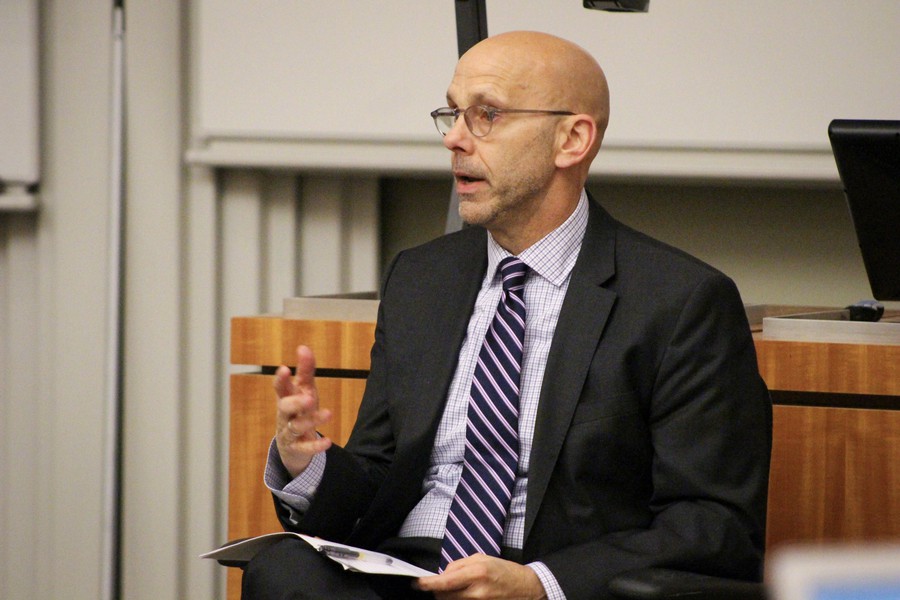 By Brad Subramaniam   and Tony Brooks

The Student Government (SG) Assembly met Monday in the Charles M. Harper Center, where they discussed steps that the University has taken in response to the repeal of Deferred Action for Childhood Arrivals (DACA) and other topics related to student life.

The meeting included a brief discussion with Michael Hayes, the assistant vice president for student life.

He spoke about steps that the University has taken to aid students affected by DACA. The school will sponsor several events throughout the school year for students affected, including a “Know Your Rights” workshop at the Center for Identity and Inclusion on November 6.

“I chair a group right now that’s been working on responses to DACA,” he said. “We have been meeting weekly since about the middle of last year.”

The University held a workshop in September to offer legal screenings and aid DACA renewal for students. “There’s this really robust website, undocumented.uchicago.edu,” he said. “There’s a fairly robust FAQ about DACA on that website.” The website clarifies that the University police will not be engaging in immigration enforcement work, as it is not part of their mission.

He also spoke about how the University is planning to enhance student life, including the possibility of consolidating the administrations of the Reynolds Club and Ida Noyes to make them more like student centers at other schools. As of now, those spaces function independently despite their similar aims.

“Both of those spaces are very student-facing. Most of our RSOs’ big student events happen in those spaces,” he said. “We’re trying to create a way to see those more closely aligned as what you would classify as campus life centers.”

In addition to discussions about student life, the Assembly voted in favor of several proposed changes to their nomination and election process, including amendments to policy regarding printing access. They also added that SG officials can be impeached for leaking ballot results, in part as a response to a recent incident at Northwestern University where their student government officials leaked election ballots.

The meeting ended with a discussion on the intended use of the Slate’s discretionary fund, which will mostly be focused on subsidizing the steps that the University and Student Government will be taking with regards to mental health, diversity, and inclusion.