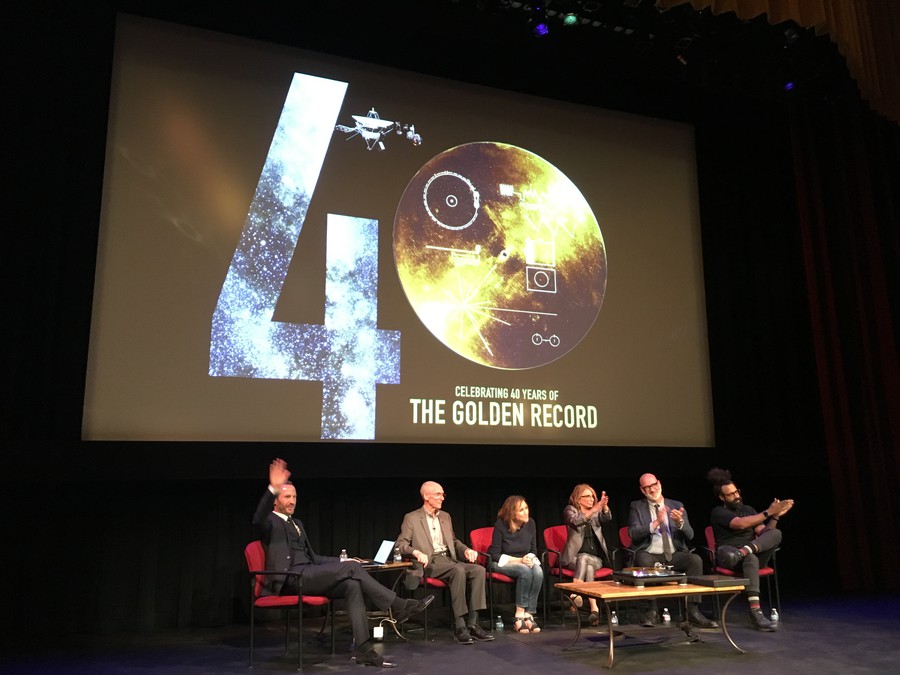 A panel at Cal Tech commemorates the Golden Record with speakers such as the project scientist Ed Stone (left) and "Interstellar" producer Lynda Obst (center right).

Courtesy of Biliana and Marina Grozdanova

In celebration of the Voyager Golden Record’s 40th anniversary, sister filmmakers Biliana (A.M. ‘11) and Marina Grozdanova (A.B. ‘13) launched a documentary series exploring the musical cultures of the 27 tracks featured on the record.

Sent into space aboard both Voyager spacecrafts in 1977, the Voyager Golden Record contained various sounds and images intended to display the diversity of life and culture on Earth. Featuring music from around the world and across time, the 27 songs on the record are meant to serve as “musical representations” of human civilization for any potential extraterrestrials to discover. The musical selections included classical music, folk music, and—most memorably for the Grozdanova sisters—a folk song from Bulgarian artist Valya Balkanska, a song that the sisters often heard as children growing up in Bulgaria.

“It’s a story that every Bulgarian knows,” Biliana Grozdanova explained. “There’s a great sense of national pride in knowing that your country’s music was chosen to be sent into outer space. In fact, a lot of the smaller countries showcased know about the Golden Record, but most people in America aren’t even aware of its existence. It just goes to show the saturation of pop culture here.”

The Grozdanova sisters’ documentary series, entitled Golden Tracks: Music Aboard the Voyager, will be produced by El Jinete Films, the independent production company the sisters founded in 2012. The series aims to demonstrate the importance of preserving and investing in our planet’s culture. It will be divided into eight episodes, starting with The Old New World (featuring Native American music, blues, jazz, and rock ’n’ roll) and concluding with Eurasia and Eastern Europe (featuring Azerbaijan, Georgia, and Bulgaria). With the Golden Record functioning as a musical gesture to other life forms and connecting us to our cosmic neighbors, the Grozdanova sisters hope their series will function as a cinematic gesture, prompting viewers to become cognizant of the global issues concerning the cultural regions represented on the record, and to thus become better neighbors to one another here on Earth.

“Twenty-seven songs from very distinct cultural backgrounds are grouped together almost randomly on a disc—but it is not random, because we are not living randomly together on this Earth,” Marina Grozdanova said. “We are all neighbors, and our stories link to form a very long chain—or track list, if you will—and we have to remember to engage as global neighbors every day by listening to one another as a collective human race.”

Exploring the musical cultures associated with each of the 27 songs on the Golden Record, the sisters will travel to various locations around the world to film and record original renditions of the songs with local musicians. During this process, they will learn about the musicians’ respective customs, cultures, and homes in order to document the lives and struggles of the people behind the music. Although the campaign for the documentary series only recently launched in September, the sisters have been working on this project for over two years now and have already developed storylines for five of the 27 songs. This year alone, the sisters have recorded the Preservation Hall Legacy Band performing Louis Armstrong’s “Melancholy Blues” in New Orleans, filmed Tony Redhouse performing his variation of the “Navajo Night Chant” in Arizona, and even interviewed Balkanska in Bulgaria.

To make further progress on the project, Marina Grozdanova recently moved to Tokyo to conduct research on the songs from East Asia, Southeast Asia, and Oceania that are on the record and will be featured on the fifth episode of the series.

“Moving to Japan was a bold move, but I knew it was right for me personally, as well as for the project,” Marina Grozdanova said. “How in the world are we to find local musicians if we are not going to all these places? One thing is to write e-mails and to try and envision the international scope of the project in your mind, but once you make a move, a big move, you really feel like maybe you can do this, because you have expanded your mind, your body, and your possibility for experience.”

Campaigning under the pledge “$1 in the name of science, music and preserving our culture,” the Grozdanova sisters launched a Kickstarter campaign in conjunction with Kickstarter’s Projects of Earth Initiative to try to achieve the $175,000 budget required to properly complete the project. Proceeds from the Kickstarter campaign will primarily go toward funding travel expenses such as airfare, visas, and vaccines, but also toward financing additional equipment, location rentals, and compensation for the crew and performers. Principal photography for the series will begin in early 2018 for approximately 15 months.

“We want to spend three to four weeks at every location in order to really get to know the place and follow the characters in depth. We’re trying to develop this project as holistically as possible,” Biliana Grozdanova said. “Most of all, we just want the series to do absolute justice to Carl Sagan and the entire Golden Record selection committee. We’ve done music documentaries before, but this one hits close to home, and as such, it is our most ambitious project yet. Like Sagan, we’re setting our bar high and reaching for the stars.”

For more information about the Golden Tracks project or to donate, visit eljinetefilms.com.