Rose and the Readymades: Campus Author Talks the Art of the Novel 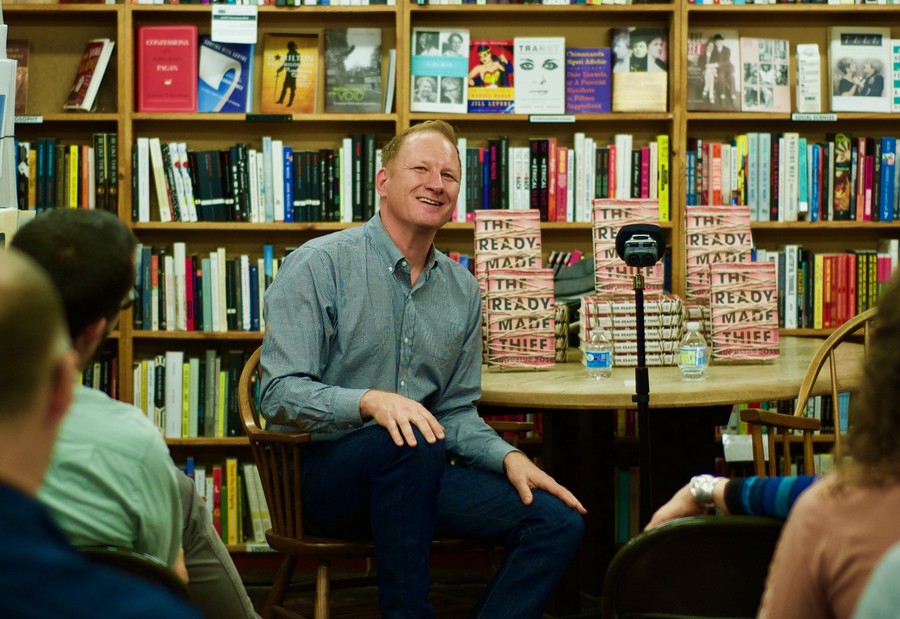 Augustus Rose is an author, screenwriter, and lecturer in Creative Writing.

“He totally changed the landscape of art,” Augustus Rose said of Marcel Duchamp, the inspiration behind his new book, The Readymade Thief. At 57th Street Books on Thursday evening, Rose, a University of Chicago lecturer in fiction, discussed his novel, the focus of which is main character teen-runaway Lee Cuddy, and her exploration of the seedy underbelly of Philadelphia with homeless kids, hackers, and secret societies.

To kick off the event, Rose’s friend and coworker Rachel DeWoskin, a fellow University of Chicago lecturer, introduced him. Rose then gave a brief reading as the audience members listened enthralled as the words were spoken from the page.

DeWoskin and Rose proceeded to discuss his writing process up to his finished work. He gave the audience a sneak peek into his early drafts by explaining how the idea for the book came from the artist Marcel Duchamp’s “readymades,” and how Duchamp was originally the main character in The Readymade Thief. Rose admires Duchamp to the point that he makes his own versions of Duchamp’s artwork, and brought an example of this to show the audience. Rose stated that he became especially fascinated with Duchamp when he noticed how the other artist’s pieces come together.

“The more I studied his work, the more I realize there is an interconnectivity in his work.” Rose explained.

The more he worked on Duchamp as the main character, the more he noticed the limitations of writing a character based on a historical figure. With Lee, entirely original, there were no limitations.

The Readymade Thief is often referred to as a thriller, though it crosses into other genres. The book brings the reader through Lee’s world as she journeys through abandoned urban landscapes, feeling trapped. Along the way, she meets artists and hackers, squatters and fanatics, all of whom believe she holds the key to a sinister plot. A suspenseful narrative filled with cliffhangers, the plot is a labyrinthine puzzle, much like the abandoned buildings and tunnels Lee and her friends scope out. Melding all these different themes and ideas took time; finishing the first draft took a year and a half.

The next part of the event focused on Rose’s journey toward becoming an author. In early adulthood, he faced constant rejection from publishers, causing him to switch gears and write screenplays. His history with rejection and years without publishing is a far cry from the quick and intense sale of The Readymade Thief. There was an auction between many publishing companies for the rights to the novel, a rarity in the publishing world nowadays.

The audience asked questions eagerly, probing Rose’s creative process. Rose revealed that he finds novels more engaging to write than screenplays, because a writer can describe and learn more about their characters. He enjoys “entering the inner life of a character that deeply,” and feels that it is easier to do so through novel-writing. In parting words, he said he hopes to replicate the effects movies have on people though his writing.