The Smart Museum has five new galleries and a sculpture garden this fall.

By Meghan Ward   and Zoe Bean

This fall, in addition to its sculpture garden, the Smart Museum of Art is home to five dynamic new exhibits which range in subject from historic themes (Revolution Everyday), to current political topics (Welcome Blanket), from the emotional (The Hysterical Material) to the more concrete (Conversations with the Collection), and of course, including a nod to the Chicago community (Radical [Re]constructions).

Revolution Everyday marks the 100th anniversary of the Russian Revolution. The exhibit showcases some of the posters and videos meant to illustrate common life for people living during the revolution. The posters feature praise of workers and pro-Stalin iconography. “The exhibit was designed to reveal the nuance of what it felt like to live in Russia, particularly the experience of women,” said Michael Christiano, Senior Director of Museum Programs at the Smart Museum. The exhibit specifically focuses on the experience of women in 1917, with most of the posters depicting working women being empowered by the social change brought about by the revolution. One poster shows a smiling working woman holding a mop and bucket, another a woman working in a factory looking up and smiling, her hair back in a red bandana. The propaganda was designed to convince women that the revolution would bring about better working and living conditions. 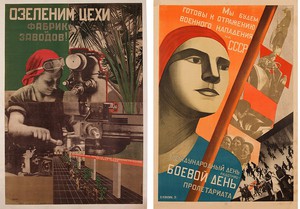 “These posters are projecting a shared way of life to viewers: a way in which you were supposed to look at everyday life,” Christiano said. “There’s a complicated tension because in many ways the message was uplifting, but it was also kind of prescriptive for women at the same time.”

“Hysterical” is a word often associated with humor, but it actually refers to extreme emotion, whether it be elation, grief, panic, or bewilderment. The Hysterical Material, organized by sculptor Geof Oppenheimer of the Department of Visual Arts, is an exhibit that evokes that level of emotion and causes the viewer to examine how we as humans express our inner turmoil, and how art can express the resulting actions. Christiano described the exhibit as “thinking about the human form and the body as both subject and material tool.”  Accordingly, it counters striking works of sculpture including those of Auguste Rodin, with photography and other two-dimensional work, notably a fascinating series of screen-prints by Bruce Nauman (on loan from the San Francisco Museum of Modern Art). Butter-yellow walls complement the monochrome exhibit and harmonize with the playful nature of the screen prints. Though superficially calming, upon closer examination, it is a vibrant take on the expressive capabilities of the human form. 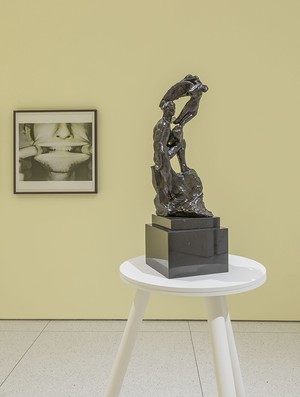 Many of the exhibits on display at the Smart Museum feature “serious” themes, but there is something to be said for art for the sake of art. The Hysterical Material allows the viewer to draw conclusions that can be applied to any discipline. Christiano reasons, “There is a deep curiosity and desire to know, through art, the world around us that permeates everything we do.”  It seems that this exhibit speaks to that desire without attempting to provide answers, as there is no text on the walls. To find out the title or artist of a piece there are small diagrams of the exhibit featuring pertinent information allowing the eye to wander rather be drawn to a word or phrase. While this exhibit does not exceed in physical size, it provides spacious room for interpretation.”

Radical [Re]constructions, by Emmanuel Pratt, is the first exhibit seen upon entering the museum, occupying the museum’s lobby. This choice is in keeping with the welcoming nature of the installation piece. One is immediately greeted by a lifelike wooden facade that mimics the front of a real house, located in Perry Avenue Commons on the border of the Washington Park and Englewood neighborhoods. It’s currently under renovation by the Sweet Water Foundation founded by the artist which, according to its website, “creates safe and inspiring spaces and curates healthy, intergenerational communities that transform the ecology of once-blighted neighborhoods.” The foundation incorporates a wide variety of activities in its practice, as shown by Pratt’s elevation drawing which creates a diagram-like view of what’s going on in the house: cooking, art making, aquaponics, and raising tilapia fish. Christiano describes the piece as “thinking about how to take that place and represent it in the context of this museum.” The drawing reads as a life-size blueprint, letting the viewer in on the vision of the founders of the Sweet Water Foundation, watching a community materialize as Pratt did. The museum has used the question of how to represent this dynamic space as a chance to “transcend space and geography” and “animate this space as a site of culture.” 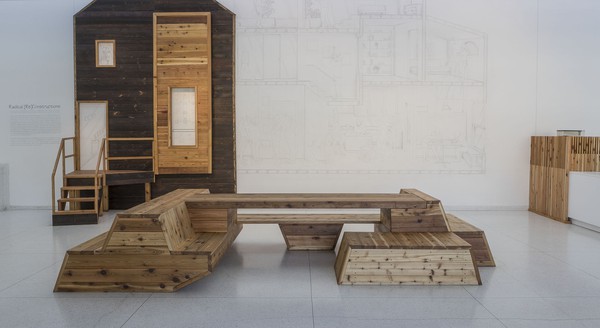 When prompted to speak about how the Smart Museum engages with the community, Christiano responded, “We look at how every project can help us engage with our publics across campus and our broader community.” This level of care has certainly been taken with Radical [Re]constructions. The second part of the installation is a table piece with a built-in bench, which creates opportunities for a variety of uses through its unique shape. Christiano expressed how the exhibit created the opportunity to “sit in this public space, amongst or within the art.” As the South Side community is the greater subject of the piece, sitting in the installation makes one feel that she has become a part of the piece itself, or at least prompts one to examine her role in her own communities, be it the University of Chicago, Hyde Park, or the greater South Side.

The exhibit Conversations with the Collection focuses the theme of belonging. It features art of all kinds, from paintings to tables to dining room furniture designed by Frank Lloyd Wright, with each piece exhibiting a sense of community and home. “We were asking questions about how the built environment shapes our experience of the world, and how we shape the built environment,” Christiano said.

The Frank Lloyd Wright furniture set, with its straight, geometric lines, provides a more rigid, though not entirely unwelcoming, portrayal of a home. Meanwhile, a painting depicts people crowded around a woman as she cuts into a plate of food, showing the connection between home and belonging to be tied to the familiar act of eating dinner with family. 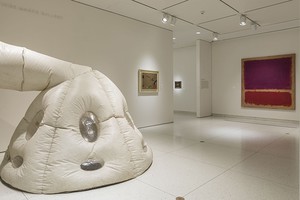 By organizing the collection around a central theme rather than a time period or artistic style, the collection features widely varying textures, colors, and materials. The result is a realization that many different artists can express similar messages through almost any kind of medium.

Finally, the Welcome Blanket exhibit further shows the museum’s dedication to addressing current political issues through art. The exhibit is a room where the walls are covered in colorful knitted blankets. Each blanket is unique, with some featuring intricate geometric patterns, and others showcasing a rainbow of colors. The exhibit was a response to the divisive atmosphere created when then-presidential candidate Donald Trump announced his intention to build a wall along the United States’ border with Mexico. It was created by Jayna Zweiman, co-creator of the “Pussyhat” movement, to protest Trump’s controversial comments about women. The movement encouraged women to knit pink “pussyhats,” hats with cat ears, in defiance of Trump’s comments. Similarly, the Welcome Blanket exhibit is defiant of Trump, whom many have accused of alienating refugees and immigrants with his rhetoric. “Zweiman was thinking about what could be a comparable gesture of love and warmth to the wall, a very physical gesture of division. That’s how she thought of blankets,” Christiano said. 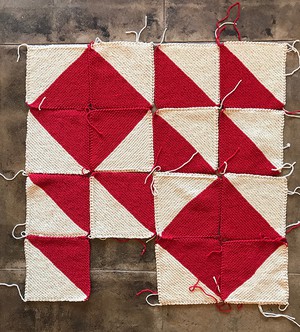 The museum invited people to create and send in blankets to show support for immigrants and refugees seeking resettlement. “We’ve received 1,700–1,800 blankets from all over the world,” Christiano said. “It’s been a really encouraging gesture of warmth and compassion that sits alongside a lot of the divisiveness you hear in the media. It’s also a little bit like a longer form of a knitting circle.”

The exhibit even has a small room with knitting needles and yarn balls of multiple colors for any visitor who wants to add to the collection. This is one of many parts of the museum emblematic of how Smart Museum combines appreciation for art with active engagement of its audience.

Though they vary widely in subject matter, each new exhibit at the Smart Museum showcases inventive and unusual art. With some showing innovative visual takes on certain emotions and sensations, and others providing direct ways for audience members to interact with the art, the exhibits have something to offer for everyone.