75 students took art home through the Smart Museum's Art to Live With program. 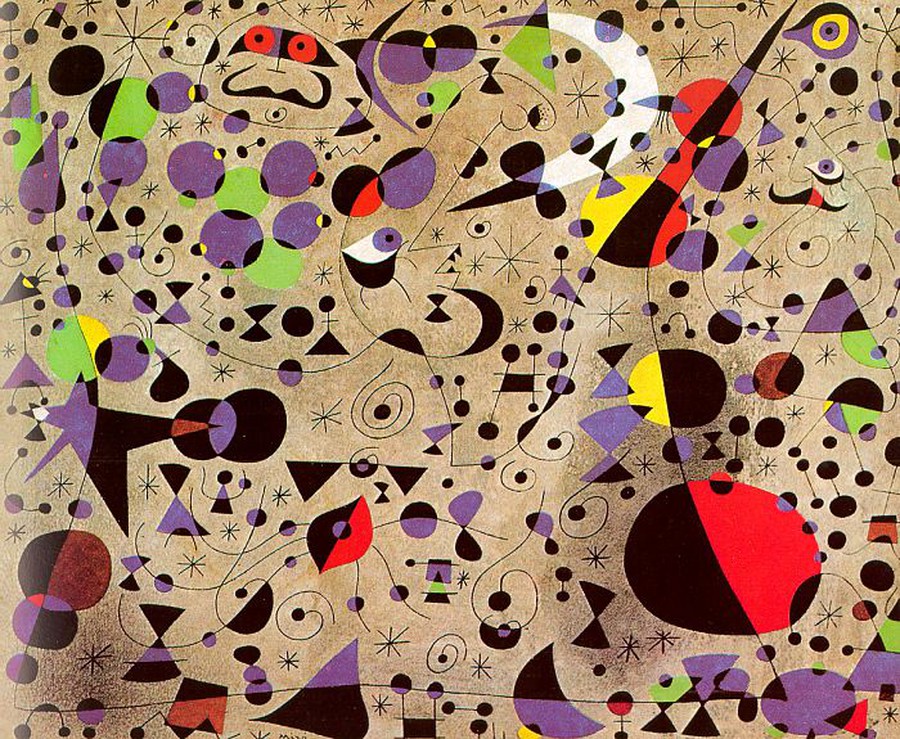 At 8 a.m. on October 1, 75 sleep-deprived yet eager students entered the Smart Museum of Art one by one to select a piece of artwork from the Museum’s Art to Live With collection. Once inside the gallery, students had one minute to choose the work—be it a Miró or a Chagall—that will hang on their walls for the next seven months, becoming a staple of their rooms and lives.

Art Match, which made its much-anticipated return after decades of hiatus, is a University of Chicago tradition that began 60 years ago. All of the artwork in the collection belonged to University trustee Joseph Randall Shapiro (X ’34), who began assembling the works in 1958. Back then, students rented the artwork from Ida Noyes Hall for one dollar per quarter. The program, which became one of the first university art rental programs in the country, reflected Shapiro’s belief that “the best way to become acquainted with art—and to appreciate it—is to live with it.”

According to the Smart Museum’s Campus and Public Art intern Harper Graf, 28 of the 38 undergraduate houses participated in the program this year, and 87.5 percent of all residence halls have at least one person who received art.

The Maroon interviewed six students who waited in line and returned home with artwork. 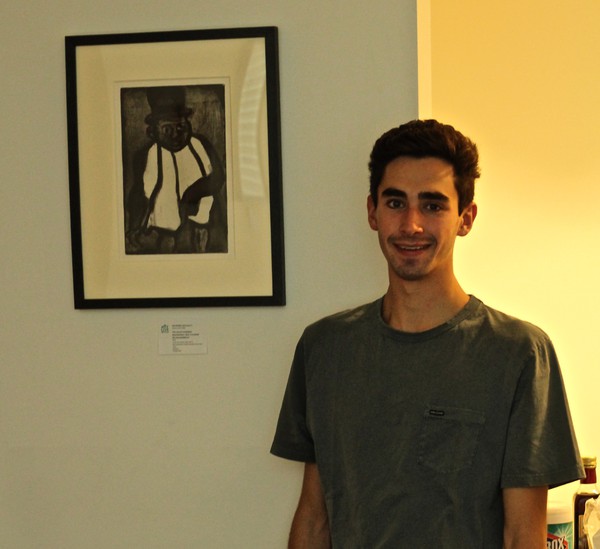 “My roommate and I were around 66th and 67th in line, and there were pretty much just etchings left at that point,” Mandel said. His roommate, Aaron Holman, chose Rouault’s “The Colonial Official.”

“We chose these two because we thought they worked well in dialogue with each other,” Mandel continued. “They’re from a series that parodies a racist play and calls attention to the inherent racism of it.”

In the future, he hopes that the Smart Museum will expand its Art Match collection. “Not all art is created equal,” he explained, pointing to the competitiveness of the initiative. “I think the Smart Museum should add more contemporary abstract art by more local artists to the selection. That would definitely remove a lot of the program’s commodity aspects.”

The etchings have inspired additional creativity: The roommates taped a series of Matisse cutouts on the wall and tried to make a CTA map out of paper on another wall. “The etchings have kind of shaped the way we approach the public space. It feels a little more sacred, like it’s ours.” 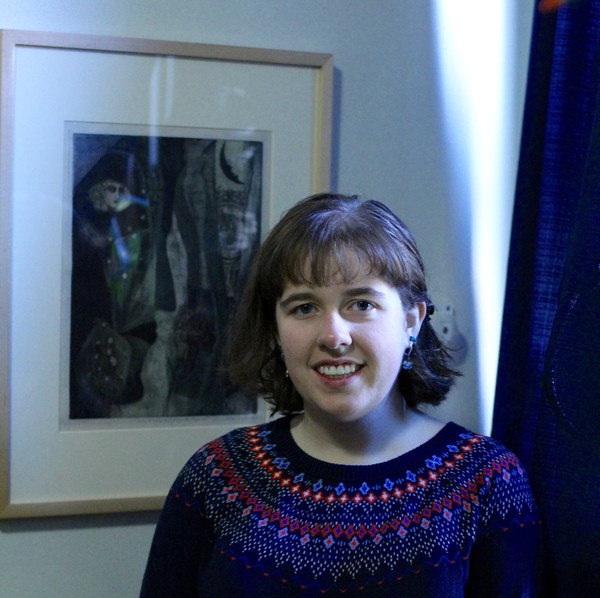 “We were walking back from something at 1:30 a.m. and saw that there were 40 people in line already,” Ring recalls. “So we came back to BJ, grabbed a sleeping bag, and went back out there at around 2:30 a.m. By then, we were around 50th in line.”

“This [piece of art] really stood out to me because it’s an etching, whereas most of the other artworks were lithographs and limited-edition prints,” Ring explained. When deciding which piece to choose, she said that she prioritized the visual aesthetic of the artwork rather than the name of the artist, since she knew she was going to be looking at it often. “You can see the actual pencil signature at the bottom, which I found really cool,” Ring said.

Ring’s single in BJ is already decorated with lots of artwork, but her new addition from the Smart Museum does not go unnoticed. “The way it’s placed really makes it stand out,” she said. “It’s kind of a different style than the other art in my room, and the more I look at it, the more things I notice.”

Noah Adams, First-year, Global Studies
“The Dream and Lie of Franco I (1937)” by Pablo Picasso 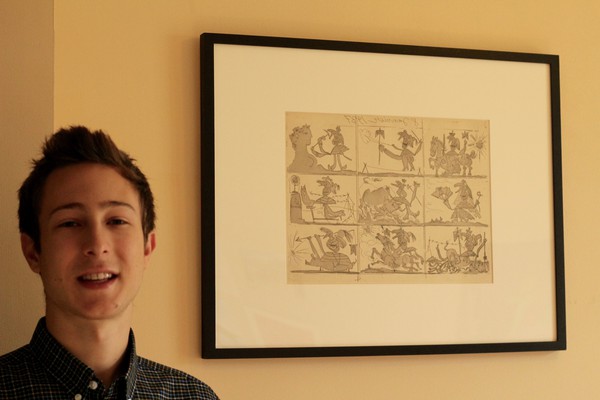 “When I saw that there was no one there, I decided that I had to stay,” Adams said, who was the first to arrive at the museum for Art Match and the first to choose a piece from the collection. “I called one of my friends, who brought me a pillow and a couple of blankets. I knew I was just going to camp out.”

“Lots of the Miró works sort of looked the same to me, whereas this one looked more unique,” Adams said about his Picasso piece. “I’m really into sketches, and although this isn’t a sketch, it reminds me of a challenge I did where I sketched random things every day for a year.”

The grayscale etching, which is divided into nine sections, indeed has a sketch-like quality to it. “Without the white border, it would have looked like part of my wall,” Adams joked. “This was produced in the same year as ‘Guernica,’ so it has some of the same undertones,” he added. “The same bull is in there.”

“The next morning, I got the flu, so I missed all of second week,” said Adams, who got around two to three hours of sleep that night. “But it was worth it.” 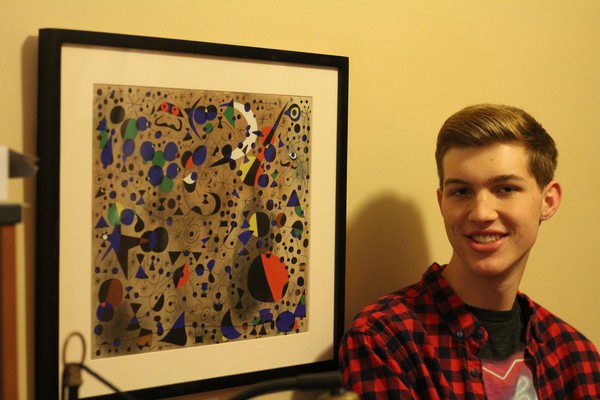 “It was between this and the Picasso, and Noah got the Picasso,” Langford said about his Miró piece—one of several that were claimed within minutes. “I wasn’t actually totally sold on either, so Noah made the decision for me.”

“I was glad that they brought the program back after decades,” he said. “It’s really a rare opportunity.” His piece, which he calls “the focal point of the room,” has attracted many visitors (helped by the fact that his neighbor also has a piece of art from Art Match).

Langford, who had originally planned to start lining up at 4 a.m. on the morning of Art Match, was walking past the Smart Museum the night before when he saw that Adams was already there.

“There wasn’t much going on that Saturday night,” remembered Langford, who promptly joined Adams in front of the Smart Museum. The two bonded over being the first people in line, among other things. “We’re both Eagle Scouts, so we talked about that for a while,” Langford said. “And he’s also in my calculus class.”

Anthony Brooks, First-year, Undecided
“The Sinking of the Cumberland by the Ironclad Merrimac” by Currier and Ives 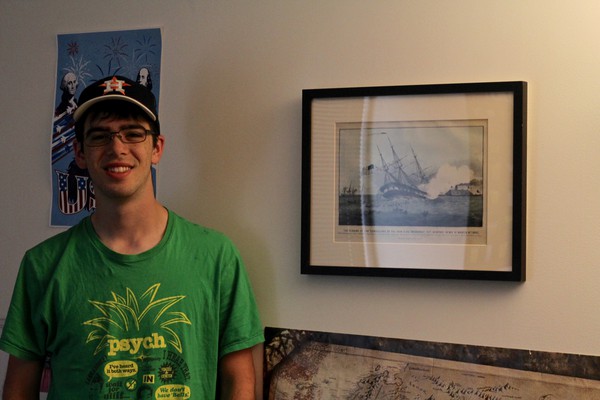 “What’s cool about this one is that it’s a lithograph, which is like a poster before posters were mass-produced,” Brooks said. Brooks, who went to the Smart Museum at 1 a.m. after looking down from his house lounge and seeing people already in line, said the piece stood out to him, because he is a “history nerd,” and the artwork is a piece of Civil War propaganda.

“The U.S. ship being sunk here is still the focal point of the painting,” he explained. “It’s gallantly firing off cannons and its flag is waving to make it look good, while the Confederate ship is sinking off to the side and has flags that are notably smaller.”

“The ship is called the ironclad Merrimac but the Confederacy renamed it the Virginia when they seized all the Confederate ships in the South, but Currier and Ives still called it the Merrimac as a way to discredit the authority of the Confederate states to seize ships and rename them.”

Although he learned most of this from a textbook, seeing the artwork in person—and living with it—gave him an understanding of it that a book could not. 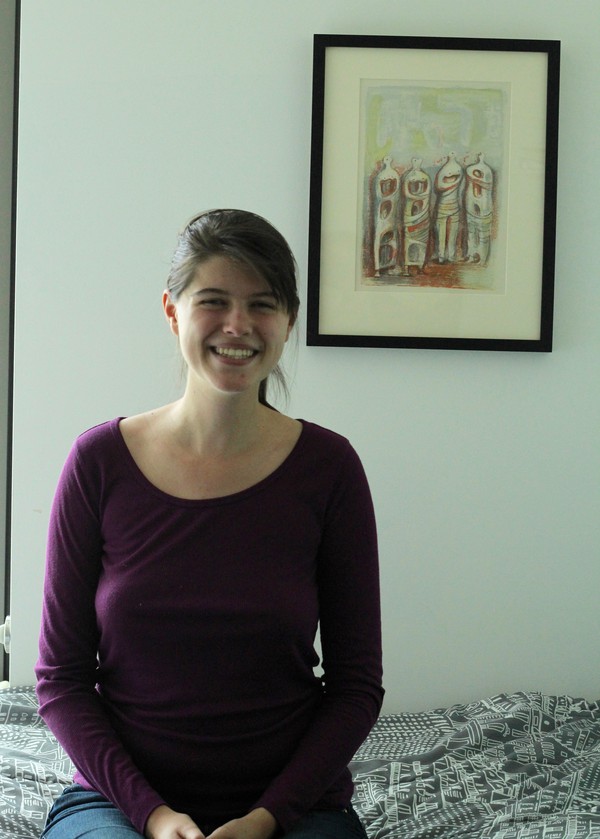 “This was my first choice, so I was very excited to get it,” said Kuchnir about her Henry Moore painting. “It was a really fun vibe at the all-night waiting party,” she continued. Kuchnir, who arrived at the Smart at 1 a.m. and was around 40th in line, explained that each new person who arrived at the museum had a number written on their hand, so they did not have to form a strict line. Instead, people could form clusters outside the museum doors.

“My residents and I watched a comedy special on Netflix together,” added Kuchnir, who is a resident assistant of Yuen House. “A friend who doesn’t even live in housing came to wait with me.”

Kuchnir first became interested in Henry Moore’s artwork after seeing his Nuclear Energy sculpture outside the Max Palevsky Residential Commons during her first year. “Since then, I’ve been a big fan of this work,” she said, adding that she was excited to learn that the Smart Museum was offering four Moore pieces for Art Match.

“I wanted to be able to see it first thing when I walk through the door,” said Kuchnir, who positioned the painting directly above her bed. “It makes me happy every time.”