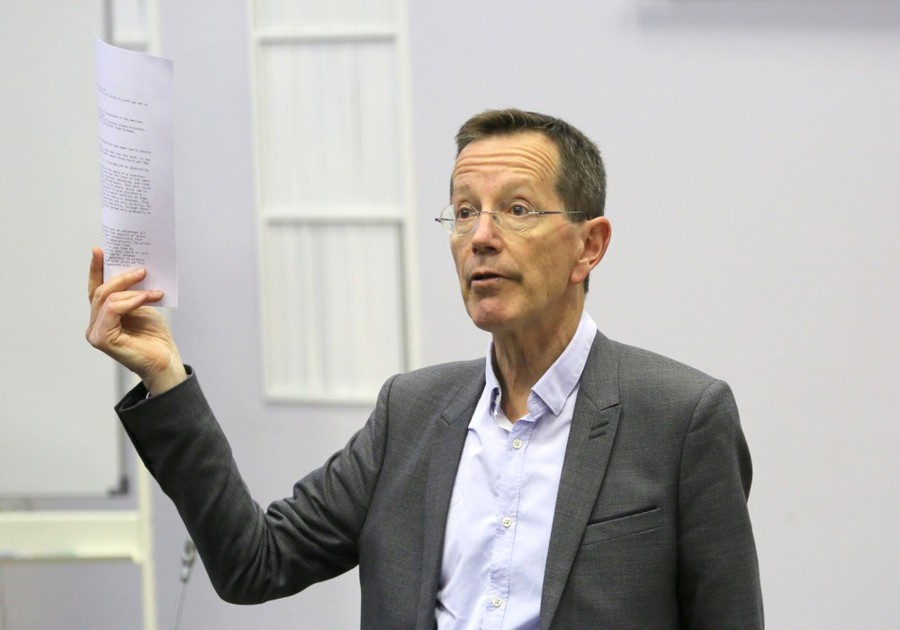 Courtesy of The Russian Presidential Academy of National Economy and Pub

Alain Bresson, a distinguished professor in the Classics and history departments, won the American Historical Association’s James Henry Breasted Prize for 2017 in recognition of his 2016 book The Making of the Ancient Greek Economy: Institutions, Markets, and Growth in the City-States.

In light of his work in the Classics and history departments and at the Oriental Institute, the Breasted Prize highlights an already diligent and committed career. The Maroon met with Bresson to learn more about his research and the work put into the award-winning The Making of the Ancient Greek Economy.

He said he didn’t plan to end up at the University of Chicago. Growing up and attending university in France, Bresson learned of UChicago while looking for French and American university exchange programs. “Chicago was not completely chance,” Bresson said. “I had to sort the universities I would apply for, and I put Chicago first.”

Beginning as a guest professor in 2005 and becoming a full-time professor in 2008, Bresson deeply connected with the University of Chicago’s interdisciplinary practices.

“You have to maintain excellent scholarship in our field, which I try to do…publishing documents, publishing inscriptions, publishing coins, or working in papyri. But we must move beyond this barrier of technical approach and have a bigger picture.”

Bresson is not suggesting a definitive methodology to approaching historical research, but believes that while history forces one to ask about chronology and evolutionary phases, these considerations should not be the only aspects of historical research.

He referred to a class in which his students looked at the economies of Mesopotamia, Egypt, and the Roman Empire as an example. Rather than drawing conclusions based on the societies’ interconnectedness, the students analyzed the economic frameworks of each society through their differences.

He believes that one must be careful when comparing histories of differing time periods. When asked about the danger of correlating a period of history to past and future time periods, Bresson presented the example of taxes within the framework of ancient economics.

Bressen stressed that the meaning behind these calculations are complex, and that making conclusions from direct comparisons of disparate time periods can prove wildly incorrect.

Bresson went on to describe the problems of direct comparison deduction with one of the most contentious questions of ancient history: how did the Roman Empire fall?

It may be easy to assume, he argued, that a fragmented Mediterranean world had less economic growth than when under the Roman Empire due to assuming beneficial outcomes of unification from lowered transportation costs, easier trade, and a greater circulation of ideas.

While each of these did occur, their impact on economic growth did not outweigh the less obvious economic consequences brought upon the region by the empire. “When there was unification there was no pressure. The State and the elite around had no more rivals, so they could do whatever they wanted, and we observe that the social inequality grew,” Bresson said.

Additionally, unification under the Roman Empire complicated the meaning of citizenship. Before unification, Romans lived in Rome, Greeks in Greece. Now, citizenship was given to everyone in the empire, eliminating the meaning and status previously associated with citizenship.

The lack of nationalism in the Mediterranean satellites acquired by the Empire gave little incentive for the individual economic gains of these newly annexed groups of people, dissipating economic growth.

“We are constantly dependent on these [Athenian] documentations. But now, if we want to move further, beyond Athens, what do we do? For many cities we know only the name. They have not been excavated somewhere in the Black Sea, Asia Minor, or Italy,” Bresson said. So, what can be done?

In Bresson’s case, coinage became paramount in his study of ancient economies, as coins act as one of the few remaining artifacts of these otherwise lost cities. “When you work in economic history, you work inevitably with money and having money kept as a record,” Bresson said. “I’m not interested in publishing [articles about] coins per se, but I am interested in the policies that developed.”

While coins provide an integral starting point, the deduction process required to come to conclusions regarding ancient societies’ economies requires scrutiny, time, and care. Even then, conclusions may be challenged, but Bresson feels that is a necessary part of the field too.

“If you make a mistake, you have colleagues that will point to your mistake, which is extremely good,” Bresson said. “I like to have debates when they are honest.”

As a historian, the scope of one’s work inherently contains awareness of a narrow piece of the whole picture and no two historians will read a piece without bringing their unique experience and knowledge to challenge the conclusions of the author.

Bresson embraces this fact of the field.

“Truth is there. It is nowhere in the sky. Truth is debate. It’s free debate. Freedom of speech, freedom of debate, it’s fundamental. If we suppress that—forget everything we started with. There is no such thing as truth that can exist independently from us. Truth is a construct, but that doesn’t mean that it’s nothing—far from it, just like friendship.”