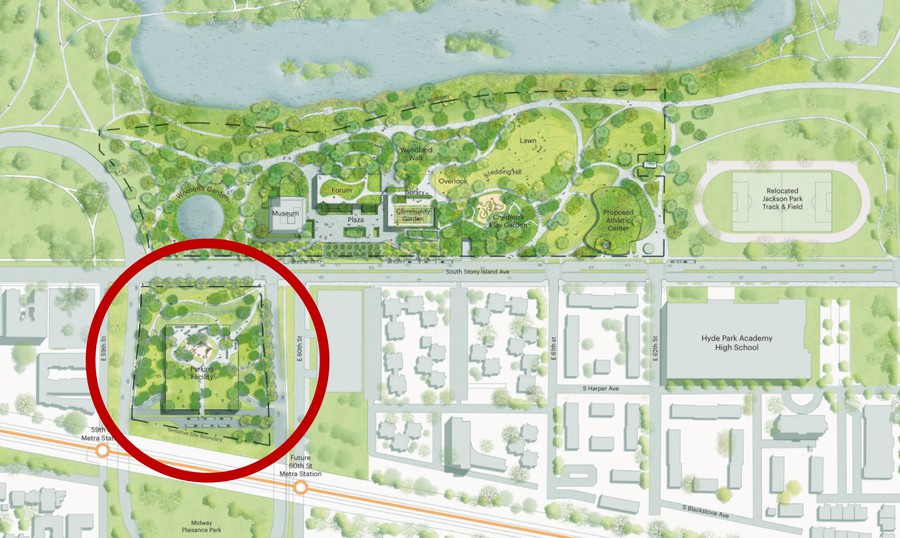 Community organizers opposed the Midway site. Then a head architect said the plan was being reconsidered. Now the Foundation has invited key stakeholders to a private meeting for updates.

Courtesy of the Obama Foundation

Update (12/20): The Obama Foundation confirmed the event in a press release Wednesday evening, saying that Foundation officials will focus on “on the above ground parking solution.”

“The Foundation will highlight the opportunity to increase foot traffic in the surrounding area and create more usable parkland in an underutilized section of the Midway. Foundation representatives will also highlight the changes that have been made to the initial parking proposal that was presented in August in response to feedback from the community, including:

·         Creating park space that is more restorative and less active;

·         Moving bus staging from the Midway to Stony Island in a way that does not cause congestion along Stony Island;

·         Disguising much more of the parking functionality with additional landscaping around the site to further camouflage the structure.

·         Elevating the Cheney Goode memorial to a place of prominence.

The Obama Foundation will meet privately on Wednesday with about 50 parties to discuss the parking plan for the Obama Presidential Center (OPC). Community organizers had opposed the Foundation’s plan to build a parking garage in the Midway Plaisance park, which led the Foundation to reconsider the plan.

The Chicago Sun-Times obtained the invitation letter from Obama Foundation VP of Civic Engagement Michael Strautmanis. In the letter, Strautmanis said: “As 2017 comes to a close and we look forward to the next phase in our process, we would like to invite you to join us for an important conversation regarding the proposed parking plan for the Obama Presidential Center.” The meeting will be held at the Foundation’s Hyde Park offices in Harper Court.

Plans for the OPC have been met with opposition from various members of the community, and the parking garage has been a particular point of contention. Some community organizers who are pushing for a community benefits agreement have highlighted the parking garage as a priority in order to allow residents to benefit more from the developments. (The Foundation itself has opposed signing a CBA, preferring to work through dialogue.) Other community groups such as Save the Midway have argued against the appropriation of parkland for the garage. On their website, the group argues that “It is imperative to preserve natural spaces that take into account bird migratory patterns, wetland areas, existing flora and fauna…[to] ensure that parks are the restful, restorative, reposeful areas that are necessary to escape urban stresses.”

The parking garage plans were announced last August by the Obama Foundation, along with plans for an adjacent park. In a press release, the Foundation said the proposal would support the goals of the OPC by “stimulating the streets around the OPC with increased pedestrian activity…. [The proposed developments] are designed to unlock the full potential of Jackson Park as a recreational destination.” In November, it was reported that the Foundation was considering shifting the site or design plans of the garage.

The Sun-Times reported that Save the Midway co-chair Michael McNamee will attend Wednesday’s meeting. He told the paper he would “listen and report back.”

Current plans for the Center have the parking garage located on a city-owned patch of land at the end of the Midway, along Stony Island Avenue between East 59th and East 60th Streets, east of the Metra tracks.