Sales Up at Sem Co-Op 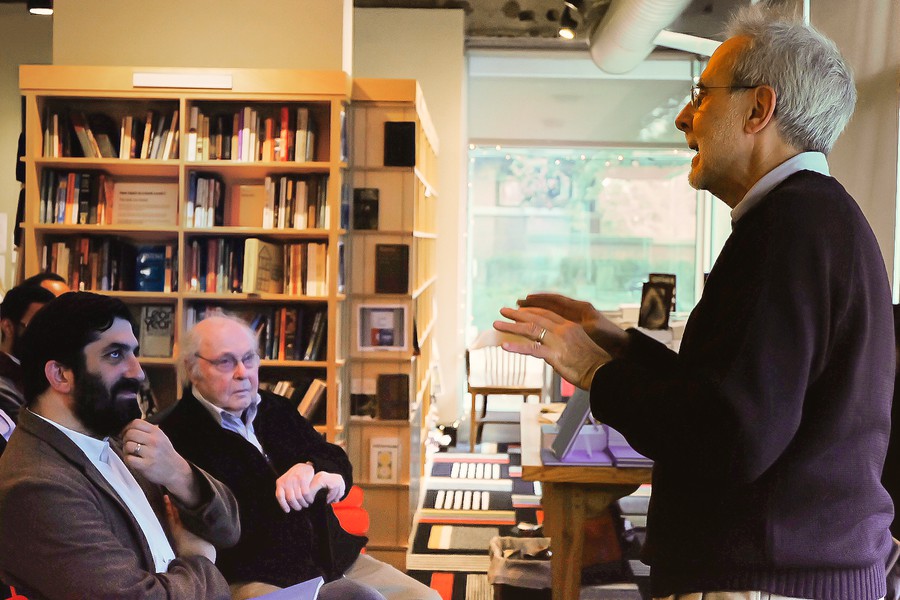 At an event last year, the Co-Op's current director listens to Jack Cella, his predecessor discuss the Co-Op's history.

An increase in sales revenue to over $3 million in its 2016–17 fiscal year at the Seminary Co-Op did not prevent another substantial operating deficit, though the bookstore’s leadership hopes that additional investments will continue to improve the health of the Hyde Park institution.

The Co-Op’s shareholders gathered Monday night for their annual meeting, where director Jeff Deutsch and board chair Deborah Epstein laid out the situation facing the bookstore.

“There is quite a bit of good news, and, despite the continuing struggles, I do want say that the good news is a direct result of your overwhelming response to the calls to action that we’ve recently issued, to which you’ve responded with great passion for the beloved institution that we share,” Deutsch said.

In a difficult year for both national chains and academic bookstores, the Co-Op saw a bump in sales of more than $225,000, a second straight year of growth. Growth was especially strong in the store’s children department at its 57th Street Books location. The value of the books on its shelves also increased, a testament, Deutsch said, to the store’s “commitment to grow, not cut, our way out of the deficit.”

The bookstore ultimately lost a little less than $140,000 over the course of the year, a decrease of 55 percent from the loss the year before. As the bookstore continues to invest in new projects and programming, Deutsch said, they expect that deficit to begin to grow.

Over the course of the last year, the Co-Op launched a podcast, which combines original programming with audio from events held at the Co-Op. The bookstore also hosted or helped to put on almost a hundred more events, serving more than 4,000 more attendees.

Deutsch also reflected on the Co-Op’s purpose in an increasingly frenetic age. “The work of the Co-Op is predicated on a specific sort of slowness—not in terms of service or response to our customers, but an appreciation, a determination really, to provide and sustain spaces for intellectual curiosity, thoughtful debate, and the joy of discovery, all of which takes and rewards the investment of a certain sort of time,” Deutsch said.

Deutsch explicitly chose not to name the e-commerce giants that loom over the book-selling industry, though at one point acclaimed anthropologist and University professor Marshall Sahlins cut into a conversation about the possibility of offering e-books through the Co-Op to quip that it is “better to light a Kindle than to curse the darkness.”

The 61,000 shareholders the Co-Op had a year ago have dwindled to about 8,000, as the bookstore began applying a rule that shifted shareholders who do not spend at least $10 a year in the store into non-voting positions as charter members and started signing up new customers as members instead of shareholders.

Since some Co-Op business requires two-thirds of the membership to be present, the large number of shareholders not involved in governance sometimes proved cumbersome. This year’s shareholder meeting attracted more attendees than past meetings and comfortably filled the front section of the bookstore, but the number still paled in comparison to the number that would be necessary to take such a vote.

Deutsch encouraged shareholders who do not want to be involved in the bookstore’s governance, and newly reclassified charter members who do, to reach out to the bookstore’s leadership to change their status.

Deutsch said the bookstore was awaiting advice from lawyers on how the Co-Op could abandon Washington D.C., where it was incorporated in 1961, in favor of reincorporation in Illinois, possibly as a not-for-profit. Deutsch said he hoped to complete the process in 2018.

The shareholders present also voted in six candidates for the Co-Op’s 18-member board. Artist and professor Theaster Gates, political science professor William Sewell, English professor Kenneth Warren, and Epstein were re-elected to the board. Erin Adams, a professor in the Department of Biochemistry and Molecular Biology, and Elizabeth Kirby, the chief of school strategy and planning for Chicago Public Schools, took seats on the board for the first time. Jack Spicer, an active resident of Hyde Park and a long-term member of the board, moved into an emeritus position.

The meeting’s minutes will be available on the Co-Op’s website.

One member worried that the previous town hall meeting on April 17 was not accessible to enough members because it was during a workday and not publicized enough.