University Symphony Reckons with Monuments Past 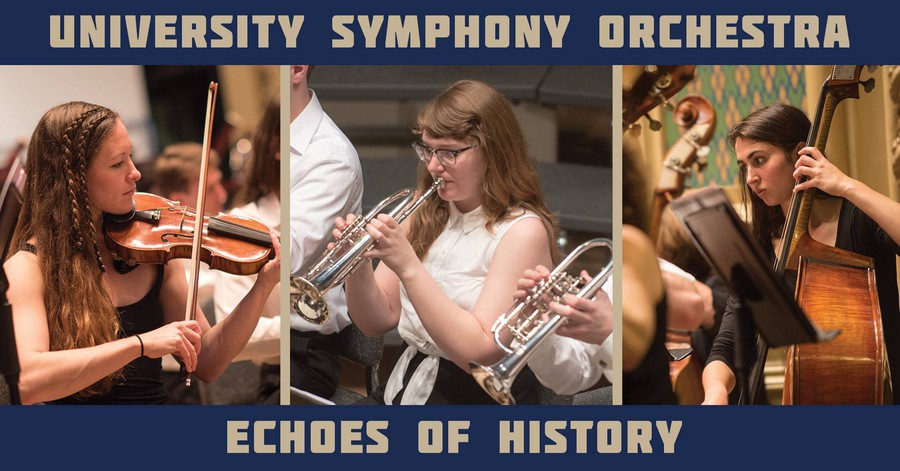 To commemorate the 75th anniversary of the first nuclear chain reaction at the University of Chicago, as well as the anniversary of the USSR’s formation, the UChicago Symphony played a trio of pieces for its annual end-of-year concert that reflected on the implications and impacts of these world events.

The first piece performed was Eric Ewazen’s A Hymn for the Lost and the Living, written after September 11, 2001, as a memorial to those who lost their lives in the Twin Towers. It was the most peaceful piece performed at this concert, with long and sweeping melodic lines and a chorus of trumpets and french horns riding above the string orchestra.

When choosing the repertoire for the concert, Schubert tried to find pieces that captured watershed moments. “These were turning points in history,” Schubert notes. She explained that everything in her life was colored by these events and the way they overlapped with each other. Schubert remembered practicing drills in elementary school at the height of the Cold War so that she would know what to do in the case of a nuclear attack. She thus chose the hymn due to the magnitude of the 9/11 attack, and its role in shifting the atmosphere around global war.

The next piece was Krzysztof Penderecki’s Threnody for the Victims of Hiroshima, planned in conjunction with the Nuclear Series presented by UChicago. Unlike the previous hymn, it only featured the string players of the symphony. A threnody is a mourning piece, and the keening wails of the string orchestra ripped into the ears of the audience on the night of the concert as the piece captured an emotional picture of the bomb being dropped on Hiroshima. In an interview, Schubert noted that this was perhaps the most difficult piece to learn, since it does not have conventional time signatures or notations. String players slap their instruments with their hands and strike the strings with the wooden parts of their bows to properly mimic the cries of pain and rage in the song.

“I prefer young people to perform it, because they are still open to learn,” Penderecki explained in an interview with Rolling Stone Magazine, noting that it is easier to conduct younger musicians for the piece. “Some older orchestra musicians don’t want to learn anything new.”

Moreover, the conductor of this piece must abandon traditional methods of leading the orchestra. As such, the unconventional notation and techniques have its desired effect—during the concert, Schubert loomed over the screaming orchestra, clawing her hands in strange movements, a necromancer bringing the tragedy of the bomb back to life.

A counterpoint to the threnody was Dmitri Shostakovich’s Symphony No. 12 in D minor, The Year of 1917. The work, which was meant to align with the Smart Museum’s exhibit on the Russian Revolution, carries an interesting history. It is a traditional symphony with a set structure and motifs—yet it is also a propaganda song about the Russian Revolution of 1917, with patriotic USSR songs interspersed within.

However, the loyalties of the composer are somewhat murky. Schubert notes that no one is certain whether Shostakovich was coerced into writing the symphony, and that some today entertain the idea of him having hidden “coded messages” within his music to subtly express his displeasure to the Western World. The ambiguity of the piece is a source of interest—no one will ever be entirely sure how Shostakovich felt about the rise of the USSR.

The juxtaposition of these pieces was elucidated in concert by Dr. Jennifer Iverson, who introduced the threnody. While the threnody was inspired by the advent of electronic music in the West, the USSR placed a greater emphasis on folk and regional music, as a way to gain legitimacy by incorporating the cultural roots of the region. Indeed, the avant-garde and abstract threnody contrasted sharply with the thumping, state-ordered nationalism of the Symphony in D minor.

The themes and ideas captured by the pieces still have relevance today, which was the most chilling part about this concert—how prescient it is. The Nuclear Series and the Revolutions exhibit were planned far in advance, yet few would have predicted that an investigation into Russian interference in the 2016 election and an uneasy standoff with North Korea would have such immediacy in the American political climate today. While this concert was an homage to tragedies past, it can also be heard as a warning, an omen for what may come in the future.