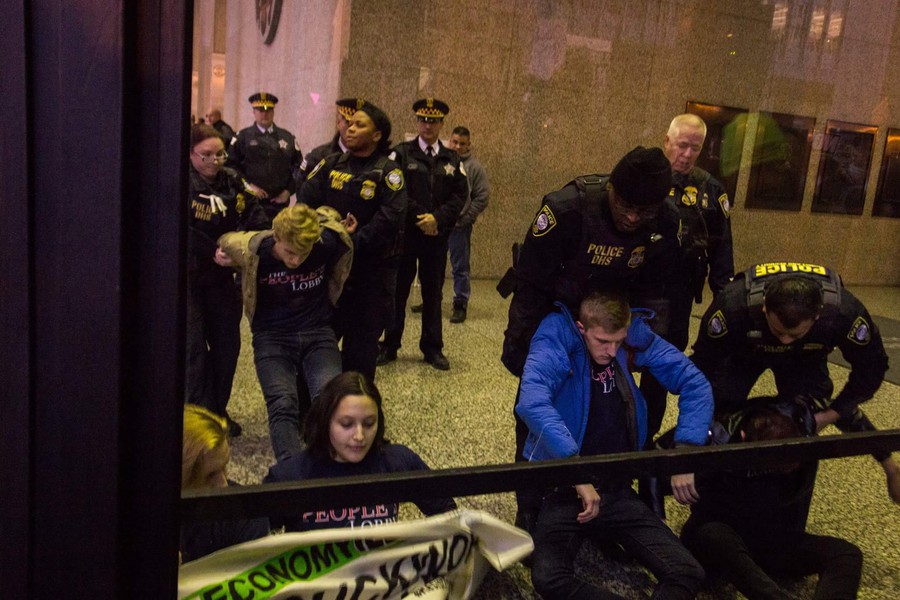 Five University of Chicago students, including the Student Government (SG) president, were arrested yesterday while protesting President Donald Trump’s nomination of Betsy DeVos as U.S. Secretary of Education.
Third-year SG president Eric Holmberg, fourth-year Tristan Bock-Hughes, first-year Simone Gewirth, second-year Isabel Bloom, and third-year Anna Wood were detained at around 3:45 p.m. along with two other individuals.
Around 500 protesters gathered outside the John C. Kluczynski Federal Building, at the northwest corner of Dearborn Street and Jackson Boulevard, for the second in a planned series of weekly rallies against the Trump administration. The rallies, called “Resist Trump Tuesdays,” are organized by Fair Economy Illinois, which bills itself on its website as “a statewide alliance that organizes urban, suburban, and rural residents around issues that affect the common good.”
Yesterday’s protest urged U.S. Senators Dick Durbin and Tammy Duckworth, whose offices are inside the Kluczynski Building, to vote against DeVos’s confirmation. A second aim, according to the event’s Facebook page, was to demand that Illinois Governor Bruce Rauner and Speaker of the House Michael Madigan increase taxes on wealthy individuals and corporations to fully fund education in Illinois from pre-kindergarten through college, including for undocumented students.
The five students entered the building’s lobby along with University of Illinois at Chicago student Joe Padilla and recent Illinois Institute of Technology graduate Jacob McCurry, carrying a banner reading “Duckworth & Durbin: Vote NO on DeVos. Free Public Education For All!” After refusing to leave, the seven students were dragged across the floor by 10 police officers and taken to two attached holding rooms in the building’s basement—one for the three female students, and one for the four males, according to Bloom. 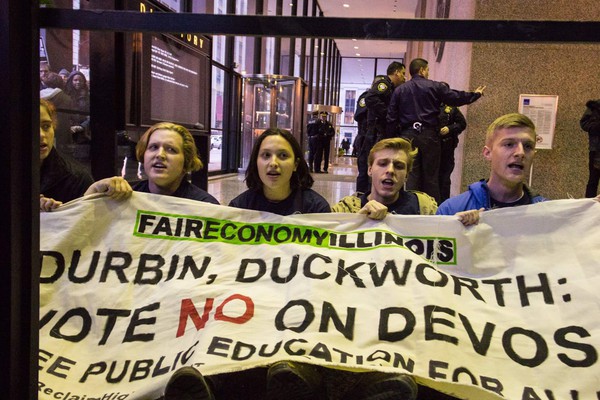 Deana Rutherford
The arrested students were released around 5:15 p.m. and charged with disorderly conduct and causing a disturbance in a federal building, according to Bloom and Holmberg. A court date is pending, and the students could be fined.
Bloom described the officers as “considerate” throughout their interactions with the students, and both she and Holmberg said the student protesters had been well prepared for the situation. None of the students attempted to resist the arrest; a photo taken during the arrests shows Holmberg going limp as an officer drags him away.
Holmberg said in an interview that he intends to continue participating in the Resist Trump rallies on Tuesday afternoons, and reiterated the need for today’s actions. “Public education is a huge part of my personal story,” he said.
DeVos is a major Republican donor and supports vouchers that would provide government subsidies for some students attending private schools. Her critics, including Tuesday’s protesters, fear that this will undercut the public school system and the separation of church and state.

Update (02/01/17): Citing these fears as well as DeVos’ ignorance about civil rights protections in schools, Duckworth announced on Tuesday morning that she would vote against confirming DeVos. “Cutting resources for our public schools is not a formula for success; it robs students of their right to a quality, equitable education,” she said in a statement. "I was also stunned by her apparent lack of knowledge of the Individuals with Disabilities Education Act (IDEA) – a federal law that requires schools across the nation to equitably educate students with disabilities. And I am troubled by her statement that the treatment of students with disabilities is ‘an issue that’s best left to the states,’ which makes her misunderstanding of the law’s premise clear."

This article originally misidentified third-year Anna Wood as a second-year.