Get this in your inbox on Tuesdays and Fridays

Why? Officially, it’s “College Break day.” But there’s a running theory that the administration gives us a day off in the middle of winter (and midterms season) to combat depression.

In 2007, The Maroon ran an op-ed critical of the joke that it’s “Suicide Prevention Day.”

“The idea that we get one day off in the dead of February to avoid the bad publicity of bodies hanging off of the Hull Gate gargoyles is a campus-wide joke. Unfortunately, that’s all that Suicide Prevention Day is to the students here: a joke. An uncouth joke to be sure, but a joke nonetheless. We demonstrate no awareness of just how real a risk self-destruction is for many of those around us.” (bit.ly/2krynz0)

---
Fabiana’s Bakery is moving to a new location at 53rd Street and Hyde Park Boulevard on March 1. (bit.ly/2k9Tk0s)

---
“Free Speech Professor Takes Heat for Using Racial Epithets in Lecture at Brown,” by Lee Harris: “[Geoffrey] Stone thinks that racial epithets and other forms of offensive speech should not be restricted in academic discussion. … ‘The use, for example, of epithets in a classroom I would think perfectly appropriate if relevant to the material, but inappropriate if a faculty member calls a student a kike, or if a student calls another student a nigger; I would say, ‘no, that’s crossing a boundary which, in this setting, is not acceptable,’ Stone said [at Brown]. …

… During the question-and-answer session, Brown third-year Naomi Chasek-Macfoy asked Stone to refrain from the use of racial slurs. ‘I wanted to thank you for your charge to boldness, and, in that spirit, would also like to respectfully request that you refrain from openly using racial epithets in public spaces. …’

… Stone replied: ‘I teach, among other things, the First Amendment. There are cases that involve these words. You can’t talk about the words in the class when you’re discussing whether the word should be legal or not? Doesn’t make any sense. …’” (bit.ly/2ky27fU)

---
“White Nationalist Posters Found At U. of C. 10 Times In Two Weeks,” by Sam Cholke, DNAInfo: “The posters all depict a black-and-white photo of a neo-classical sculpture with slogans such as ‘Serve Your People,’ ‘Our Future Belongs To Us’ and ‘Let’s Become Great Again.’ Identity Evropa, which claimed responsibility for the posters on Twitter, is a part of the alt-right movement and advocates white supremacy. It has recently protested against immigrants in San Francisco, among other places.” (dnain.fo/2kJnTvC)

---
In Viewpoints
The Student Counseling Service director responded to our report (bit.ly/2ks20A3) on long wait times for students seeking mental health care with a letter to the editor. He claims the experience we cite of a student who experienced delays is “not at all typical.” (bit.ly/2k8nLsQ)

Editor Sarah Zimmerman notes: The faculty-led petition calling on the University administration to provide legal protection to international students affected by Trump's executive order has been receiving world-wide attention. As of now, it has 630 signatures with professors from University of Michigan, Notre Dame, New Delhi, Bonn, and Manchester showing their support. (bit.ly/2klbfo0)

---
LOYOLA: Graduate students at Loyola University Chicago have voted to unionize—the National Labor Relations Board counted ballots Wednesday. Fifty nine percent of the votes were in favor of unionizing. It was one of the first campuses to vote since the NLRB ruled last year that grad students can unionize. (trib.in/2k9fkx8) Grad students at the University of Chicago will likely vote sometime in March or April. It’s possible, however, that the NLRB reverses its ruling with Trump appointees. In November, we published an in-depth report on what the new administration will mean for grad student union efforts. (bit.ly/2i3eMmI)

---
EVANSTON: “Interfraternity Council executive board, presidents decide to suspend social events following reports of assaults, druggings,” by Julia Jacobs and Nora Shelly, The Daily Northwestern: “...events that already have contracts signed, such as formals and date nights, will still occur. No further events will be planned or held for the time being...The move follows a University announcement on Monday night notifying students that it had received a report last week alleging four female students were possibly given date rape drugs at Sigma Alpha Epsilon fraternity on January 21. The report alleges that two of the students believe they were also sexually assaulted, according to an email to students from the University’s chief of police Bruce Lewis. Lewis said the University also received an anonymous report Friday alleging that another female student was sexually assaulted, potentially with the use of a date rape drug, after attending an event at a second, unnamed fraternity the previous night.”

---
What you’re missing if your request to join Overheard still hasn’t been approved: “Overseen at Bookstore. Send design help.” (bit.ly/2kUsJc5) 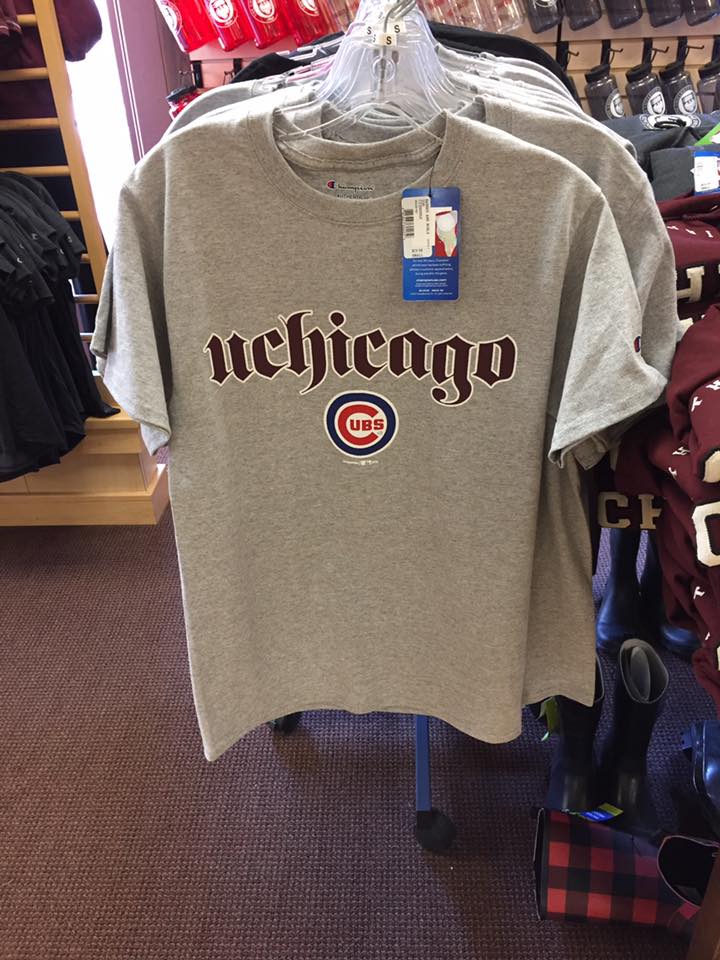 The South Side traditionally roots for the White Sox, though. This DNAInfo analysis of Facebook trends shows that some South Side neighborhoods jumped on the Cubs bandwagon in the Fall. (dnain.fo/2eC9tOw)

The Gate interviews the head of the Nieman Foundation, a journalism institute at Harvard: “I was just thinking today, oh my gosh, what if one of the results of this really tense period is that young people who aspire to a career in journalism say, ‘You know what, this isn’t worth it, I have a headache. Why don’t I go and do something where I’ll be valued?’ And I could understand that response, but it would break my heart. So I would say to young journalists or would-be potential journalists that the work is so worth doing. ... it’s not going to be easy, and the pay may not be great, and the hours are really awful, but the sense of satisfaction that you’ll feel will make it worthwhile. And that the democracy needs you more than ever.”  (bit.ly/2luf9ZJ)

The South Side Weekly has a piece on funding for Art programming at Chicago Public Schools: “When it comes time to slash budgets—something that seems like a regular occurrence nowadays—the arts programs are usually the first ones to go. … However, thanks to landmark legislation in 2012, the CPS board incorporated the arts as a core subject in schools, thereby cementing its importance to the Chicago public school system. … First approved by the school board in 2012, the city’s Arts Education Program was a comprehensive overhaul of the visual, theatrical, and musical arts in public schools (including magnet schools). The AEP’s main component consists of increasing the amount of weekly arts instruction to 120 minutes for all students. … Ingenuity, a data analytics organization exploring the arts in Chicago schools, reported that in the year following the CPS board’s approval of this plan, under 25 percent of schools met the required 120 minutes of education…” (bit.ly/2k97Iux)

On Sunday, voting closes for the next SSW editor-in-chief. The race is between Baci Weiler and Hafsa Razi.

---
Whoops. A copy editor points out that last week we sent out “The Maroon newletter,” not “The Maroon newsletter.” Which reminds me: this email blast should have a cool, University-themed name. Before we started doing this at the beginning of this quarter, I liked the name, “The 187C,” which is the Pantone code for our color of maroon.

Unfortunately, section 187 of the California penal code defines murder, and some gangs use the number as slang for murder. We went back to the drawing board, but couldn’t settle on anything. So we launched with “The Maroon newsletter” on the premise we’d seek name suggestions after we’d accumulated some subscribers. As of 3:39 p.m. on Thursday, February 9 we’re 1,342 subscribers strong. If you have any good suggestions, shoot us an email or a tweet.

Feedback via email to news@chicagomaroon.com