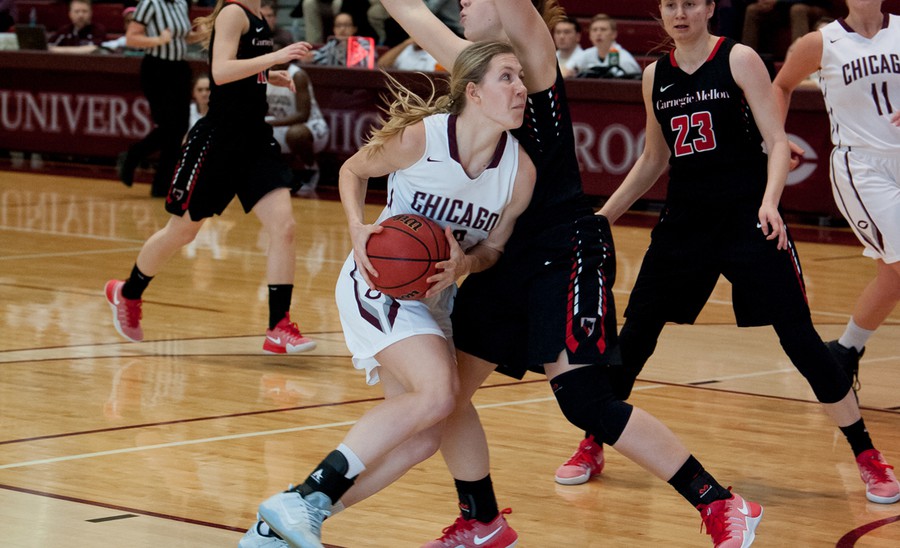 Fourth-year Britta Nordstrom charges towards the basket amidst defenders.

The first-place Maroons put their three-game win streak to the test over the weekend, hosting the University of Rochester Yellowjackets and Emory University Eagles in the final home slate of the season. After yet another sparkling display, the UChicago women picked up two more conference victories to stay even with No. 9 Wash U atop the UAA.

After defeatingnationally-ranked Rochester in their first meeting of the season, the Maroons’ confidence was evident from the opening tip. The Chicago defense asserted itself early, holding the Yellowjackets to just eight points in the first 10 minutes of action. With fourth-year Britta Nordstrom carrying the load with 13 points before intermission, the Maroons carried a 31–26 advantage into the locker room.

True to the scouting report, the South Siders capitalized on halftime adjustments in what turned into a lopsided third quarter. First-year Taylor Lake led the charge with seven points in the quarter as the Maroons exploded for a 21–5 run, forcing six Yellowjacket turnovers in the process. The streak proved to be decisive as the Maroons closed the door in the fourth quarter, cruising to a 72–53 victory.

Nordstrom finished the night with 21 points, five rebounds, and four assists, marking her fifth 20-point outing over a six-game stretch. Lake and fellow first-year Mia Farrell also finished in double figures Friday, chipping in 11 points each for the Maroons.

In Sunday’s tilt, fourth-years Michelle Dobbs, Stephanie Anderson,and Britta Nordstrom took the court for the final time at Ratner Athletics Center. After a heartwarming tribute to the successes and program contributions of the senior class, the Maroons sent their fourth-years out in style by rolling conference foe Emory University 77–56.

After trailing in the early going, a pair of threes from first-year guard Miranda Burt highlighted an 11–2 run that put the Maroons ahead 18–17 at the end of the first quarter. Chicago would not look back, extending the lead in the second quarter and carrying a 39–30 lead into the break. Second-year Ola Obi anchored the first-half Maroon attack, recording eight points, four rebounds,and three steals in just 10 minutes on the floor.

Sticking to tradition, the Maroons came out of the locker room firing on all cylinders. Tallying the first eight points of the quarter, Chicago rode the momentum to an insurmountable 17-point advantage. It was all Chicago down the stretch, holding the Eagles to just seven fourth-quarter points to extend their conference win streak to five games.

With just three regular season contests remaining, Chicago remains in control of its own postseason destiny. The Maroons kick-off their road trip Friday evening in Waltham, Massachusetts to take on the Judges of Brandeis University before heading to NYU to battle the Violets on Sunday afternoon. With a winner-take-all season finale looming, this weekend’s slate is crucial for the Maroons to realize their postseason dreams. Friday’s tip-off is scheduled for 6 p.m. CST.