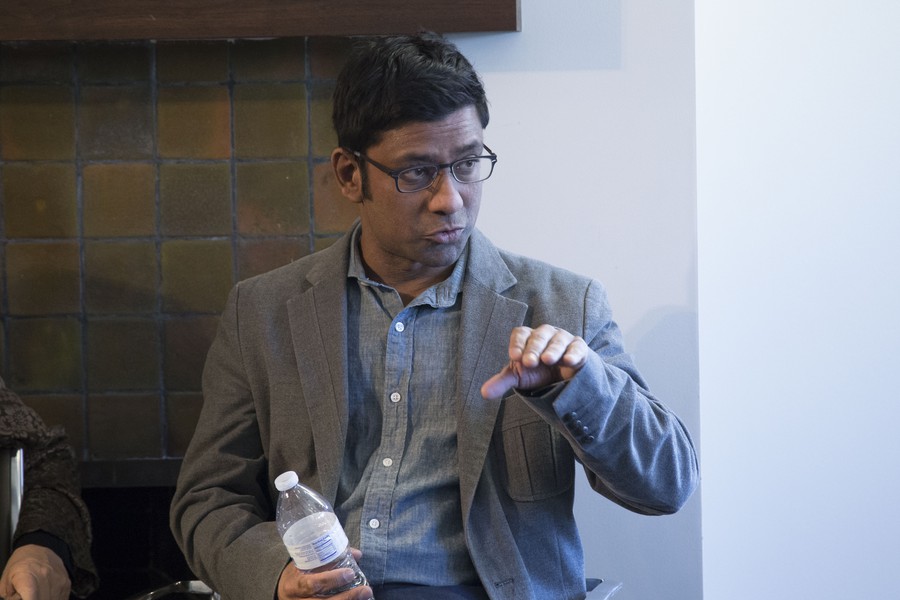 Aziz Huq, Odette Yousef, and Susan Gzesh discussed Donald Trump’s recent travel ban Thursday at the latest in a series of Institute of Politics (IOP) events on “America in the Trump Era.”

The talk opened with Huq, a professor at the Law School who has filed an amicus brief arguing against the travel ban on behalf of several Muslim professional groups. He outlined the direct effects of the executive order, which banned citizens from seven Muslim-majority countries from entering the United States for 90 days, suspended the current refugee program for 120 days, and banned refugees from Syria indefinitely. Huq discussed the order’s creation of a system for certain existing government agencies, such as the Department of Homeland Security, to cooperate in determining whether countries should be removed from or added to the list of banned countries.

The speakers then discussed the indirect consequences of the order. “The order appears to have had a licensing effect on the behavior of customs and border protection officials,” Huq said. He cited reports of customs officials asking citizens of non-banned countries to renounce green card status and focusing questioning and detention on “people who are perceived…as being Muslim.”

Gzesh, who is the executive director of UChicago’s Pozen Family Center for Human Rights, then discussed the changes the administration made to its interpretation of the order, including the decision to allow green card holders from banned countries into the United States. She attributed the changes to a combination of factors, including the “tremendous amount of chaos and backlog” created by this aspect of the order and the actions of many lawyers and protesters at airports around the country. She added that the administration’s change of policy to allow Iraqis with special immigrant visas who aided the U.S. military into the country was due to the Pentagon’s protests that few foreigners would work with the military if the military could not promise protection by moving them to the United States.

Huq then discussed the legality of the executive order itself. “There are an embarrassment of riches in terms of constitutional arguments for why the executive order is invalid,” Huq argued. He said it violated the establishment clause, the free exercise clause, and the equal protection clause. “The text of the order does support on its face the inference that the order is motivated by animus,” Huq said, meaning that even ignoring any outside comments, the order was clearly motivated by hostility towards Muslims based on their religion, and so is unconstitutional.

Huq said the administration also argued that the courts could not review the case on the grounds that the executive order was a matter of national security; a few hours after the talk, the Ninth Appeals Court ruled against the executive's claim when it upheld a temporary stay of the travel ban issued by a lower court.

Huq finished the talk by answering questions. One student asked whether the order could create a precedent for a broader ban. Huq replied that he believes the order was motivated by invidious and hateful stereotype of a religion. “My own view is that if it is feasible for the government to take action on the basis of invidious and hateful stereotypes about a religion and particularly if its argument that national security provides…a shield from reviewability...[it] would apply to citizens just as much as it does to non-citizens,” he said.