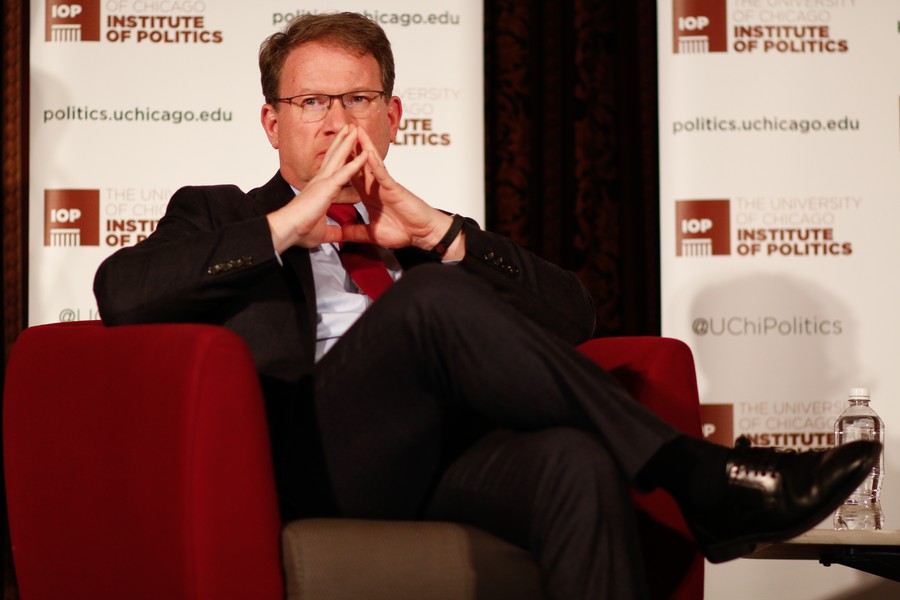 Jeffrey Goldberg, the Editor in Chief of the Atlantic, discusses foreign policy and journalism in the Trump age with Executive Director and Publisher of the Bulletin of the Atomic Scientists Rachel Bronson on February 20th.

On Monday, Jeffrey Goldberg, editor-in-chief of The Atlantic, came to the Institute of Politics (IOP) for the latest of a series of talks on American foreign policy under the Trump administration.

Throughout the talk, Goldberg argued that President Donald Trump is putting unprecedented pressure on the basic bureaucratic systems that form the foundation of American government.

“Our government institutions are the envy of the world. We’re the gold standard,” he said. “There’s a reason that not every country has to have an FDA, for instance. It’s because we have an FDA. There’s a reason that Ebola didn’t murder half of west Africa. That’s the CDC…the reason that we can buy an iPhone is because the U.S. Navy is making sure that the international ceiling between Asia and the U.S. are free of piracy.”

“These things work. And we’ll miss them if they’re gone,” he said.

Goldberg also linked Trump’s disparagement of government institutions with his nomination of political outsiders with little or no experience in government.

“There were a lot of things that we thought were governed by laws that are actually just governed by norms. It has been a norm that we find extremely qualified people to run complicated government departments,” he said. “Why would we possibly need legislation to say that people with expertise in a particular area should be running large, complicated government departments?”

Calling the shift away from experts toward outsiders and dissenters “a return to pre-Enlightenment values,” Goldberg argued that another effect of mounting distrust in American institutions is popular support for more isolationist foreign policy. He attributed this, in part, to past presidents’ failure to emphasize America’s centrality to economic and diplomatic concerns on a global scale.

“We’re victims of our own success,” he said. “I don’t think past presidents have done a good job of explaining and embracing the ideas of American indispensability. Obviously, the Iraq War was generally interpreted as being an overreaching, a tragic misapplication of American idealism and American interventionism, and so we’re suffering the effects of that.”

Goldberg argued that support for Trump’s brash and unpredictable persona might be a response to President Barack Obama’s upstanding demeanor, that reflects a desire for the excitement of reality TV. “The country was tired, in a way, of having such a staid, appropriate, dignified family man president who revered the office.”

Citing a column in The Atlantic by Miss Manners, the pen name of Judith Martin, a Washington Post advice columnist on etiquette, Goldberg argued that support for Trump’s brash and unpredictable persona might be a response to President Barack Obama’s upstanding demeanor, that reflects a desire for the excitement of reality TV. “The country was tired, in a way, of having such a staid, appropriate, dignified family man president who revered the office.”

“There are 330 million or so Americans, and no two Americans are less alike than Barack Obama and Donald Trump, just in terms of personality and disposition,” Goldberg said.

But Goldberg identified one similarity between the two presidents he otherwise describes as diametrically opposed. “In some ways Donald Trump finds himself on a continuum with Barack Obama in his thinking on foreign policy,” he said.

Citing his interview last year with Obama, Goldberg referred to Obama’s criticism of institutions like NATO, of which he said, “Free riders aggravate me.”

“Trump follows Obama somewhat naturally in the sense that Obama questioned some of the underlying assumptions of American foreign policy making and global leadership in the post–World War II era. Hillary Clinton was going to return us to the norm.”

Goldberg suggested that both Obama, in his reluctance to use military force abroad, and Trump, in his “America First” rhetoric, were responding to shifting public opinion about America’s presence on the world stage. “It becomes a fatiguing thing over 70 or 80 years to carry this big load.”

Referring to his November interview with former Secretary of State Henry Kissinger, Goldberg cited the statesman’s overarching critique of Obama’s foreign policy as an underuse of hard power, and a miscalculation of “the relation between power and diplomacy.”

According to Goldberg, Kissinger found it ironic that former Secretary of State John Kerry, who began his career in public service as a Vietnam war dissenter, found himself urging Obama to be more hawkish in regions like Syria.

“Kissinger took a certain satisfaction in watching Kerry transmogrified from a guy who thought that Kissinger was a war criminal to a guy who is asking the President to bomb Bashar al-Assad in order to prove America’s credible when it makes a demand,” Goldberg said.

“This is an advertisement, in some ways, for unpredictability,” he said. Goldberg said that in the Nixon administration, Kissinger would use President Richard Nixon’s volatility as a bargaining chip.

“He would go to world leaders and say, “Look, I know what we need to do, but my boss is crazy, we don’t know what that guy’s going to do.” And it’s a great negotiating tactic.”

Goldberg said that Trump’s unpredictability far exceeds Nixon’s, and this creates a “wait-and-see” attitude among foreign statesmen and domestic private sector leaders alike, from the prime minister of Sweden to the president of Nordstrom.

“Everybody’s sort of waiting for the attack, waiting to have some weird commentary made…trying to keep their head down. Maybe this is an extraordinarily effective way to go about managing a world. I don’t think so, but this unpredictability has a way of making everyone adhere to rules because they fear the American president won’t adhere to any rules.”