Who Tells Your Story: Fiction Has Its Eyes on You, History 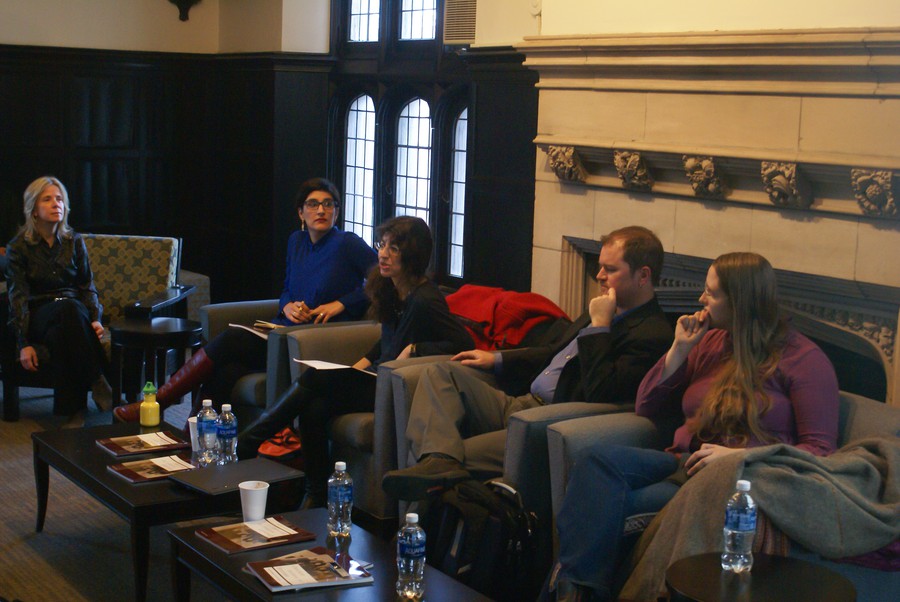 Last Wednesday, the Chicago Journal of History hosted a panel discussion entitled “History and Fiction: Narrative, Contexts, and Imagination” to explore the intersection of these two disciplines. Associate Professor of American History Jane Dailey moderated the panel, which featured four researchers who explore how we define the historical and fictional.

The first speaker, Paola Iovene from the Department of East Asian Languages and Civilizations, described the relationship between the two as an “entanglement.”

“I call history the conditions that enable the formation of certain fictions,” Iovene said.

She pointed out that the retelling of historical events—depending on the speaker, occasion, and motive—can alter the narrative. A scholar of modern Chinese literature, Iovene focuses on how China’s ascendance as a global power has shaped its literary landscape. She talked about how “reportage literature,” a genre characterized by the retelling of contemporary events observed firsthand, redefines the boundaries of literature by blending fact and fiction. Using the 1939 short story collection One Day in Shanghai as an example, Iovene discussed how various authors—from clerks to dancers—conveyed their eyewitness accounts. The stories gave the work “special status” as a literary text while “disavowing it by claiming commonalities with historical phenomena.” Such a narrativization of history enables a literary retelling of the past.

The next speaker, David Perry, shifted away from literary texts to discuss 18th century Venetian paintings. A scholar of medieval Mediterranean history from Dominican University as well as a journalist and cultural critic, Perry is most interested in “narratives of material exchange.” Such narratives line the walls of the Great Council Chamber in the Doge’s Palace in Venice, telling stories about Frederick Barbarossa kneeling before the Pope after the Venetian fleet "defeated" the emperor and exaggerating Venice’s attack on Constantinople during the Fourth Crusade.

These narratives, however, are false. In reality, Venice stayed out of the Italian wars of the 1170s; it was a neutral space where peace treaties were later signed.

“We could talk about them as lies, but I talk about [them] in terms of fiction…. [The Venetians] were interested in the ways in which narrative creation could access deeper kinds of truths that help shape identity and… reality,” Perry said.

He compared this narrative creativity to how Italian poet Lucrezia Marinella reimagined the blind and aged Enrico Dandolo as a great epic hero—just as Alexander Hamilton, portrayed in history textbooks as the white son of a Scottish father and British West Indian mother, was an immigrant of Caribbean descent in the musical.

Fiction is also used as a tool for understanding the present. Like Iovene, Renaissance historian and science fiction writer Ada Palmer believes that fiction can exceed its historical restraints to offer unexpected solutions to contemporary problems.

“One of the great things that science fiction does as a genre is fight our moral battles before we get there,” Palmer said.

Books about cloning, for example, provide case studies of a world where clones may integrate into society. In 1943, Japanese writers wrote about the enfranchisement of artificial intelligence as a way of discussing racism in a heavily censored environment.

Palmer also described how histories that strive to be more accurate cannot elicit the emotional response necessary for people to understand the actual experiences of history. Referring to the simulation of the papal election that takes place in her popular Italian Renaissance class every year, Palmer pointed out how students had unique reactions to Perry’s description of the Venetian paintings (the “Venetian” in the audience turned red as a cherry).

“Fiction helps us understand why fractious city states betray each other every six months,” Palmer said. “Fictions, and narrative history, and attempts at objective history…cross the barrier between us and understanding past peoples.”

Professor Ghenwa Hayek spoke last. A scholar of modern society and literature in the Arab Middle East from the Department of Near Eastern Languages and Civilizations, Hayek is from Lebanon, a place that she believes has simultaneously “very much and no history.” The Lebanese government cut historical records of all post-1946 events from school curricula in order to smother information about the creation of Israel and the civil war of 1975–1990. As a result, contemporary Lebanese authors stepped in to fill the narrative gap.

“The writing of fiction became the cultural resistance,” Hayek said, describing fiction as the “memory of those years.” Scholars now turn to literature to research a rejected history.

Hayek concluded her presentation by encouraging the audience to think about fiction, not necessarily in terms of history, but as the future: “What will we archive? How will it be presented?”

Such questions are particularly pertinent, as all speakers touched on the relationship between history and modern day politics. It was inevitable that the discussion would turn political: one could hear the protests over Corey Lewandowski speaking on campus taking place outside the Quadrangle Club during the event, and the speakers referenced the sounds of the protest numerous times.

“At this moment of alternative facts, I want to stress the importance of facts,” Iovene said.

Hayek, too, asked the audience: “In the era of alternative facts, what do we have to be careful of as we write the history of the present?”

Perry wondered whether there might one day be a painting in the White House depicting President Donald Trump’s inauguration as the most well-attended in history. Palmer even began her talk by noting that all copies of George Orwell’s 1984 had sold out within a month of Trump’s election.

The entanglement of history and fiction alters historical narratives in ways that are often unreliable. From 18th-century Venetian paintings to 20th-century Chinese reportage literature, retellings of the past through fictional means encourage us to reconsider why and how we capture the past. Yet in all cases, it is clear that people look to fiction for truth—of the past, and the future.