The Storied Past of the Regenstein Library 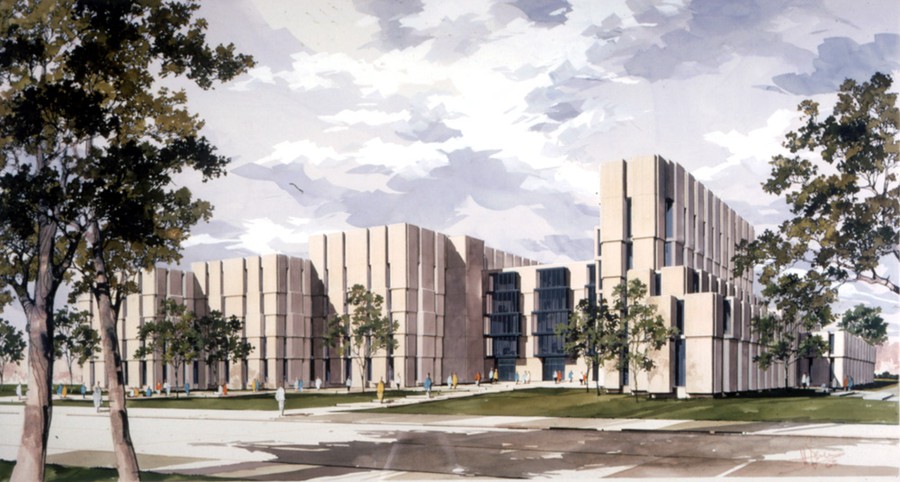 By Alex Ward    and Feng Ye

Regenstein Library is one of the University of Chicago’s most distinctive buildings, despite being a relatively new addition to the campus. Built over the course of the late 1960s and into the ’70s, the Reg as it stands today was shaped by an environment of significant political and economic turmoil. The Nixon presidency, the Vietnam War, student arrests, labor conflicts, and financial struggles for the University and the country all influenced the building’s planning and construction, and the library represented a major shift in the University’s development toward a policy of major facilities expansion.

The Reg was born during years of expansion for the University. The University struggled in the 1950s, after President Robert Maynard Hutchins restructured the University despite its financial insolvency. President Lawrence Kimpton wrote to his father in 1951, “Hutchins left this University in a fantastic mess financially and it is going to be a hell of a job getting it squared around.” He later wrote, “Mr. Hutchins very much over-extended the University, and it is my job to contract it…. This is going to be a very tough thing to do and will not gain me great popularity.” In the 1950s, Kimpton executed strict budget slashing that aggravated the outflow of top faculty to other elite institutions. The fund-raising campaign that Kimpton initiated only achieved partial success, and proved insufficient for projects like the Law School’s new building south of the Midway, whose construction only started after Kimpton was overruled by the Board of Trustees.

After Kimpton left in 1960, the following two decades saw a massive expansion and recapitalization, which would later be paid by doubling the level of tuition income and a new major fundraising campaign. A large part of the campaign was expected to benefit from a huge grant from the Ford Foundation’s Special Program in Education initiative, which eventually supported 16 universities and 61 colleges. The first institutions that received grants from the foundation included University of Denver, Johns Hopkins University, University of Notre Dame, Stanford University, and Vanderbilt University. To secure funding from the foundation, the University had to forge a long-term plan to show that its goals were serious and realistic. 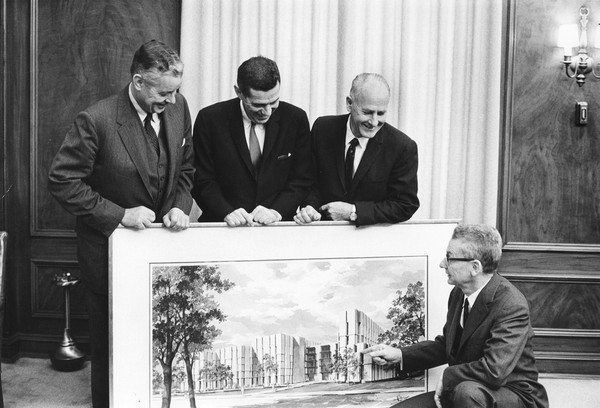 Meanwhile, the new position of provost was created and made responsible for planning and overseeing academic affairs of the University. The provost was also in charge of all related budgetary issues. Edward H. Levi, former dean of the Law School, was appointed the first provost of the University in 1962, and brought with him an ambitious vision for “a deeply integrated university with a common culture characterized by scholarly rigor and intellectual meritocracy.” Levi undertook a massive planning process in response to the University’s internal needs, and to persuade the Ford Foundation of the University’s great potential as an outstanding academic institution. In 1965, Levi completed the Ford Profile, a two-volume report that detailed the University’s current situation and its future needs, and the Board of Trustees voted unanimously to endorse the plan as the guideline to the University’s future developments.

Besides further expanding size of the faculty and the amount of faculty compensation, the plan intended for the University to invest in major capital improvements, the most significant of which was the construction of a research library for the humanities and social sciences. By this time, Harper Memorial Library, built in 1912, had virtually reached its capacity for books. With its first donation in 1964 and a large fund secured in 1965, the Reg was the cornerstone of the University’s long-term development, and rose to be a high priority of the University. 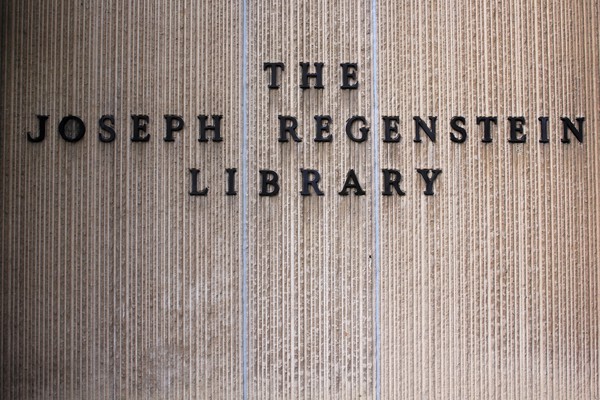 The new building’s open shelf space allowed the administration to renovate Harper into a College center consisting of a study area, offices, and classrooms. The renovation did not include the creation of the Arley D. Cathey Learning Center, the main set of reading rooms on the third floor of Harper, which was only converted from a library space in Autumn 2009 as the Harper Memorial Library Commons.

An initial check of $500,000 was presented to the University by the Harriet Pullman Schermerhorn Trust in January of 1964. In October of 1965, the University received a $10 million gift from the Joseph and Helen Regenstein Foundation, whose namesakes also became the library’s.

Throughout the ’70s, the University continued to come up with various library fundraising plans. Proposed plans included “Friends of the Library,” which encouraged gift membership, and the “Fund of Books,” which was intended to be a gift opportunity for alumni, faculty, and non-alumni donors. Compared to Harper, which was built at a cost of $820,000 in 1912, the cost of Regenstein totaled $20,750,000, including all fees, equipment, furniture, landscaping, site preparation, moving, and other incidentals.

At the cornerstone-laying ceremony in 1968, Levi said, "I cannot imagine an event in the history of the University of Chicago which is more important than this one. Few events can be more symbolically important for our society. We live in a time which needs to find itself. It cannot find itself unless it looks back to the roots of its history, its culture, its tradition. It is this library which will represent and make available that culture and that tradition.” 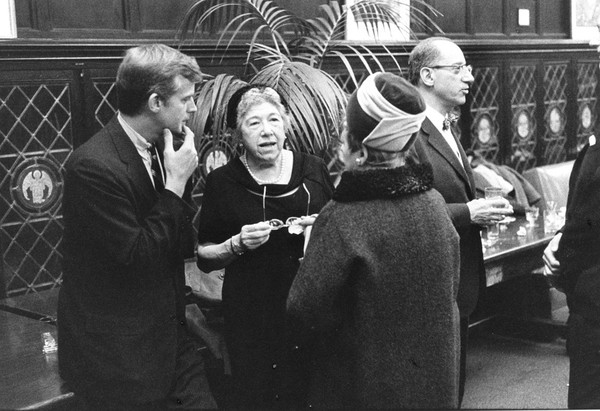 Helen Regenstein and Edward Levi chatting at the cornerstone laying ceremony for the Regenstein library.

A few sites were suggested for the construction of the new library. At first, the tennis courts at 58th Street and University Avenue were under discussion; South Campus was also among the suggestions that were eventually abandoned. During the building’s construction, the courts were briefly occupied by construction trucks parked to test the weight capacity of the surrounding soil. The site for the new library was eventually chosen at the former location of Stagg Field, the University's athletic field from 1893 to 1939, and the same site where a group of scientists led by Enrico Fermi had conducted the first self-sustaining nuclear chain reaction in 1942 under the stadium’s west bleachers. The Enrico Fermi memorial currently stands right behind Mansueto Library and west of the Reg.

By 1964, the University’s Board of Trustees had hired the architectural firm of Skidmore, Owings, and Merrill (SOM) to develop plans for the library and its corollary facilities. President George Beadle expected the number of volumes, which at the time totaled 2,200,000, to double within the next 20–25 years. The new library would require facilities for 4,000,000 to 5,000,000 books. Built in a way to reduce the impression of its massive size on the outside, the library had 577,085 gross square feet of floor space within. 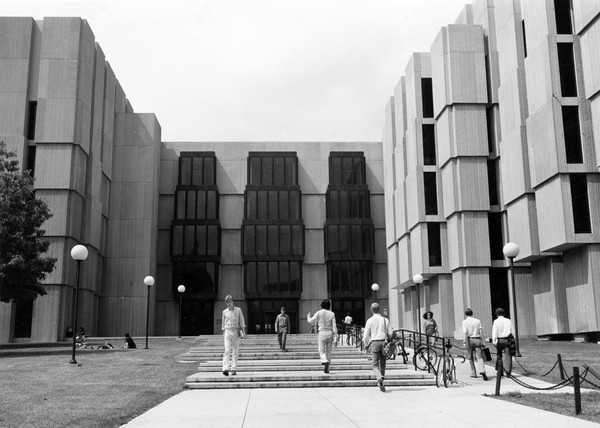 The SOM design team for the new library was led by Chicago architect Walter Netsch, who had previously designed buildings for the University of Illinois and Northwestern University. Netsch was commissioned to build the library out of the same Indiana limestone as the buildings on the central UChicago quad, although the building’s Brutalist design makes the stone strongly resemble concrete from afar. In an October 1970 interview with The Maroon, Netsch said that the final building had come out very close to his original design, although he lamented that there were not enough funds to landscape the grounds, which were limited to grassy fields and a parking lot for more than a decade after the building was finished. Netsch expressed pride that the Reg was “more Gothic” than other new campus buildings, but suggested that the interior could be improved with decorative art or plants. “These are the things that must be brought to every building,” Netsch said. “Otherwise, it’s inanimate.”

Although it was scheduled to be finished by the start of the 1969, the project was delayed by scarce building materials, inflation, and shipping strikes; even after the building was initially completed, its early months were troubled. In early October of 1970, the Reg’s first floor opened to students and faculty, but the other six floors remained in the finishing stages of construction. The building’s front doors weren’t used at first, because issues with the construction of the threshold would have caused them to warp from use, and congestion on 57th Street led the University’s planning director to suggest that the street be closed to non-emergency traffic. Internally, however, the Reg had an initial storage capacity of 1.8 million volumes at its completion. The University’s then-president Edward Levi described it as “the greatest facility of its kind in the world” in his 1970 “State of the University” address.

As a major campus landmark, the Reg was the site of campus unrest on several occasions during its first few decades. In 1973, protests broke out after the University of Chicago Library system fired six prominent employees including the Regenstein’s coordinator for public services, ostensibly for budgetary reasons. Other library employees contested that four of the employees were fired for being active organizers in the recently formed library union. Library employees went on strike outside the Reg and members of the UChicago student body and National Library Associations called for the employees to be reinstated. However, later that year the National Labor Relations Board, with which the University had been tangled in legal battles over the union since 1971, decided not to support the employees’ case on the grounds that their supervisory positions made them unable to organize for the union. The Reg’s grounds were also the site of antiwar protests in the 1970s and antinuclear demonstrations in the 1980s as the site of Fermi’s reactor experiment.

Though the Reg didn’t originally have a café, students immediately asked that the University construct one over the objections of the University of Chicago Library director Herman Fussler, who argued that the project would be too expensive and potentially harmful to the books. Concerns aside, in 1978, Student Government worked with the library and administration to plan a restaurant on the A Level and provided the funding for its construction. The Ex Libris Science Digest Coffee Shop that opened in winter quarter of 1979 was similar to the current café, which moved to its current location after the opening of the Mansueto Library in 2011 freed up former stack space on the first floor. Between 1998 and 2000, the café was temporarily reduced to “a few airpots and a rack of candy” in an A-Level conference room as a result of a renovation project, according to the Ex Libris website. 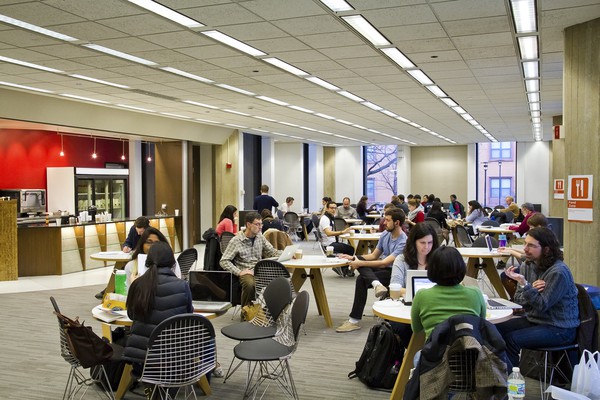 Mansueto and its dome were the product of the University’s realization in 2005 that it would be facing a major shortage of storage space for new books. The result was a 3.5 million–volume expansion to the University’s collection size with an additional reading room lit through the wing’s distinctive glass dome. The new storage space under Mansueto holds, for the most part, copies of books formerly stored in the Reg that are now also available online. Besides its automated book storage and retrieval system, the largest in North America, Mansueto is notable for the dome’s use as a shooting location for the 2014 film Divergent.

Today, the Reg continues to be a central focus of campus life and expansion. Over the past summer, the A Level of the library was renovated into an open space for group work, with round tables and walls covered in clear dry erase paint that can now be used as whiteboards. According to Library News, the easternmost section of the floor will be the next focus for change.

The Storied Past of Harper Memorial Library

When Harper Memorial Library first opened, it was the main library at the University. Over one hundred years later, it serves an entirely different purpose.