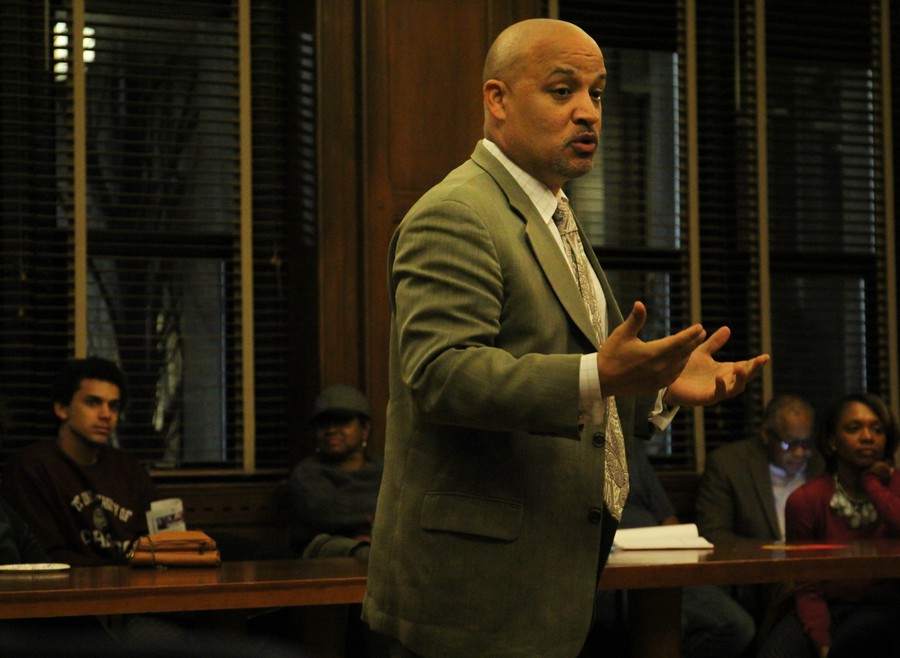 The final Fourth Ward aldermanic forum before the election was hosted by the University of Chicago Democracy Initiative and the nonprofit Chicago Votes yesterday at Chapin Hall.

Described by Rolling Stone as “the man trying to take down Rahm Emanuel,” Coalition for a New Chicago founder and CEO Livingston discussed his plans to tackle violence, education, and employment.

“Violence affects everyone, and it doesn’t respect or discriminate in terms of boundaries, imaginary lines, or whatever it might be,” he said during the forum. “We have to understand violence, and I believe in a method of reverse engineering violence to understand why it occurs in the first place. And employment and education, those go hand in hand.”

Lucas, a real estate attorney and former teacher, as well as an active community member and parent, is also dedicated to addressing violence in the Fourth Ward. She considers the epidemic of gang violence a direct result of underfunded schools and a general lack of commercial development.

“I think the violence that we’re seeing is indicative of our failure to fully educate our kids,” Lucas said. “Every year, Chicago takes about $230 million out of the public schools and puts it into a development program that’s supposed to be used to develop blighted communities, but it’s being used to develop downtown and North Side development and 53rd Street. Then we look at Cottage Grove and the other areas in the Ward, and those areas have been completely neglected.”

McCarthy, currently a municipal attorney and a former certified public accountant and business law professor, is similarly dissatisfied with the city council’s performance and believes he can do something about it.

“What is the number one cause of death of young black men between the ages of 15 and 34?” he asked. “Homicide. Now that stat has been around for at least 25 years. We’re talking about the same things over and over and over.  So it is quite clear to me that the current elected officials aren’t doing anything…. It is time for a new day in Chicago, and that new day begins with Gerald Scott McCarthy.”

The only candidate born in the Fourth Ward, Moore is a management consultant, realtor, and attorney whose focus includes representing children in divorce cases. He has served as a member of various community organizations, including senior housing, workforce development, and the board of the South Side YMCA.

“I’ve been actively committed to this community before an opening for alderman came along,” Moore said. “I’m on two local school councils in the Ward, for schools my children haven’t even gone to, not just ’cause I have extra time, but because I want to be part of the change in my community. So I’m here not with heavyweight relationships in the political realm; I’m not here because I own a bunch of properties and real estate throughout the Ward. I’m here because I’ve loved the community, and I hope to be your next alderman representing you and this community.”