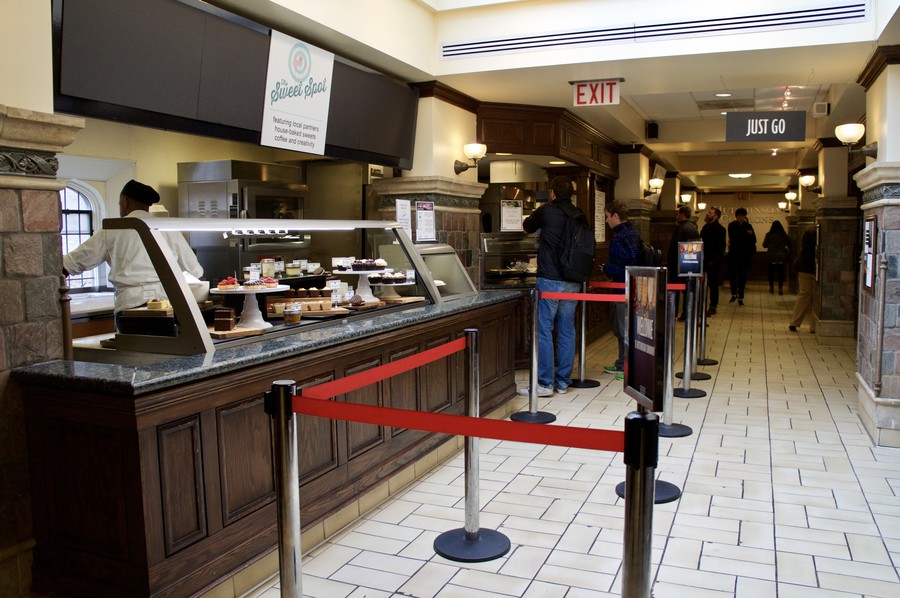 Students line up to try the new restaurants at Hutchinson Commons.

Flat Iron Grill and Pizza Pazza were replaced by Bronzeville Dog, BBQ Slow Roasted, and The Sweet Spot. All three restaurants are run by staff already working at Hutchinson Commons.

The Sweet Spot, which sells coffee as well as cheesecakes, pies, and other desserts, is part of an initiative among Bon Appétit, the Office of Business Diversity, and the Office of Civic Engagement to partner with local businesses owned by women and minorities. The Sweet Shop features desserts from three bakeries: Laine’s Bake Shop, in the South Side’s Morgan Park neighborhood; Sugar Bliss Cake Boutique, located downtown and owned by a University of Chicago alum; and Justice of the Pies, which has several locations across Chicago. Justice of the Pies will soon sell items in Hallowed Grounds and Ex Libris Cafés in addition to Hutchinson Commons.

According to a Hutchinson Commons supervisor, employees were notified by e-mail about a possible change in vendors around one month ago. The staff were not aware of the specific restaurants opening in Hutchinson Commons, however, until the change took place over the weekend. UChicago Dining did not respond to requests for comment.