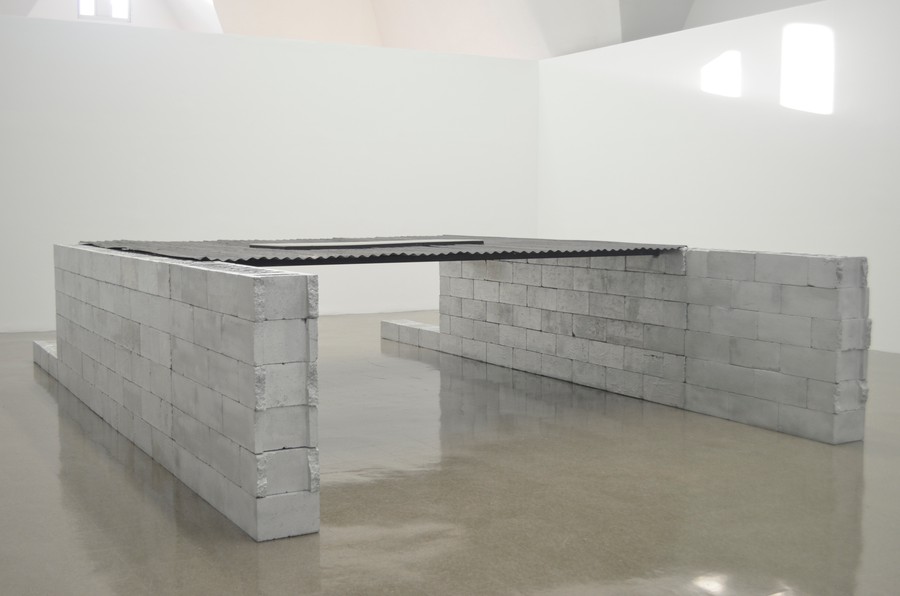 Eva I / The Chicago Maroon

A sculpture made of concrete blocks, steel, plexiglass, and paint occupies the center of the Renaissance Society’s exhibition space on the fourth floor of Cobb Hall. Untitled, constructed in 1989–90 by New York–based sculptor Robert Grosvenor, is a work that immediately catches your eye—and curiosity.

“It is as if it had just landed in the space,” curator Solveig Øvstebø said at the opening reception on February 11.

Grosvenor’s creative process relies on a sense of chance. He builds his sculptures using collected, commonplace materials. Untitled, for example, incorporates sheets of corrugated steel that Grosvenor collected in Brooklyn and later brought with him to Long Island in the late ’80s, along with concrete cylinder blocks lying around his new Long Island property.

“There’s coincidence combined with sharp and patient decision-making,” Øvstebø said. Such patience—which the work demands of both the artist and viewer—is an indispensable element of Grosvenor’s work.

Poet and critic John Yau, whose work will be featured in a monograph published by the Renaissance Society following the exhibition, spoke about the sculpture at the opening reception. Although Yau never met Grosvenor, he once spotted the artist when wandering around New York with a friend in the mid-’70s. They were passing by the Basilica of St. Patrick’s Old Cathedral when his friend turned to him and whispered, “That’s Robert Grosvenor.” Grosvenor was gesturing to his wife about the masonry of a brick wall in front of the cathedral, leaving an indelible impression on Yau.

“What he was admiring was the collective achievement of anonymous laborers,” Yau said.

Grosvenor’s work addresses the relationship between art and class—one that Yau thinks people too often ignore. In admiring the brick, Grosvenor was also expressing empathy for the anonymous workers who had contributed their labor to something that would outlast them. Through this lens, the seemingly arbitrary materials used to make Untitled take on deeper meaning: They are commonplace materials used in construction work, drawing a line between specific objects and class. Nameless, without a signature gesture or branding, Untitled identifies with the anonymous laborer.

But even this observation cannot resolve the exhibition’s many riddles. Yau noted that most people who look at Untitled get the sense that the sculpture, with its open structure and construction materials, could be used for something—but what? What could be kept inside the structure’s spray-painted cement blocks? What is the purpose of the plexiglass, which almost acts like a skylight? To compound the mystery, a small, blue tractor-like vehicle rests against a wall inside the exhibition, remaining—at the artist’s request—a “secret” object; it is not labeled or explained in any of the accompanying texts.

“Untitled provides a way for viewers to examine their own patterns of thought,” Yau said, pointing out how the process of questioning Grosvenor’s work encourages us to confront our own unconscious assumptions about art. Although walls were built inside the Renaissance Society’s white hall to frame the piece, “bridging” the sculpture and the gallery’s distinct architecture, Yau points out that the sculpture did not accept this boundary. Everything about Untitled—from its size to its grease coating that sharply contrasts with the “immaculate white cube” that houses it—invites scrutiny (perhaps too much scrutiny; recently, some viewers even tried to walk under the sheet of steel just because the large space almost seems to beg for it).

Although Grosvenor’s large sculptures are easy to perceive, they take time to “see.” Øvstebø described Grosvenor’s sculpting process as “testing and questioning but most importantly looking, and then looking again,” a process he encourages viewers to replicate. There’s even an element of humor in this maddening detective work.

“He places the work in a middle of a space and then he leaves the room,” Øvstebø said, “but he keeps the door open for us to be with it and to explore it.”

Joining the trend of concrete-related art that is taking over campus this year, Grosvenor’s Untitled is—like Wolf Vostell’s concrete car parked in the Campus North Parking Garage—more than just concrete. Next time you are early to class in Cobb, drop by the Renaissance Society to check out its elusive centerpiece. You’ll see it—but will you really “see” it? Take a look. Then look again.

The exhibition will run until April 9. Øvstebø will lead an exhibition walk-through on March 1.

Credit: The Chicago Maroon | Eva I (yes that is her last name! Literally just an "i")