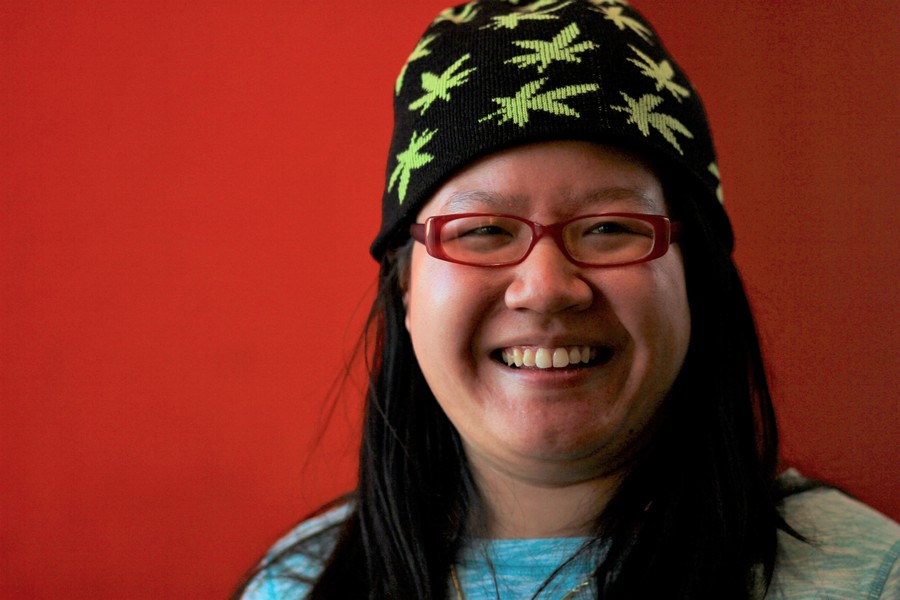 Although Emily Truong might not be a name many people at the University—outside of her friends and professors—would know, her distinctive wardrobe has made her one of the most immediately recognizable students on campus. A fourth-year math major who now lives in Campus North Residential Commons, she is widely known on social media channels and in dining hall conversations as “weed hat girl,” a reference to the beanie with a marijuana-leaf pattern she’s regularly worn since her first year.

Despite her current fame, she says that the “weed hat girl” legend only got its start by chance. The Maroon sat down with her to discuss the origin of her hat, her relationship with fame, and her plans for a legacy.

Emily Truong: It was winter quarter of my freshman year, and I hadn’t packed a proper winter hat even though I’m from Ohio, and my friend pointed that out. We were outside and I was wearing a baseball cap with earmuffs, because that was like the only headgear I had, and then she told me, “Emily, you’re from Ohio. Why don’t you have a proper hat?” And I’m like, “I don’t know, I forgot to pack mine,” and then we went back to her room, and she rummaged through her drawers, and she’s like, “Oh, here’s this hat, my friend gave it to me as a joke, but you can have it if you want,” and I’m like, “Ok,” so then I just started wearing it, and then it never came off.

Chicago Maroon: The perception is that you wear it a fair amount.

ET: Yeah, I wear it pretty much every day, except like at work and stuff, because I don’t want to project that I’m a stoner in front of my boss.

CM: Is there a specific reason?

ET: Is there a specific reason? I like the hat. I don’t smoke that much, to be honest.

CM: Are there times when you’ve had to take off the hat?

CM: Have you ever accidentally worn the hat to work?

ET: No, that hasn’t happened yet, but sometimes I walk out of the Law School and I put on my hat, and one time I ran into my boss, and he just kind of looked at me and laughed and said, “Have a good weekend, Emily,” and I was like, “OK”. So it probably wouldn’t surprise him if I did wear the hat to work, but I’m keeping it off just in case.

CM: Have you ever been approached by people in real life about the hat?

ET: Yeah, I get comments pretty frequently just from people in the street. “I like your hat,” and I’m like, “Yeah.” One guy approached me like, “Do you want some drugs afterwards?” and I’m like, “Uh, no.”

CM: Where did that happen?

Truong isn’t very prolific on social media, and most of the attention “weed hat girl” has gotten doesn’t involve her directly. She has posted about the hat once:

ET: One time I posted when I thought I had lost my hat, and I asked, “Has anyone seen a black beanie with green leaves on it? Thanks.” But it turns out it was in my room the whole time, so I felt really stupid after that, and I just quietly deleted the post.

CM: Do you remember reactions?

CM: Do you remember when you first became aware of people knowing about you because of the hat?

ET: I think like during sophomore or freshman year, when Yik Yak was still popular, one of my friends showed me some Yik Yaks of people saying, like, “Weed hat girl? More like ‘I wanna wed that girl.’” That was my favorite Yik Yak, probably. And there were just a lot of Yik Yaks like, “Spotted: weed hat girl” or “Where is weed hat girl?” or “weed hat girl is my roommate,” which—that I thought was weird, because I’ve never had a roommate. I’ve always had a single room. I had a suitemate, but I don’t think she interacted with people enough to actually post that. I don’t know if she still goes here, even. And then there was one poser who was like, “My brother gave it to me as a joke, but it’s chill...Now we’re chill.” I’m like, “Poser, I don’t even have a brother.”

CM: It was someone pretending to be you?

ET: Yeah, on a Yik Yak, in a comment, like, “Hey, my brother gave it to me as a joke, and I got mad at him when I realized what it was, but now we’re chill.”

CM: How do you feel about the attention that it’s gotten?

ET: I feel like…At first I thought it was weird, but eventually, I kind of grew to like it, because I never thought that it would cause such a stir among people. I just wore the hat because it was a free hat and it was literally the only winter beanie I had during that time.

CM: Have you ever worn the hat to class?

ET: Yes, I’ve worn the hat to class. Usually, for my hat rule for class, the first week I don’t wear it because I don’t want to establish that I’m the weed hat girl on the first day of class, but then once they start to know me a little bit, then I start wearing it second week.

CM: Have any of your professors reacted?

ET: One of my professors, a creative writing professor, he wanted to set up one-on-one meetings with us, and then at the end of class, he was like, “Emily, when we have this one-to-one meeting, I’m gonna ask you about your hat,” but he never did, actually.

Truong will graduate soon, but she doesn’t want the weed hat to leave the UChicago campus when she does:

ET: If my sister gets into UChicago, I want her to continue wearing the hat. If she says no, I’ll be like, “You’re bound by blood to continue the weed hat girl tradition.”

CM: Would you give her this weed hat?

ET: Yeah. If she doesn’t get in, though, I am planning to put on Overheard, “Hey, who wants to be the next bearer? Submit applications.”

CM: You’re going to pass it along?

ET: I’m probably going to do it. I’m not sure yet, but probably. I’ve thought about it as a joke, or maybe not. “Write a 500-word response on why you think you are worthy of wearing the weed hat.”