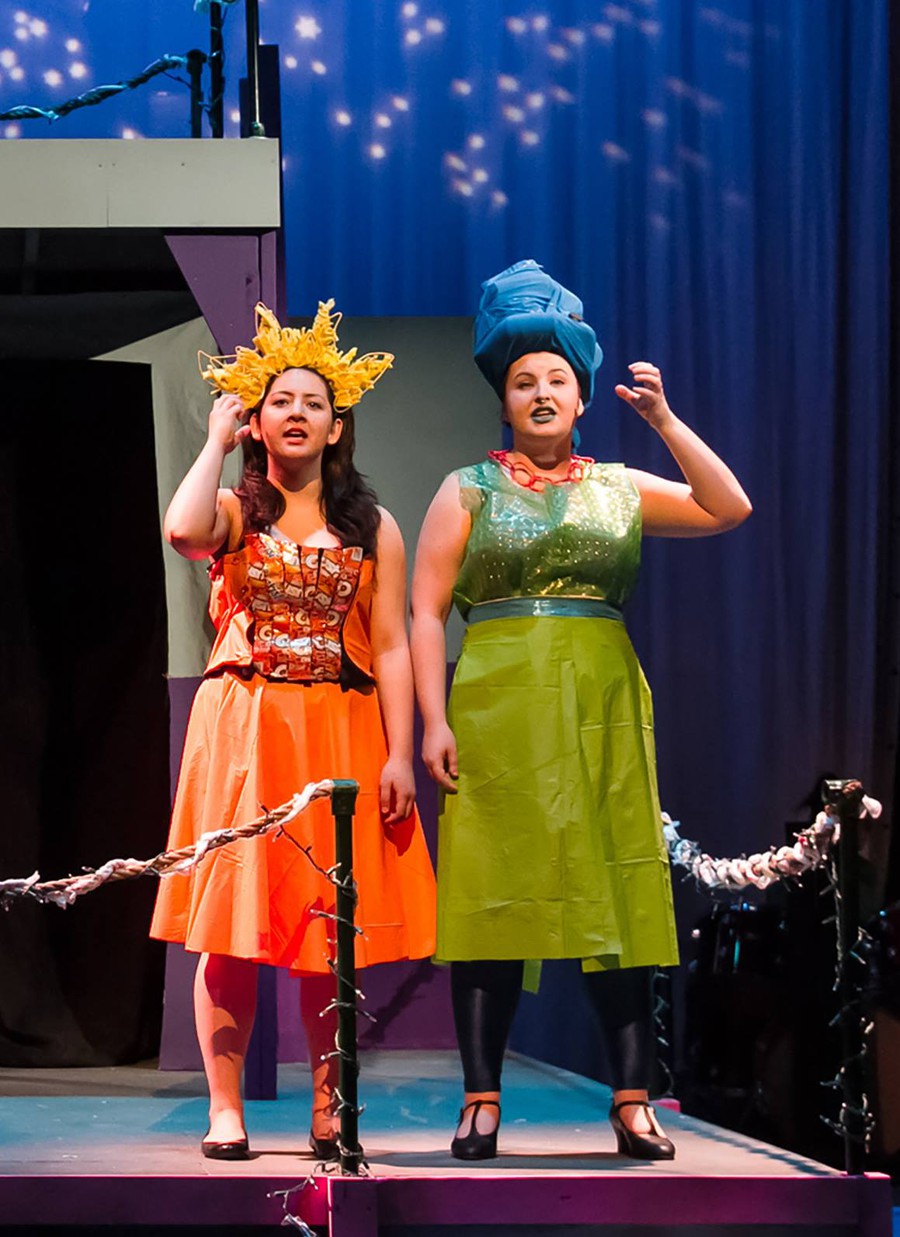 Hana Eldoussky and Lexi Turner belt out a rock-ballad rendering of "Cape Feare."

It’s hard to answer when people ask what Mr. Burns, A Post-Electric Play is about. There’s no easy way to describe a drama/musical mashup that works on three meta-artistic levels (drama, behind the scenes of play, play-within-a-play), spans over 80 years, and deals with post-apocalyptic, post-electric, and post-cultural themes—and is all based around an episode of The Simpsons, “Cape Feare,” which is itself based on another movie (Cape Fear).

The play opens with a camp of survivors of nuclear disaster who attempt to recreate an episode of The Simpsons from memory to pass the time. Seven years later, and they’re now a theater group that earns a living by putting on performances of episodes, complete with commercials. Finally, 75 years later, the result of all this recreation and interpretation is a full-blown musical parable reimagining the episode.

Directed by fourth-year Alex Hearn, the UT/TAPS production of this eclectic and idiosyncratic play ran from March 9 to 11, drawing the audience into the world that writer Anne Washburn imagined.

The performance came alive in its ability to transform and shift while simultaneously keeping the audience engaged throughout the show. Much like the meandering, never-quite-ends-up-where-you-expect-it nature of The Simpsons itself, the play’s journey, not destination, is the source of the enjoyment. It goes from a tense campfire conversation to a rock-ballad musical opera within two hours and yet somehow makes complete sense. Yet throughout the delightful, giggling madness, there are dark streaks—a survivor trying to find lost friends and family, a shootout over money in a post-apocalyptic world. 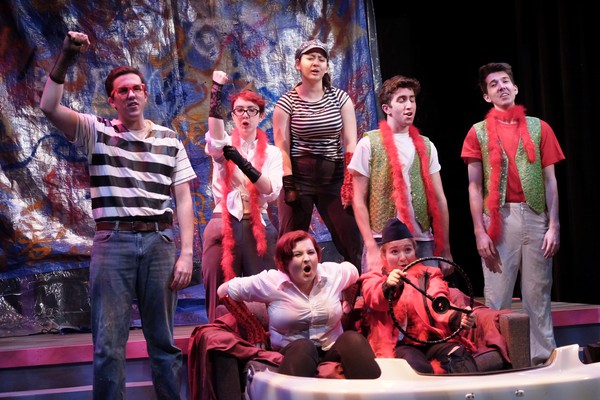 Searching for meaning or lost on the road? The cast of "Mr. Burns" in one of many costume changes.

For all the abstract commentary on society and pop culture, Mr. Burns is grounded in its humanity. The interactions between members of the troupe (first-year Hana Eldessouky, second-years Jacob Goodman, Quinn Kane, and Rebecca Husk, third-year Tempest Wisdom, and fourth-years Lexi Turner and Rob Geada) allowed for this duality and held Mr. Burns together.

One thread that links the three acts is theater, and by extension, meta-theater, as the play slowly becomes more of a play-within-a-play. It’s about the repurposing and repositioning of pop culture—something so derivative of the culture around it that it deviates further and further from its source. Musical and movie references go from being relevant, to reminders of the past, to abstract post-cultural icons with unclear symbolism. Maybe though, in the end, Mr. Burns is just about coping and finding whatever entertainment and meaning you need in the interim—and you don’t need to be an apocalypse survivor to understand that.