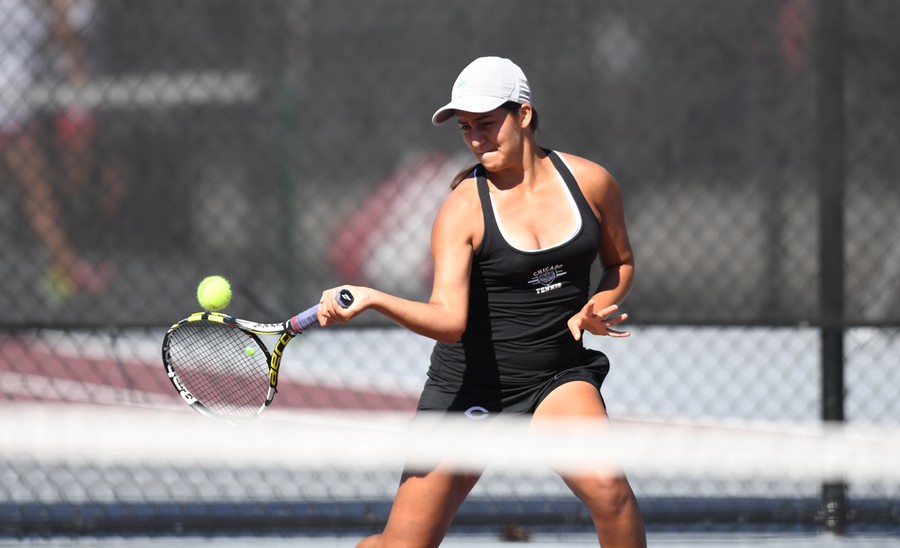 First-year Marjorie Antohi prepares to return the ball over the net.

The No. 10 South Siders of Chicago went 2–1 this weekend to finish third at the ITA DIII National Team Indoor Championship in Murfreesboro, TN. The Maroons repeated their 2015 semifinal victory over Wash U to come away with a top three finish at ITA Indoors for the sixth time.

The team started the weekend off strong with a dominating 7–2 win over previously undefeated host Sewanee on Friday afternoon. The Maroons swept the No. 13 Tigers in doubles play to take a 3–0 lead going into singles matches, as they have done several times already this season. Third-year Ariana Iranpour, first-year Marjorie Antohi, and second-year Rachel Kim each took down their opponents in straight sets to give UChicago victories at the top three singles spots. First-year Alyssa Rudin claimed a victory at No. 6 singles for the Maroons’ seventh win of the day. The No. 4 and No. 5 singles matches went to Sewanee in third set super tiebreakers.

On Saturday, the squad took the court against No. 6 Pomona-Pitzer for the semifinal match. After dropping two out of three doubles matches, the Maroons struggled to regain their momentum and fell 4–2 in singles play. The 6–3 defeat was the first loss for the Maroons this season. UChicago’s three wins of the day came courtesy of first-year Estefania Navarro at No. 5 singles, Rudin at No. 6 singles, and the pair of Iranpour and Navarro at No. 3 doubles.

Sunday’s third-place match featured a UAA battle between UChicago and No. 11 Wash U. Two out of three doubles matches went to extra points, with the Maroons dropping both No. 1 and No. 3 doubles by margins of 9–7 and 10–8, respectively. Rudin and fourth-year Tiffany Chen took No. 2 doubles by a score of 8–5. Despite a 2–1 deficit going into singles play, the Maroons quickly bounced back with straight set victories at No. 2, No. 3, No. 4, and No. 5 singles to clinch the 5–2 win. The No. 1 and No. 6 singles matches were left unfinished.

In the championship round on Sunday, No. 1 Emory University defeated Pomona-Pitzer by a score of 5–4.

Kim said of the team’s ITA Indoors performance, “This weekend we did a really good job staying positive throughout our matches and fighting for every point, even against our loss to Pomona-Pitzer.” She added, “We definitely could have had a better start in doubles the last two days, as sometimes we let the other team dictate the points, but we did a great job staying composed and coming back in singles.”

Starting the season with a 9–1 record so far, the squad hopes to continue its winning year when it returns to action on March 20 for the start of outdoor play. The women’s team will join the men’s team in Southern California for a spring break trip, where they will play three matches over the course of the week. Two of the three opponents—Westmont College and No. 2 Williams College—are scheduled, while the final opponent has not yet been decided.